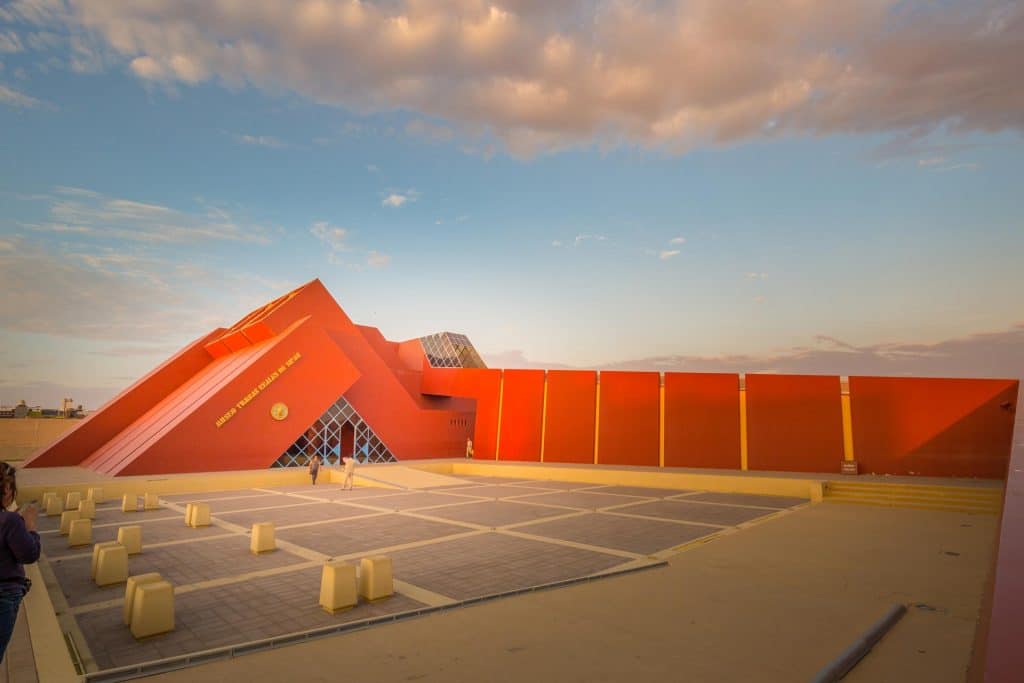 The Museum Tumbas Reales , also known as the “Museo del Señor Sipan”, was opened in 2002. It is located in Lambayeque, 15 minutes from the center of Chiclayo in the Lambayeque region on the north coast of Peru.

There, in the middle of a rather insignifcant urban area is a red pyramid with a truncated summit that contains a collection of objects all more extraordinary one another.

The site where this treasure was discovered is called Huaca-Rajada. It is better known today as Sipán. It is just over 1 hour from Chiclayo in the Valley of the Pyramids, the “valley of the kings” of this part of northern Peru. 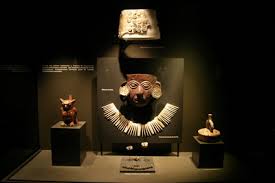 Talking about the Museum Tumbas Reales, returns to evoke the Moche or Mochica culture that has developed along the north coast between the 1st and 7th centuries of our era.

We speak about a culture that spread over a long coastal strip, with the center of the Temple of the Sun and the Moon, near Trujillo. However the Mochica civilisation extended much further to the north and the south.

We talk about a culture that has dominated the desert, was able to conquer the difficult land and make it arable and useful. Today, this may seem quite extraordinary. And the truth is that if you know just a small corner, sincerely yes it is.

We also speak about a culture recognized for its architectural qualities, its ceramics (see Larco Museum of Lima) or its goldsmiths. 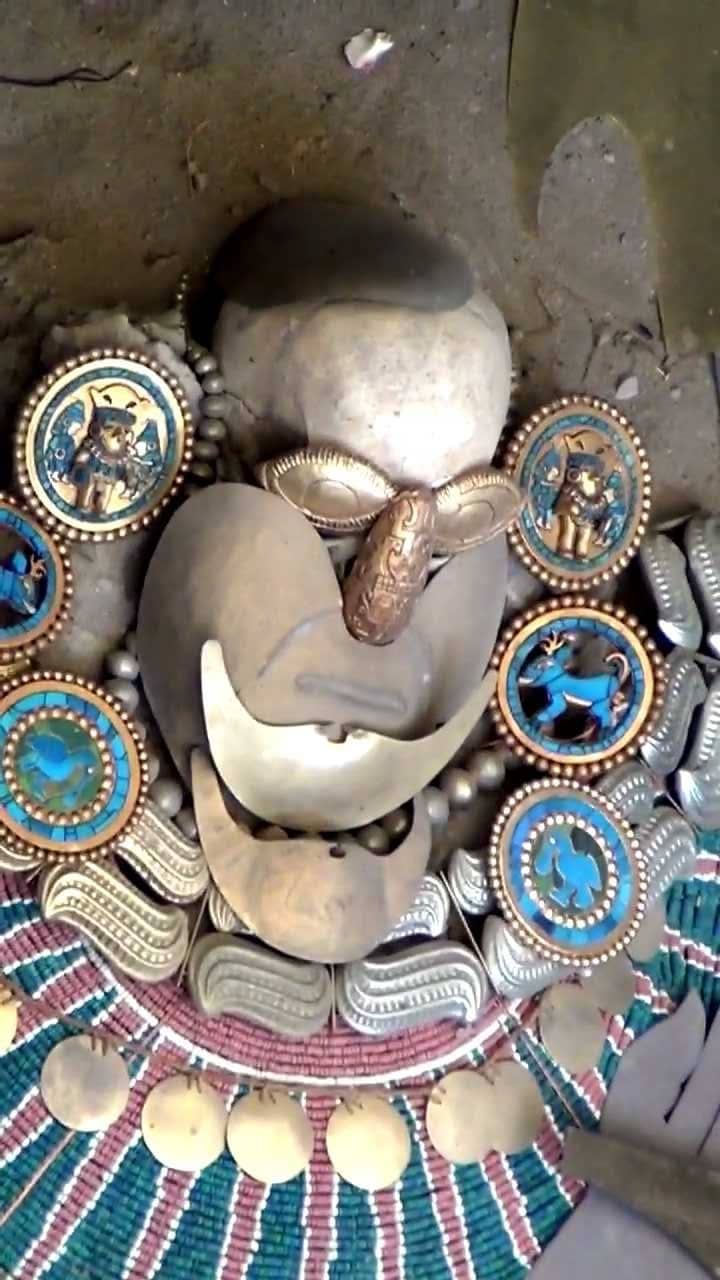 At the beginning of the year 1987, a rumour and the feeling as of a new gold rush. A band of looters has already stolen precious objects discovered in a Mochica tomb, near the town of Sipan in the north of Peru, in the Lambayeque region.

The police confiscated in the house of the looters, pieces of incredible wealth: Sculptures, objects representing jaguars, cats, and jewellery pieces. Rapidly, the whole world could not deny anymore that there was material for an important discovery. 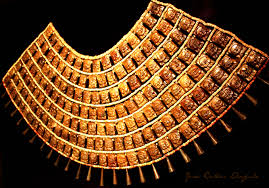 The necessary rescue of the treasure of Sipan

But it was necessary to act quickly because the news of a treasure buried in this valley quickly spread. The treasure could have been lost or disseminated to the 4 corners of the world through dealers and receivers of artifacts and archaeological pieces.

Early April of 1987, a team of archaeologists was ready to start the excavations, supported by 2 students… and guarded by 2 policemen!

After months of excavation, they got to find the intact burial chamber of a high leader of this extraordinary Mochica culture. Now it is sure to be an extraordinary site ! It was the first time an intact tomb with all its contents was discovered for new studies and researches.

1987 marked the beginning of an extraordinary adventure: a handful of archaeologists with few means, especially at the security level, proceeded to search and rescue one of the collections that would soon appear as one of the greatest discoveries of this end of the century. Have we not compared the discovery of the site with the discovery of the tomb of Tutankhamon in Egypt in 1922? The Newsweek Magazine had the title “The Tutankhamon King of the New World” in September 1993.

In terms of safety, excavations in Peru are not easy. The sites are often victims of attacks by “huaqueros” or grave robbers, in search of treasures and gold. And gold, precious metals and jewelry, the site of Huaca-Rajada abounds. It was necessary to quickly define a procedure to follow regarding the fate of this treasure. First, to preserve and restore it. That’s why we sent the pieces to Germany. 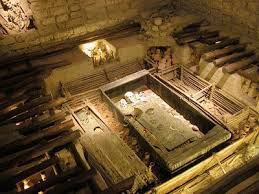 The Museum Tumbas Reales is one of the best museums in Peru. It contains more than 2,000 pieces of gold works, more than 400 gold, silver and copper jewels, as well as high quality ceramic and feathers jewelry.

It also shows the funerary arrangement of the Lord of Sipan, as well as the offerings that were deposited there. In fact, he was buried with his principal and secondary wives, a dog, two llamas and a guardian. To make sure that the guardian stayed in place, his feet were cut off. The Lord of Sipán was the supreme Lord of the Moche population around the year 300.

On the site, archaeologists have also discovered the previous tombs of the Ancient Lord of Sipan and the Sacerdote, the priest. 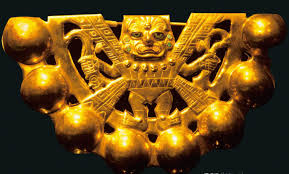 A place to house this fabulous collection

A place was necessary to expose the discoveries to the eyes of the whole world. It was decided to built a museum. to host one of the most fabulous collections of objects from the Mochica period. It is a unique testimony of the customs of the period, around 300 AD.

After some exhibitions through North American museums, the pieces now are in Lambayeque, on the north coast of Peru, not far from their place of discovery.

The museum was inaugurated on November 8, 2002 , not only with this incredible collection but also with its daring architecture. Architects drew a truncated pyramid, based on what would be the Moche pyramid in which the tomb of the Lord of Sipán was found. The entrance of the Museum is accessed by a long ramp, still modeled after the Mochica architecture.

Discover the depths of the Mochica culture

The museum has 3 levels that can be visited downhill as one descends to the heart of the pyramid, sanctuary of the Lord of Sipan.

We begin with the screening of a film about the adventure of Sipán and the museum. Then you can choose to make the visit with the help of a museum guide.

The first rooms explain the history of the Moche culture, its environment, territory, the valley, fishing, agriculture and social organization.

Another very important issue that is addressed is the spiritual world of the Moche. In the ceramics of the time, we can see the Moche deities. They explain their gods, their concept of life (from conception to death) and their notions of eternity.

Here the exposition shows all the objects of the Lord of Sipan: ornaments, necklaces, jewellery, tiaras, helmets, earrings, noserings – all made of gold, silver, lapis lazuli, turquoise, shells from Ecuador (with a precious value for that time), colourful bird feathers, the finest woven textiles, ceramics, sculptures… In total, the museum contains more than 2,000 gold works and more than 400 gold, silver and copper jewels.

There is also the state in which these pieces were discovered. Then, you can evaluate all the conservation and restoration work that has been done in Germany, at the Mainz Museum. 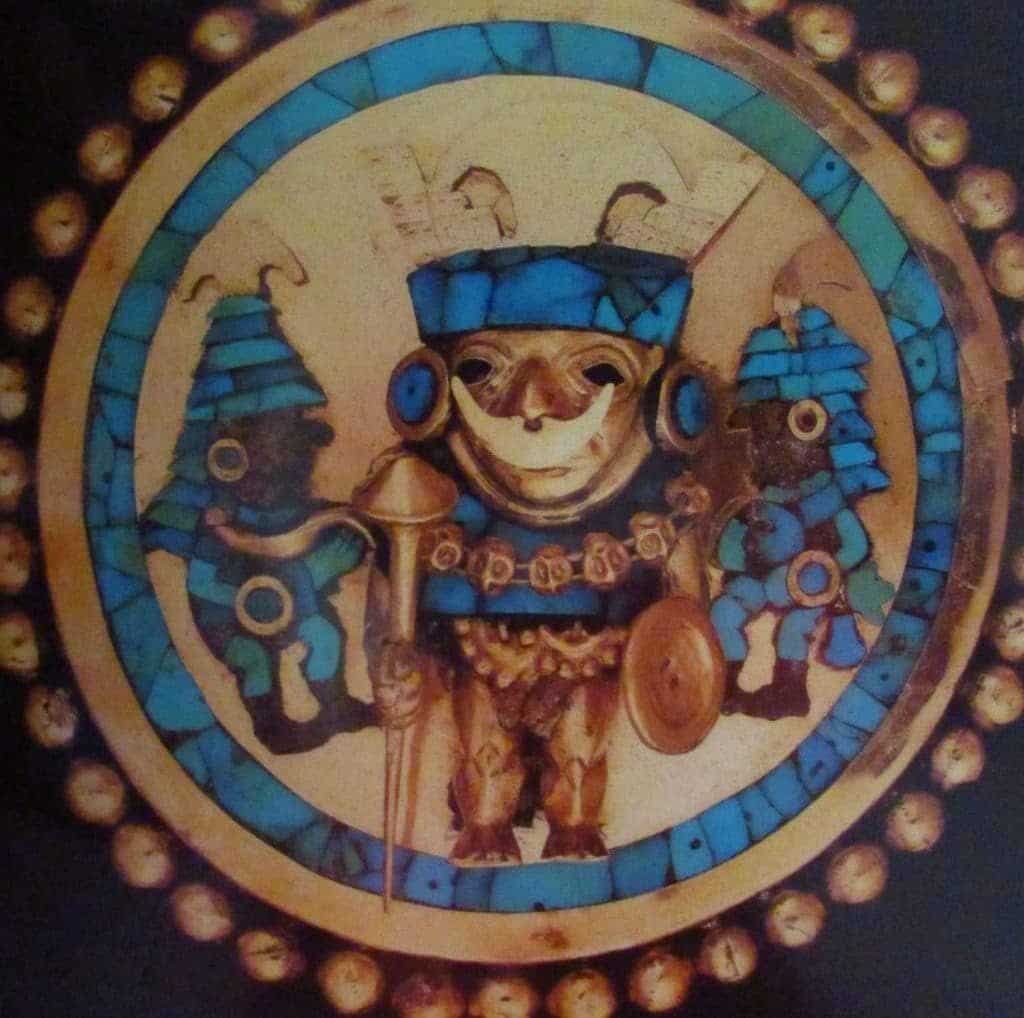 You will see other excavations on the site that have helped update other tombs. Some are even older than the Lord of Sipán, especially the Ancient Lord of Sipán.

In total, about fifteen tombs were found with each of the offerings, more modest than those of the Lord. This gave the site the function of Sanctuary.

The end of the visit is really nice

The visit of the Museum Tumbas Reales ends with a room where you can see wax mannequins in the “Casa real del Señor de Sipan”, the Lord’s courtyard. Around him, 35 animated mannequins move thanks to a special mechanism to make them realistic. All with a studied light and music played with native instruments.

In this representation, the Lord is surrounded by his close relatives to the right and to the left by religious authorities and musicians and by his army.

All the scientific work has been done on the physiognomy of the mannequins, to be as faithful as possible to the Mochica people, as well as to the fabrics, clothing and attitude of these characters.

A visit to the museum store?

In the store of the Museum Tumbas Reales, there are some reproductions of museum pieces and some books. And in Peru, there is no escape to an ice cream distributor.

Fortunately, they finally published the Spanish edition of the book “SIPAN, Descubrimiento e Investigación” by Walter Alva. He is one of the first archaeologists present since 1987. During my last visit in July 2016 the available book was in fact a catastrophe in printing and graphic quality. This new edition joined the English version of my library.

But it must be admitted that for a museum of such richness, it must have a shop with a little more to the level: bigger, more objects, and especially more books because the Mochica theme is huge and endless … We are not in Lima, but I think this is what deserves an international museum.

The ticket for the Museum Tumbas Reales is purchased at the entrance of the site. The museum is open from 9 am to 5 pm. Attention: the museum is closed every Monday.

You must leave your bag, backpack and camera in a free locker.

Some people will criticize the Museum Tumbas Reales , it is too organized, too studied. But the fact is that it is very well done and it is a very exceptional museum.

Other places to understand the Moche culture in the region

For those who wish to visit the place of the discovery of what is exhibited in the Museum Tumbas Reales, it is possible to go to Huaca Rajada. Since 2009, the site also has a museum on the site: there are some craft demonstrations.

The pyramids and the Túcume museum

The site is just less than 40 km from Chiclayo. The museum is more modest but very didactic. A good stop if you’re heading from the coast to Olmos and the Andes.

The surroundings of Trujillo

To follow the fascinating subject of the Moche culture, discover the sites around Trujillo, 220 km south of Chiclayo. Do not miss the Temples of the Sun and the Moon, or the archaeological complex of El Brujo and the famous Señora de Cao.