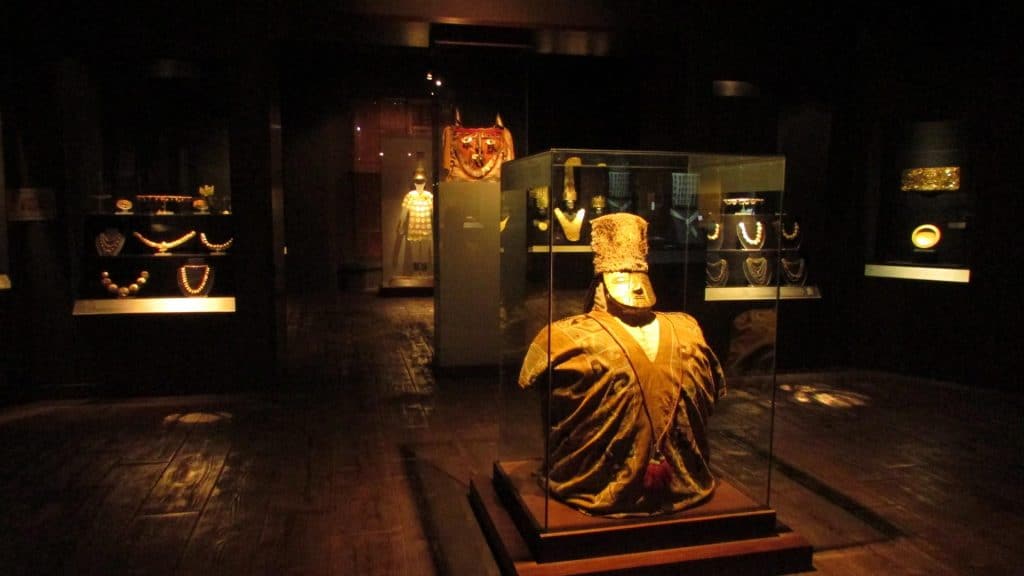 Whilst travelling in Peru, even if your travel will guide you to the north, one of the obligatory passages is Lima. Which is a great thing, as you can enjoy the many museums and cultural activities offered by the capital. Today I want to share with you a visit to a wonderful museum located in the district of Pueblo Libre, in the block 15 of the Simon Bolivar Avenue in Lima, the Larco Museum.

This museum houses the collections of a man from a wealthy family of Trujillo. He left Peru in the decade of 1920 to study finance in the USA. When he finally returned, he dedicated his time and energy to archaeological research of pre–Columbian civilizations.

We owe Rafael Larco Hoyle most important discoveries in the field and also the development of a chronology of ancient Peru, still relevant today with the latest discoveries that have confirmed his theories.

The Museum was established in the family home on the ranch near Trujillo in Northern Peru in 1926 and it was transferred to Lima to its current location in 1958.

A place that invites to reflection

The building that houses the Larco Museum is already worth the trip. It is situated in Lima, but it just has an air of the houses in Trujillo, the hometown of Larco. All over you see the climbing Bougainvillea and giant Daturas, even olive trees, ferns – it’s just a beautiful garden !

But let’s talk about the museum: first the things that bothered me. Admission 30 soles, 25 soles for over 65 years and 15 soles for students or minors. Interestingly, the museum entrance has to be paid in cash. Don’t worry! There is an ATM in the lobby !  We would have liked to keep the entrance ticket as a souvenir, but we didn’t receive any. (Amendment: on our next visit in June this year, we could pay with visa card and we got a ticket !) 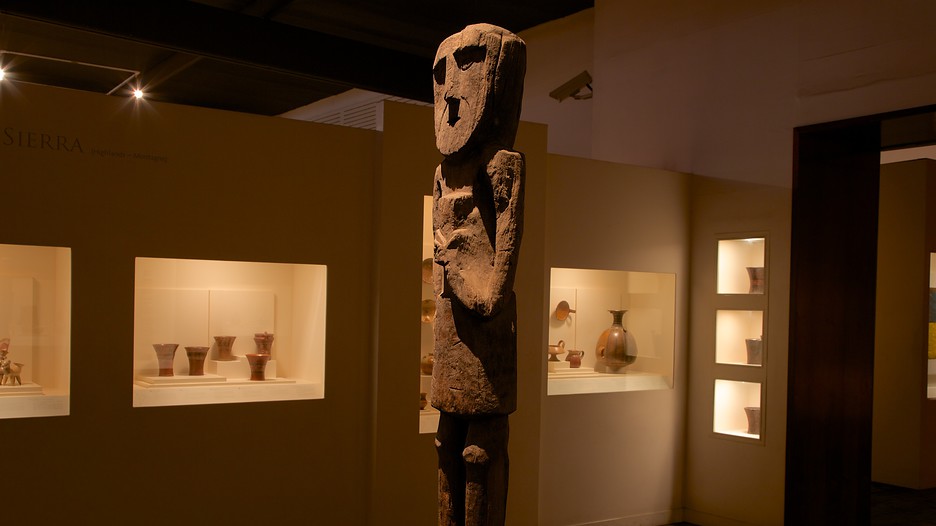 You reach the Museum entrance by a long ramp. Another check-point at the entrance to the exhibition halls. We have a seat in the little theater for the 10-minute introductory movie. (We watched the Spanish version with French subtitles, but you can also have an English version with German subtitles.) And now we start our tour.

An impressive collection of Pre-Columbian objects

This beautiful Larco Museum is here to show us that Peru is not only reduced to the Inca era. We just know more about the Incas, as this was the dominant culture when the Spaniards arrived in 1532. They wrote and made drawings of everything they found. But the history of Peru is much older and complexe with fascinating and most organised pre-columbian cultures. 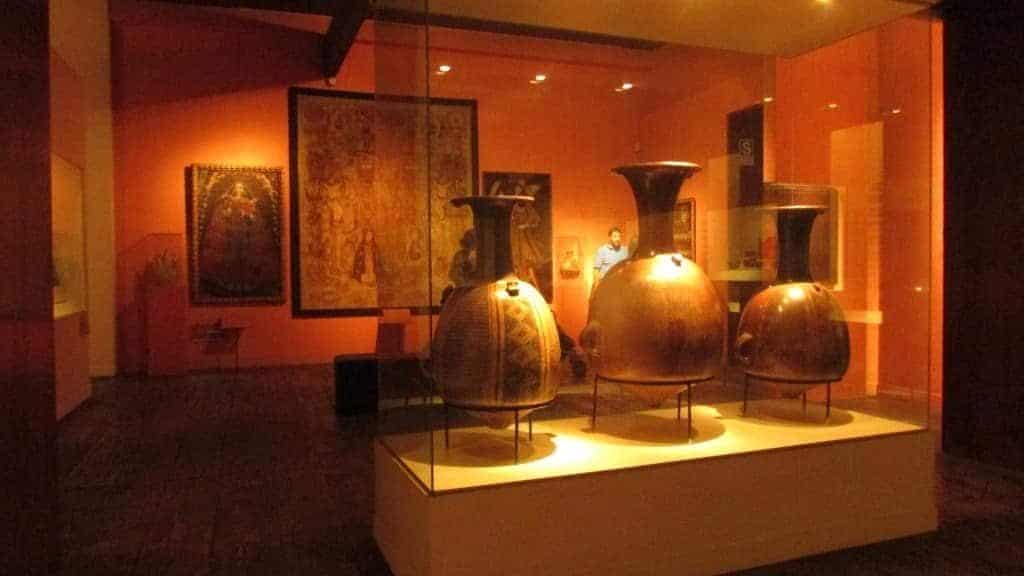 In the Museum, we find particularly the Moche and Chimu cultures. We know them already from our visits to the monuments of northern Peru, Trujillo and Chiclayo. Moche Ceramics, whose great period was between the 1st to the 8th century BC, taught the archaeologists a lot about the habits and customs of the time. In fact, as this culture did not have any writing, daily life was told by the realization of ceramics. They also used the ceramic for funeral purposes. The dead were buried with a more or less important collection of ceramics depending on the importance of the deceased. Use of moulds allowed the production of pieces in large quantities. The quality of realization is simply amazing in details and finesse.

We continue from one exposition room to another and the objects get more and more precious. Gold and silver ornaments demonstrate the skills of the artisans of the time. They used gold alloys – copper and silver permitted them to use fewer of these metals that the Europeans later on would call “precious”.

The Larco Museum also features other cultures along the Moche and Chimu, such as the Nazca further south or the Huari, the Pachacamac and of course the Incas. Regarding the explanations, you can find all the texts translated into 5 languages minimum: Spanish, German, French, Japanese and English.

The importance of  sacrificial ceremonies in Pre-Columbian cultures

Entire rooms are devoted to sacrificial ceremonies, the ritual combat between warriors to select the future sacrificial victims, but also to expose the objects they would use, as well as the religious dishes.

The highest warriors were dressed in sumptuous style with ornaments and other earrings, bracelets…  As weapons they had sticks, spears and javelins. 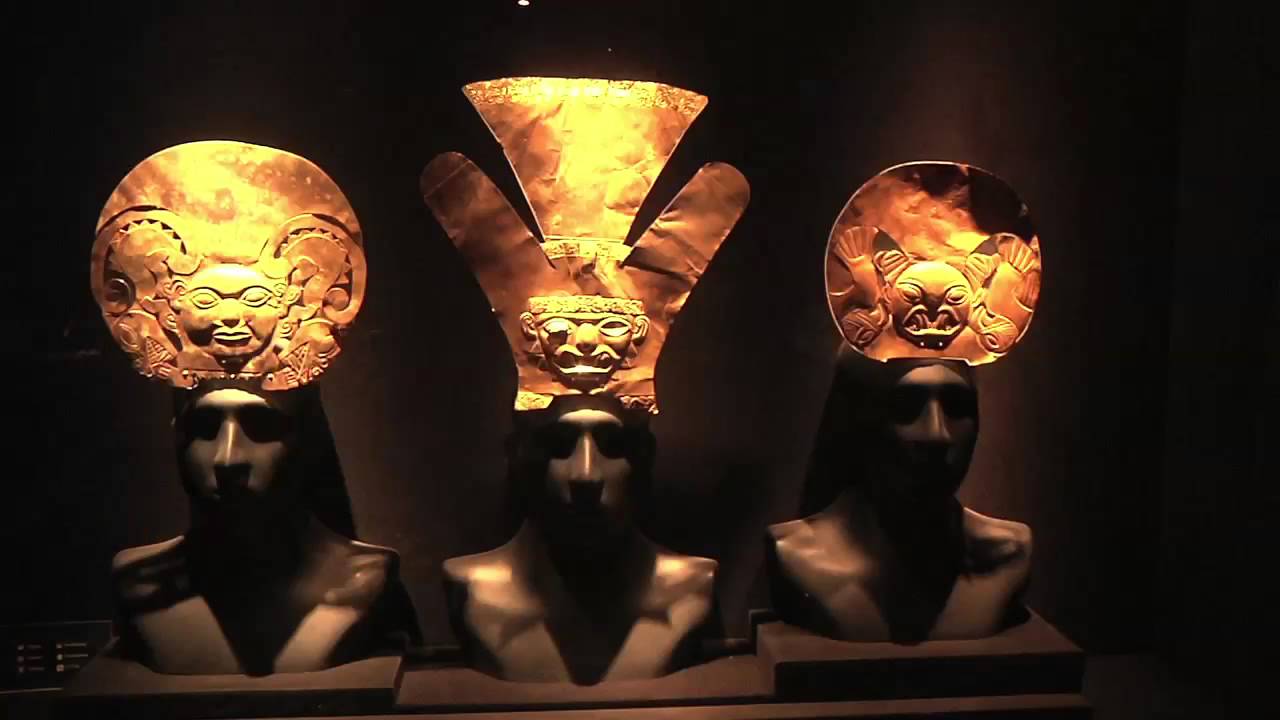 The objective of these fights was not to kill the other one, but to “catch” him to offer him to the gods as a sacrifice. Therefore, it was enough to remove his helmet and held him by the neck to declare the fight finished. You could definitely say it was a fighting “ritual”.

After the battle, they would undress the losers, with their hands tied behind the backs. Then they were taken with others in front of the “priests” who officiated such ceremonies and prepared the sacrifice. At least one of the “sacrificed” had to be killed with the sacrificial knife or “tumi” whose blade was shaped like a crescent moon to collect the blood and offer it to the gods as an appeasement. The Moches weren’t very funny as a civilisation…

The Moches, were they the most flirtatous?

Well yes, all these singular objects are in relation with the vision that the Moche had about fertility of the land or any living things. In the Moche culture there is nothing more natural, as it is part of life. Mother “modesty” has to wait… outside the museum.

This place is also dedicated to gastronomy

Within the new Larco museum, there is a fancy restaurant overlooking the gardens of the latter. A varied menu with local accents. It is not one of the most affordable ones, with prices for sandwiches at 25 soles, which is about 7 USD, main courses between 45 and 50 soles, and a great dessert menu between 15 and 20 soles…

But on the other hand, it is a beautiful place for a relaxing stop. The museum is open until 10 pm. Apparently, it is beautiful at night when the gardens are lit.

The opportunity to enter in Larco Museum’s reserves

A special feature of the Larco Museum is the opportunity to visit the “reserves” I mean, where you can see all the possibilities of exposure available to the Museum. In total, they have over 45,000 pieces. Here, they are arranged by topic.

Impressive and very original. We imagine that we are walking through the reserves of our great Museums such as the Louvre in Paris or the Art Institute of Chicago. Ouahhh… well, here they open for you the doors of the Holy Grail.

We end the tour passing through the store. You can find some smaller replicas of Moche culture, bags, fabrics, books and other souvenirs. We leave with the offical book of the Larco Museum that exists in many languages. And for the store, unlike the entrance ticket, here you can pay with Visa or Amex…

All in all, a recommended visit for lovers of archaeology of Pre-Columbian times, beautiful golden objects, but also nice places and a beautiful and quiet restaurant.