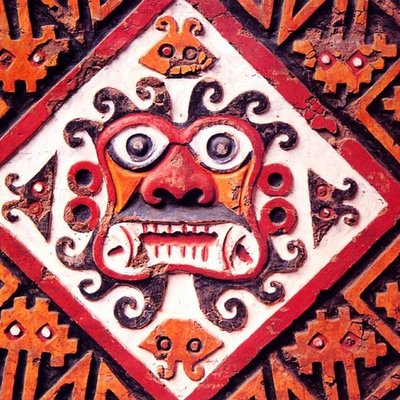 Just 30 minutes outside of Trujillo, the Sun and Moon Temples are a very important archaeological site in the region of La Libertad, on the north coast of Peru.

Its construction was carried out for several hundred years. It was made by the Moche Culture (pronounced Mot-ché) who lived between 100 and 800 d. C. Les Moche had a strong social, political, military and religious organization.

The role of the Sun and Moon Temples

In its heyday, the Moche city spread over 100 hectares. Two monumental buildings dominated at the ends:

The visitors of the time were undoubtedly impressed by the visual impact of the Sun and Moon Temples. Its colossal size was enhanced by the colors red and yellow. The impression of grandeur was accentuated even more when the visitor entered the city. They found public buildings, palaces and residences of the elite, but also the workshops of various craftsmen (pottery, weaving, goldsmiths) and public squares.

Evidence was found of canals that brought water to the residents of the city. This indicates that the city was one of the most significant and important examples of the state power of Les Moches.

The Temple of the Sun

This temple is probably the largest adobe building in America! Its construction used around 140 million of adobe bricks. People like to say that it was built in only 3 days by 250,000 men. Its size is colossal: 345 m long, 160 m wide and 30 m high.

It has a cross shape with a short cross branch. Unfortunately, the Temple of the Sun has suffered a lot because of the weather and you will not be able to visit it during your trip to Peru.

It had political and administrative functions. It is believed that some members of the elite also lived there.

The Temple of the Moon

The Temple of the Moon consists of:

To better imagine what it looked like, have a look at the computer-generated pictures below.

What we are currently seeing is the result of at least 5 different structures, built on top of each other for about 500 years. Each time, the old building was buried with a ceremony. The spaces were filled up with adobe bricks and they built a new floor on top. The new walls of the corridors and squares were built and apparently a new facade was added on the north side. This procedure allowed the expansion in width and length.

After 17 years of excavations and archaeological research, we still know very little about the oldest structures of the Temple of the Moon, still buried.

Inside the Temple of the Moon there are bas-reliefs representing animals, geometric figures and deities, including the god Aiapaec. This temple was an important political and ceremonial seat. On the side of the temple, archaeologists have discovered a tomb with the remains of 40 sacrificed warriors. 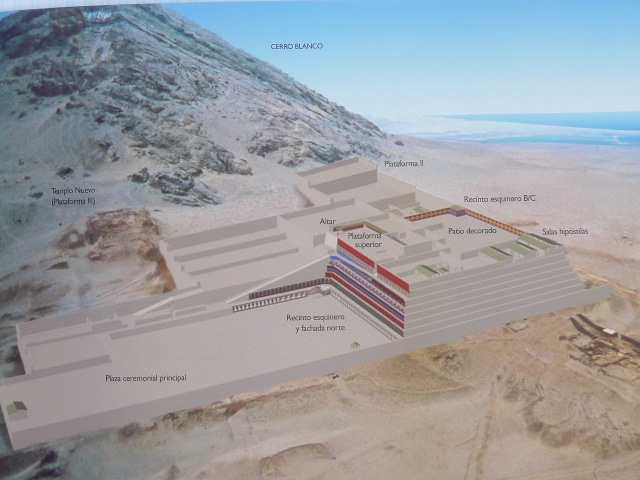 According to the legend, at the time of the decline of the Temples of the Sun and the Moon, the artists would have gone to the jungle, while the authorities and the military would have gone to Chan Chan. This could be supported by the more geometric representations of the Chan Chan temple. 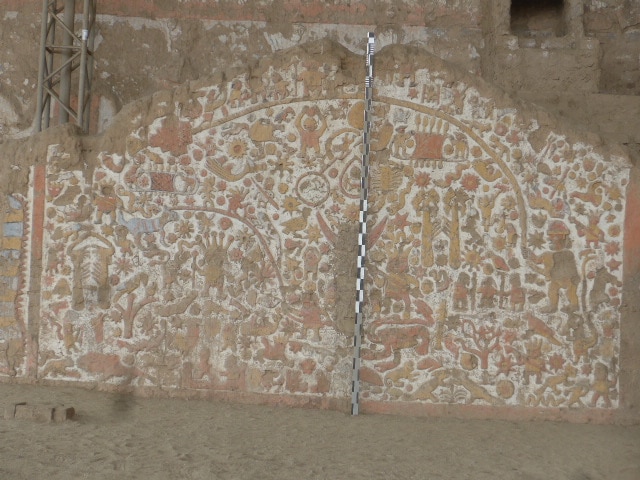 How to get there?

From Trujillo are 10 minutes by Taxi and public transport , you can also take organized excursions that includes the archaeological site of Chan Chan.