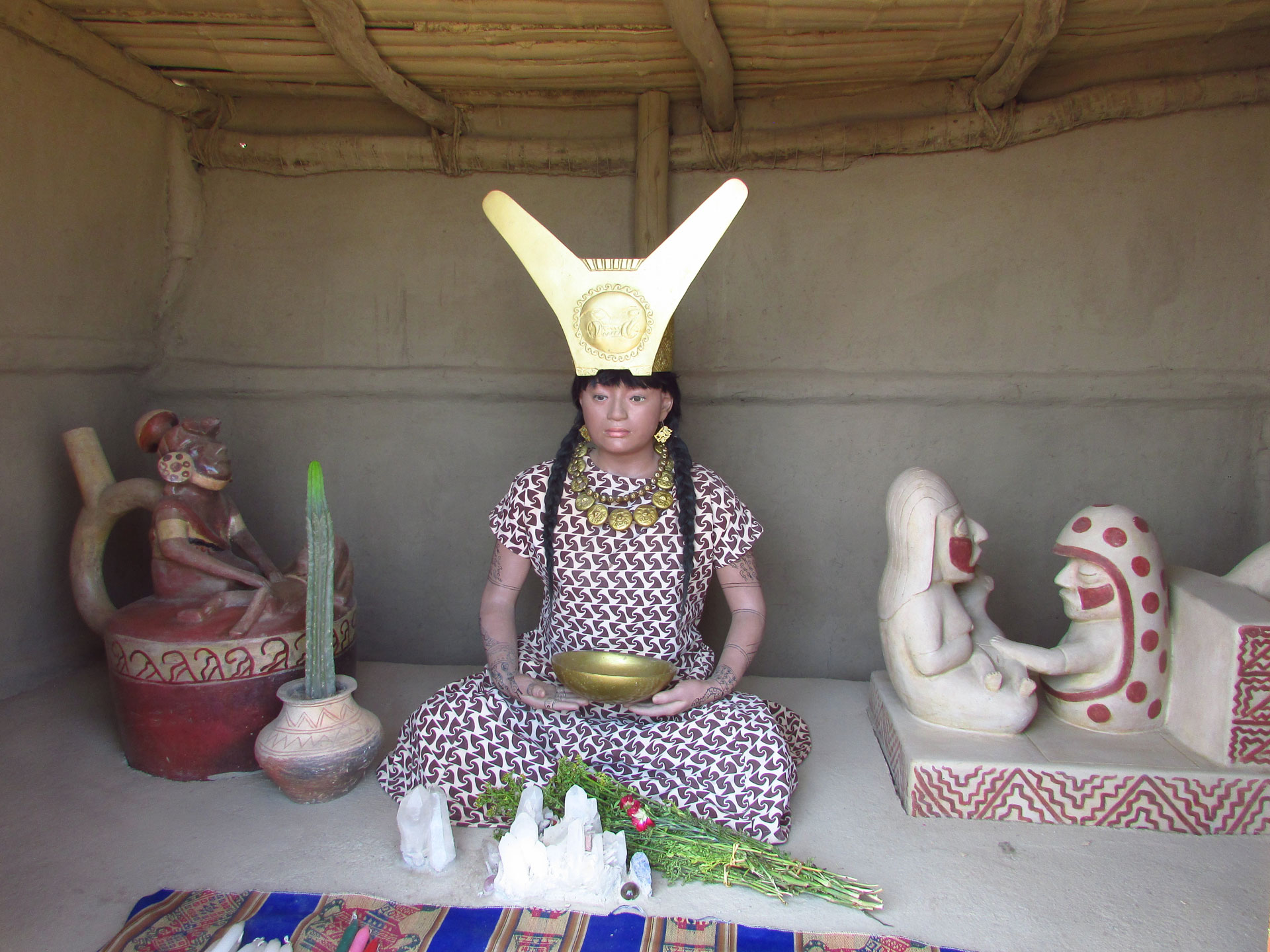 The Archaeological Complex El Brujo and La Señora de Cao are located on the suburbs of the city of Trujillo, about 60 km to the north.

The visit of this site left me with a very strong memory. There are things that are not always explained. El Brujo, as soon as I arrived at the site, filled me with incredible energy without really knowing what was happening to me.

El Brujo has been inhabited since the pre-ceramic era. However, the largest constructions date back to the Moche culture between the 1st and 5th century AD. This archaeological site has significant differences with the Temples of the Sun and the Moon, also near Trujillo. This exceptional site will undoubtedly be part of your archaeological trip to northern Peru.

The main monuments of El Brujo

The site was also occupied by Spanish settlers who built houses and churches. But what we are particularly interested in is studying the previous occupations.

El Brujo contains 3 pyramids from Mochica and Sicán times. These temples, built entirely of adobe bricks, are richly decorated. Archaeologists have found jewelry and ceramics of incredible fineness. It says a lot about the art of living of this culture.

It is the main Moche sanctuary of the complex. This temple is a truncated pyramid of 27 m. It dates from the first centuries of our era and was used until the ninth century. Today it is the best preserved temple of the site.

It is composed by :

In front of the main facade of Huaca Cao. A surprising energy emerges from these places. Imagine these places, these walls with the best of their splendor! I admit, I was amazed.

There are multicolored frescoes that represent warriors, prisoners, priests and human sacrifices.

This is the second most important building on the site. It is a truncated pyramid, built in adobe at the time of Los Moche (100 – 800 AD). Therefore, it is contemporary of Huaca Cao Viejo, from where it is located 500 m. It is 103 m long, 98 m wide and 22 m high. This pyramid has bas-reliefs representing characters in war.

In the center of its southern facade, there is a long and deep fault (45 m long, 5 m wide), that almost divides the Huaca in two. That’s where his name comes from. This failure was made after the conquest of Peru by the Spanish in the sixteenth century. The looters would have come to find the treasures hidden inside.

The north coast of Peru has been occupied since ancient times (see our article about Caral).

Huaca Prieta is the oldest temple on the site. It was built around 2 500 BC and new experiences related to the domestication of plants were made there. These first agricultural experiments set in motion the development of the fishing industry of Huaca Prieta. The domestication of cotton, for example, allowed them to perfect and strengthen the ropes and fishing nets. Calabaza, a kind of pumpkin, was used as a floating element for nets.

The feeding of fish, crabs, sea urchins and other molluscs was complemented by new agricultural crops such as el ají (peppers), pallares (a kind of large white beans) and chira (a type of banana). Therefore, Huaca Prieta marked the emergence of an economy based on water, the ocean as well as the river. The first images produced by its inhabitants mixed the values of the ocean with those of the mountain: crabs and seabirds joined the condors and snakes. Some people think that with these images, it was the first time that one tried to show a certain way of seeing and appropriating the landscape.

During archaeological excavations, human remains were found inside. Recently, there have been sessions of cleaning, purification and flowering in the interior. They were made by a healer from the town of Magdalena de Cao. This ritual aims to reestablish a symbolic contact with the magical-religious world and live a unique experience in the depths of this ceremonial well, which represents a symbolic return in “the womb of Mother Earth or Pachamama” to be reborn. 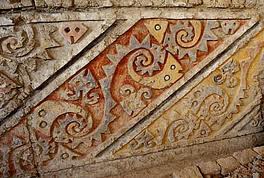 The story of the Lady of Cao

The archaeological complex El Brujo became famous thanks to Señora de Cao, whose mummy was discovered in 2005 in a tomb below the Huaca Cao Viejo. It is stored in the museum of the site.

During my visit to the temple and the El Brujo Museum, I had the luck and pleasure to meet the archaeologist Regulo Franco Jordan. He was in charge of the excavations in 2005, during the discovery of the Lady of Cao.

Mr. Franco offered to accompany me to the ceremonial wells discovered a few hundred meters from the site. On the way, he introduces me to a shaman present on the site and who is preparing a ceremony.

While we walk and talk, I ask a question somewhat indiscreet. I ask him as simple as possible, trying at the same time to ponder my words, how to explain that a person like him, with a scientific background validates shamanic ceremonies, like today around the lady of Cao. Yes, it was a bit daring, but I got a very nice story.

The Discovery of the “Lady of Cao”

He told me about the investigation they had been doing for a while. One night there was a ceremony with a shaman and he participated. We use the famous San Pedro, this type of plant with psycho-reactive effects of cactus (here we do not say hallucinogen!)

He tells me that during the ceremony, he began to see forms, even animals. He saw a puma suspended on the hill that protected the temple where the tomb of the lady of Cao would be discovered. This is why he searched the site and the surroundings, but without really knowing what he would find, let alone the grave of a woman. But that night, the shaman told him that there he would find the woman who would make him famous. Isn’t that a great story ?

In any case, I appreciate the opportunity that has put Mr. Regulo on my way that day. Very humble, smiling and passionate about his “lady”.

The incredible wealth that surrounds the mummy

The mummy was wrapped in 22 layers of cotton fabrics. The funerary burden measured 181 cm by 75 cm wide and weighed 120 kilograms.

In layers 22 to 13, we found cinnabar, a toxic substance that was crucial in the preservation of the mummy. Between these layers ornaments peculiar to their sex and social condition were placed. Among them, there were 23 gold, silver or copper necklaces and a large quantity of precious stones. On her chest were Nose ornaments carefully wrapped in cotton fabrics.

Between layers 12 to 6, the archaeologists found mainly textiles.

Between layers 5 to 1, there were textile and metal offerings, such as copper plates to gold threads. She had also put on crowns, diadems and two ceremonial sticks made of wood and copper, which were symbols of the power she had in Moche society.

She had tattoos with snakes, spiders and geographic patterns on her face, legs and arms. The meaning of his tattoos remains a mystery.

The use of mercury sulfide (cinnabar) has eradicated the bacteria that could have damaged the mummy and that is why today we can still see her tattoos.

According to the archaeologist Regulo Franco, her tattoos indicated that she possessed supernatural powers, and perhaps she was a shaman woman, priestess and healer.

The Lady of Cao was between 25 and 30 years old at the time of her death, around 450 AD. She measured 1 m 48. And she must have had an important status in the Mochica hierarchy, very close to that of the Lords of Sipán discovered in Huaca Raiada.

Her tomb is that of a sovereign, in a magnificent enclosure decorated with representations of the magical-religious world of Moche. After the apogee of the Lord of Sipán, between 300 and 400 d. C., The Lady of Cao may have been the most powerful woman in the history of the Moche and the Andean culture as the “queen” of the Moche culture. She is supposed to be contemporary with the Lord of Sipán?

The fact that a woman has been identified as a queen is extremely important to the story! Until now, it was assumed that only men had an important position in society. The women were in charge of domestic chores. This was the case in the Inca culture. Since this discovery, it seems that in the Moche culture, present in the north of Peru, a woman could also have the status of leader. Revolutionary!

Of course, we found all these details in the Cao museum. The building, quite austere, is made entirely of concrete. The armed guards protect the surroundings of this place that literally contains a treasure.

The site is very close to the ocean, it is very beautiful, but also very isolated. Only sugarcane fields surround this incredible place. The famous Cartavio Rum comes from here. We passed the distillery along the coast from Huanchaco to Magdalena de Cao, the town closest to the site.

In addition to explanations about the archaeological site and the eras, the museum has a very special room.

In fact, this room contains the most personal objects of the lady, as well as the same mummy of the Lady of Cao.

But be careful, you can not look at it directly. It is the reflection of it in a mirror located vertically of the mummy. Beyond her death, one fears the magical power of the almighty priestess!

I repeat it without a doubt, the visit of this site and the museum, is really something very special!

At the beginning of July 2017, the Ministry of Culture of Peru presented a reproduction of the face of the Lady of Cao. This replica made with a 3D laser of the mummy’s skull required 10 months of intense work. It was carried out by archaeologists from the El Brujo Archaeological Complex, the Wiese Foundation and FARO Technologies. 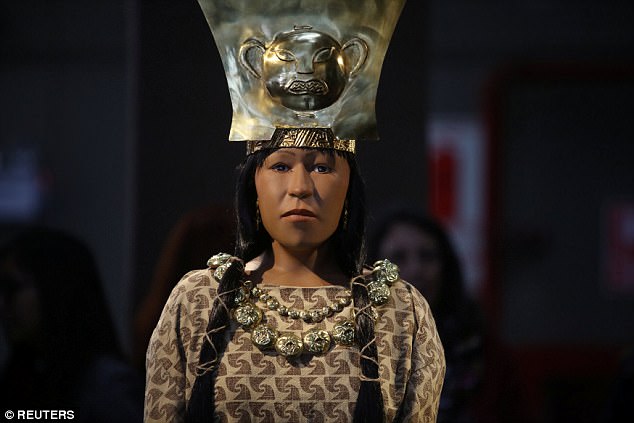 The reconstruction to see in the museum

The site is open every day from 9 am to 5 pm. The general visit costs 10 soles.

El Brujo is a 1-hour drive from Trujillo.