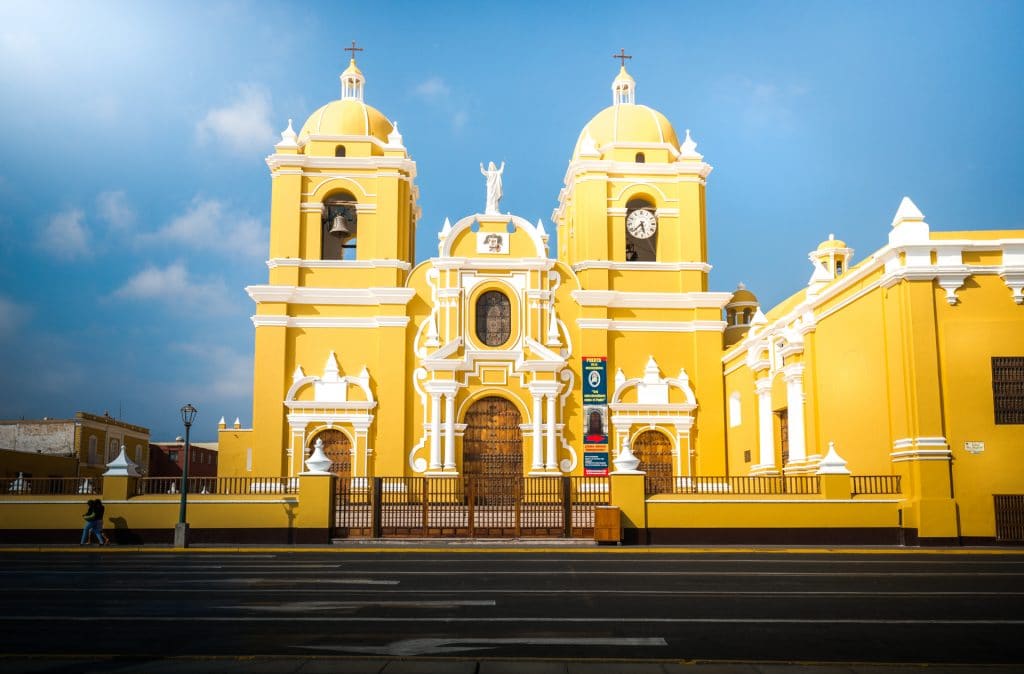 The essentials of Trujillo

Trujillo, the capital of the La Libertad region, is located on the Northern coast of Peru. It is the 3rd largest metropolis in Peru after Lima and Arequipa.

The city is often described as “Egypt of South America”. It was the headquarter of the Moche, Sicán and Chimú kingdoms. These are very sophisticated pre-Columbian and pre-Inca civilizations that have managed to thrive in the heart of one of the driest regions in the world. In the valley of the Moche River, there are more than 2,000 archaeological sites!

But Trujillo is also:

Since 2012, with the help of IBM, Trujillo has embarked on a Smart City project.

Like any Peruvian city that respects itself, Trujillo has a Main Square in the center of the city. But here it is not just a Main Square, it is the largest in Peru! It was built during the founding of the city in 1534 by Diego de Almagro, and recognized the following year by Pizarro. A little anecdote, the city is named according to the birthplace of the celebrate conqueror in honour of him!

When we arrive at the square, we are inevitably challenged by the colorful buildings that surround it. 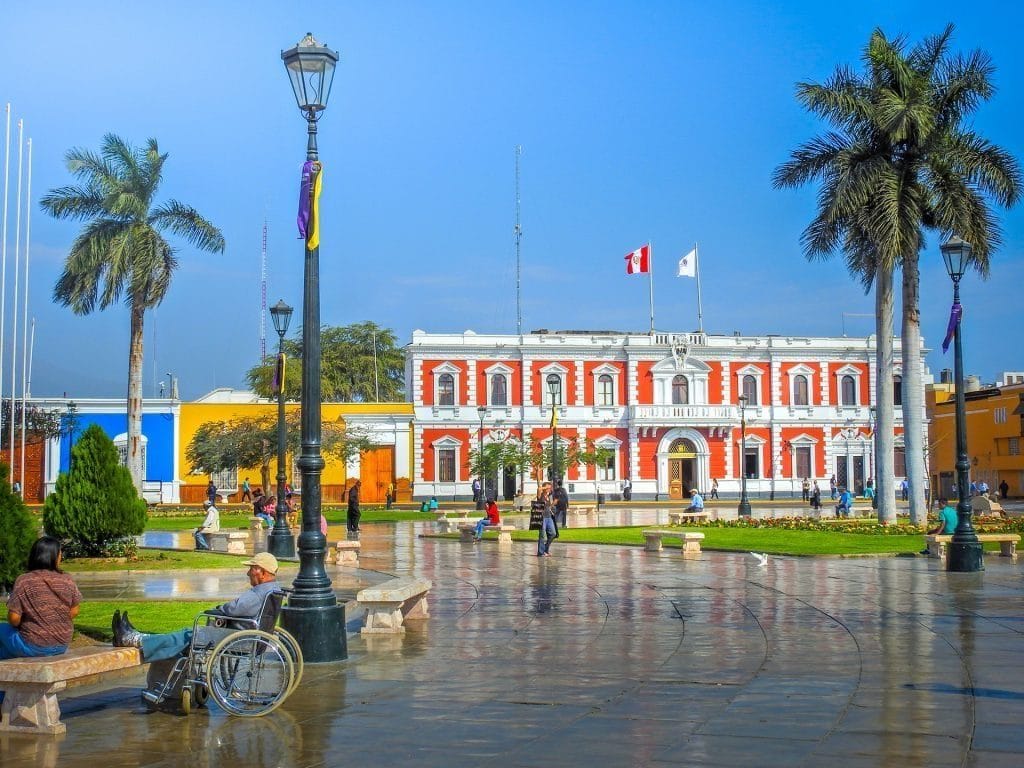 Yellow mustard, reflects the sun’s rays. And even on gray days, it brings a little light on the place with its Baroque and Rococo style. It was built since the founding of the city, but today it is only a reconstruction. The original cathedral was destroyed by the earthquake of 1759. 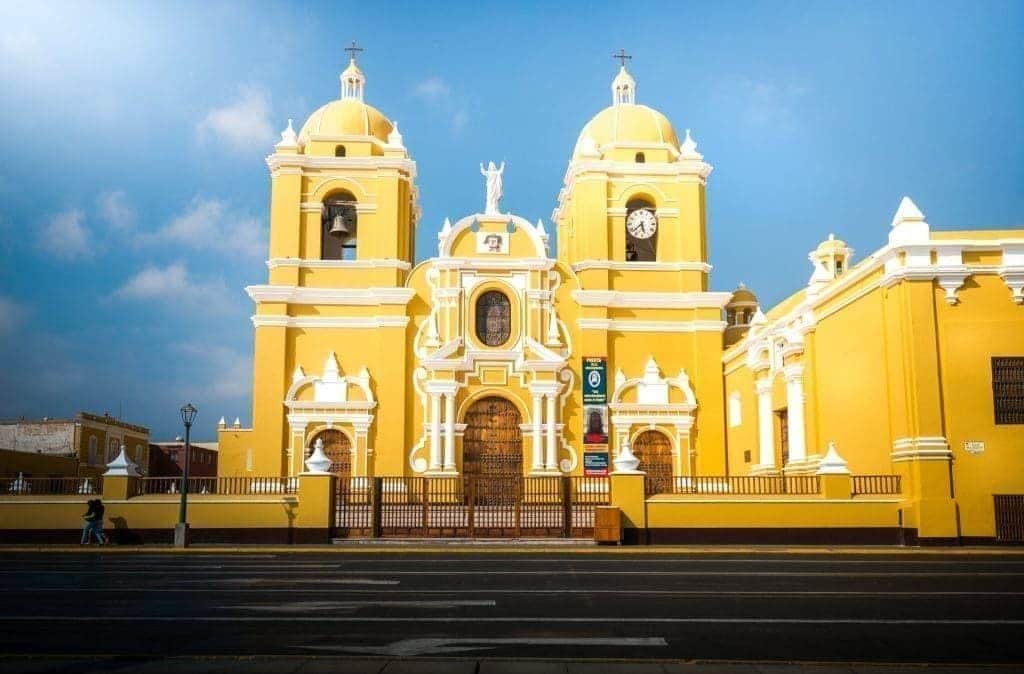 The yellow of the cathedral highlights the bright blue of the City Hall. It was built much later in the 19th century. It has a very elegant neoclassical style. Unfortunately, it also suffered from an earthquake in 1970 and lost its 3rd floor. You can still visit it and enjoy a beautiful view of the square from the balcony.

The center of the square

In the center of the Plaza de Trujillo there is a large marble statue carved by the German artist Edmundo Muller. It represents Liberty in reference to the proclamation of the independence of December 29, 1820. Trujillo is the first Peruvian city that General San Martin frees from the Spanish crown with the help of the Marquis of Torre Tagle. 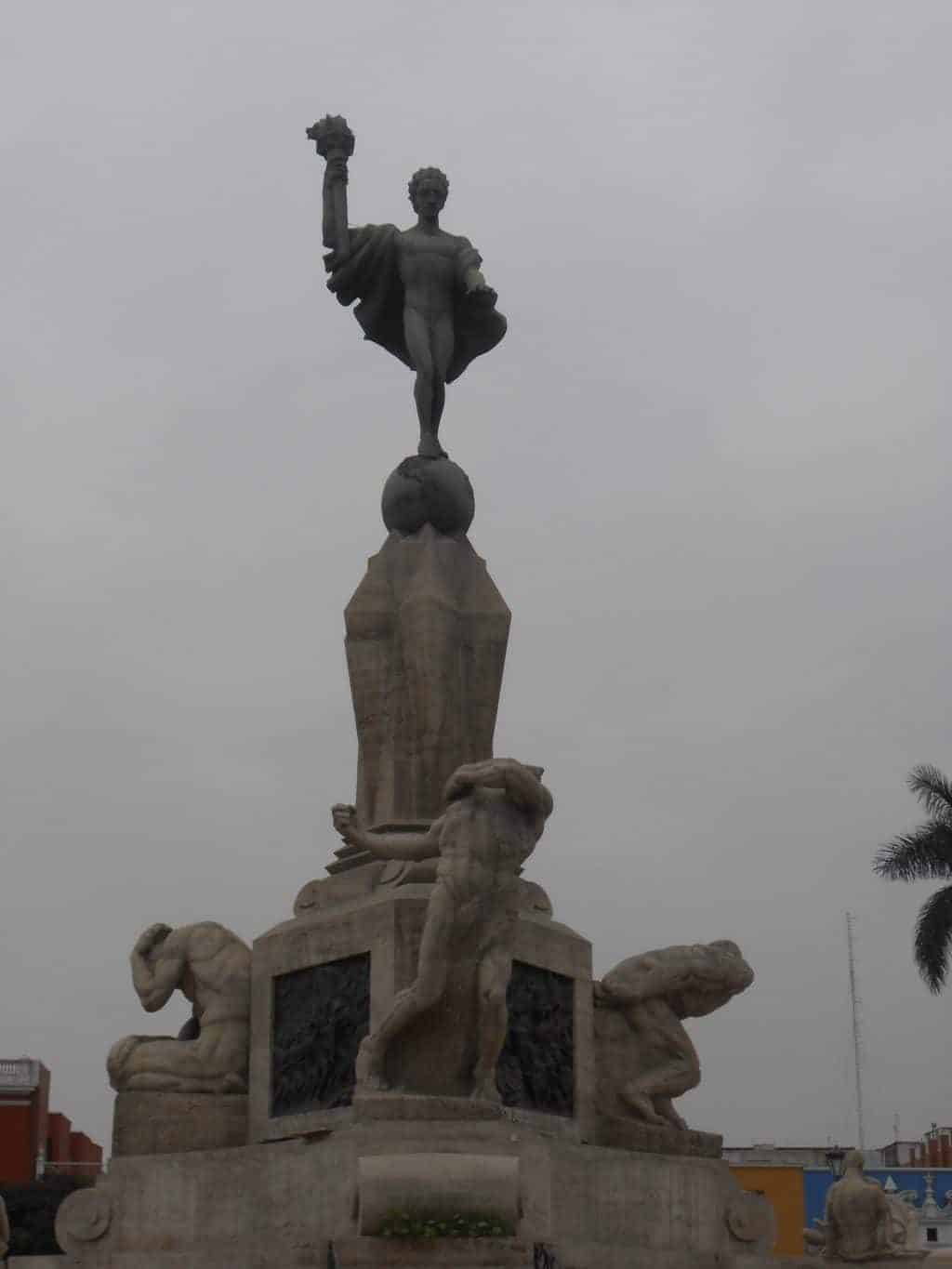 The colonial past inscribed on the walls

What makes Trujillo charming, are the many houses inherited from the colonial era. In fact during the conquest Trujillo is one of the first cities founded by the Spaniards. Before the creation of Lima, Trujillo is the capital of the Vice-Kingdom of Peru. This historical past can be read at the corner of each street in the center of the city. Trujillo was, and still is, an important economic and commercial center. The rich landowners had beautiful houses built in a very particular style. Recognizable by their wooden balconies, the colonial houses are as sumptuous on the outside as in the inside.

Among the most beautiful ones in the city, I will quote:

– The house Ganoza Chopitea, with its Rococo pediment and two lions.

– Urquiaga house, neoclassical style. Simón Bolívar stayed in this house where he organized his campaign and created the Superior Court of Justice. You can see Bolívar’s office, the gold ornaments of the Chimú culture.

It is also possible to visit the House of Emancipation, a historical landmark. Right here the Marquis de Torre Tagle wrote the declaration of independence that made the liberation of the city possible. Let’s not forget that the liberation of Trujillo, like  Chachapoyas, played an important role in the independence of Peru that was proclaimed in Lima on July 28, 1821. It was also the seat of government in 1824 when the army of Bolívar  stopped there.

While you walk through the city do not forget to take the Jiron Pizarro. This street that bears the name of the conqueror is undoubtedly one of the most beautiful in the city. Your eyes are inevitably attracted by the numerous carved wooden balconies. Don’t miss the particular one at 314 Casa Tinoco, built in the sixteenth century. This is where the first flag of independence was drawn in 1820. This historic building also has magnificent balconies.

Beyond the center of Trujillo

Before the arrival of the Spaniards, the Moche and Chimu civilizations lived in the Trujillo region. Around the city, it is possible to visit unusual sites inherited from these civilizations.

Chan Chan was the capital of the Chimú kingdom before falling into the hands of the Incas. The largest city in the world built in adobe seems to come out of the desert like a mirage! It is located a few minutes north of the city, on the road to Huanchaco. 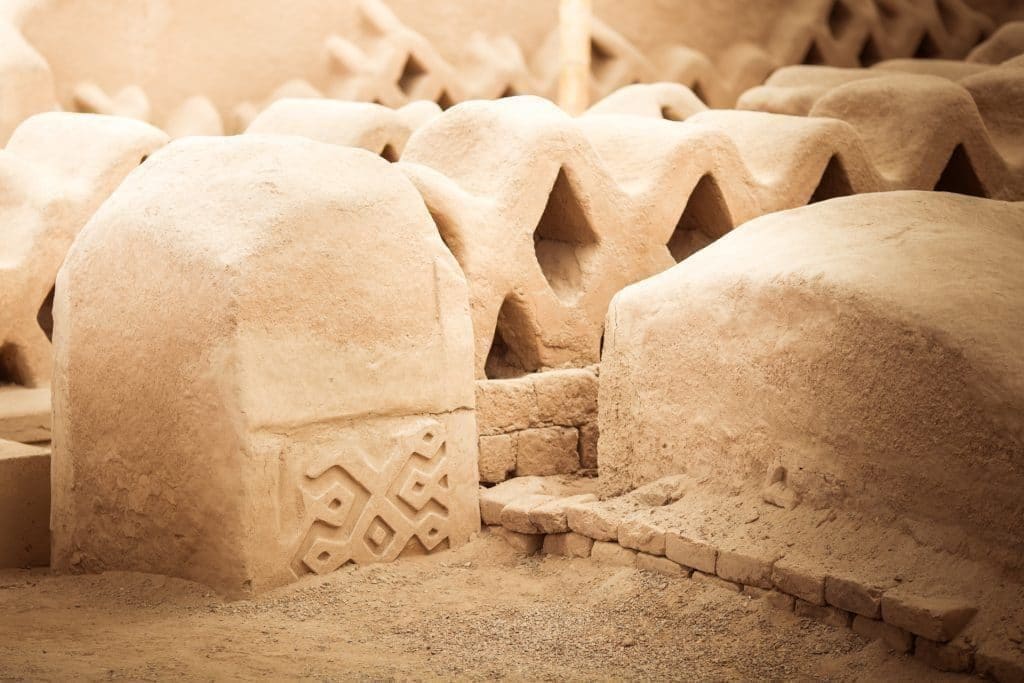 The temples of the sun and the moon

Built by the Moche civilization, these pyramids are decorated with very well preserved paintings. It was a religious and ceremonial center where human sacrifices were practiced. The Moche used to sacrifice prisoners during ceremonies and drink their blood!

Our complete article to discover the Temples of the Sun and the Moon. 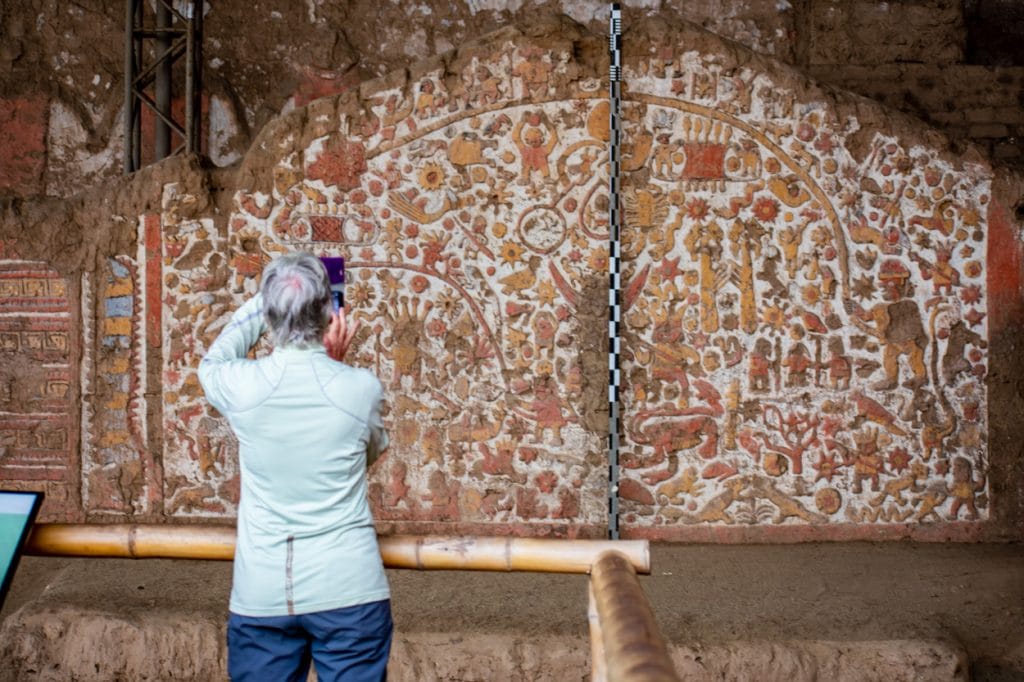 Temple Arco Iris, or Temple of the Dragon

To the north of the city is this administrative and ceremonial center. Built in adobe, this temple is decorated with frescoes that represent, among others, stylized men. The rainbow was venerated in certain friezes. In one of its walls, you can also see an animal that looks like a dragon with thousands of feet.

Special mention for the fishing village of Huanchaco: take the time to walk on the beach and watch the fishermen on their caballo de totora, the traditional reed boats inherited from Chimú. The water in Huanchaco is great and does not really invite you to swim. But maybe you like to surf? You can also enjoy a ceviche, typical dish of the Peruvian coast.

This archaeological complex of the Moche is located 45 km north of Trujillo. The three main monuments are Huaca Cortada, Huaca Prieta and Huaca Cao Viejo, where the Lady of Cao, the first known queen in Peru, was discovered. Have a look at the site museum allows you to learn more about the Moche culture, the site and the excavations.

Some festivities of the city

In Trujillo, there are many festivals and cultural events to enjoy. I will quote you three.

The contest of Peruvian Paso

Trujillo is considered the cradle of this horse specie. The association of breeders and owners of Peruvian Paso of La Libertad organizes competitions. One of the most famous and important takes place during the Spring Festival, in September and October: the National Contest de Paso.

The Peruvian government has declared this horse race “cultural patrimony of the nation.”

Our full article to discover a show of Caballo de Paso.

The Festival of Marinera

This typical dance festival is representative of the city. A competition is organized by Club Libertad and takes place the last week of January. The pairs of dancers from different parts of the country and the world are prepared each year for this contest. Peruvian Paso and typical riders roam the streets of the historic center for this occasion.

This is one of the most important festivals in Peru. It takes place at the beginning of October every year since 1950 thanks to the organization of the Lions Club of the region of La Libertad. More than a hundred activities are proposed to the many local, national and international tourists. Among them, we find the election of the Spring queen, a competition of horses, parades. Festivities reign over the city throughout the whole month. The Corso of Spring is a private party organized by the Lion’s Club and signs the end of this festival.

From Lima, it takes 1 hour by plane or 10 hours by bus to get to Trujillo.

From Ecuador you can also reach Trujillo by bus: