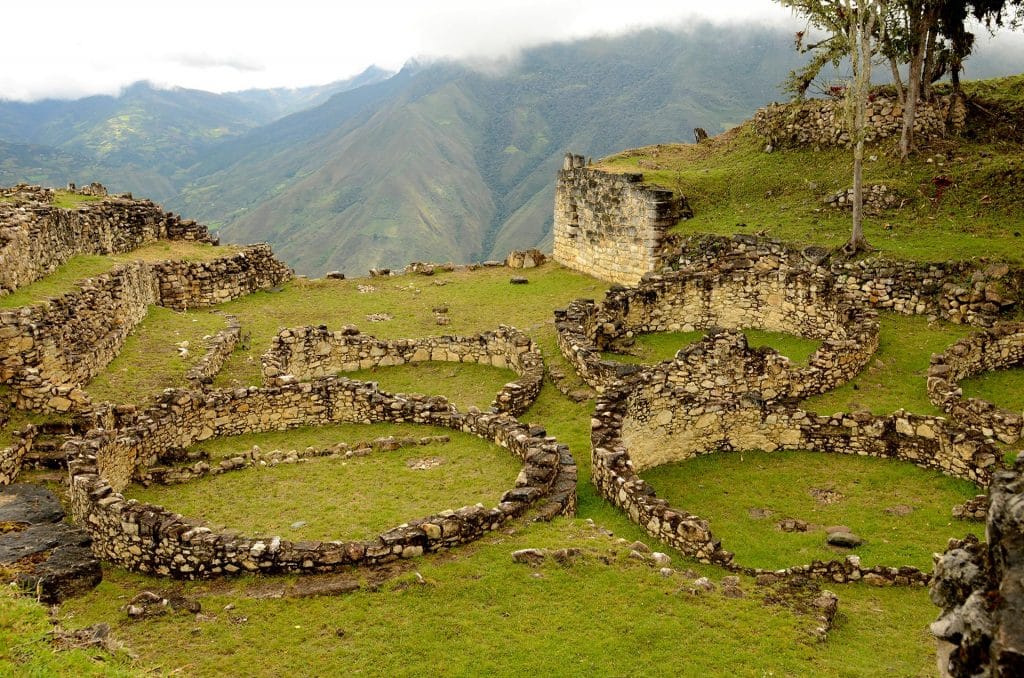 The fortress of Kuelap is situated in the Amazonas region in Northern Peru on a mountain top at 3 000 m altitude. This fortified city was built between 500 and 800 after JC by the Chachapoya civilization, that is also called the “Cloud Warriors”. Today Kuelap is often called the “Machu Picchu of the North”, according to their pre-inca historical importance. 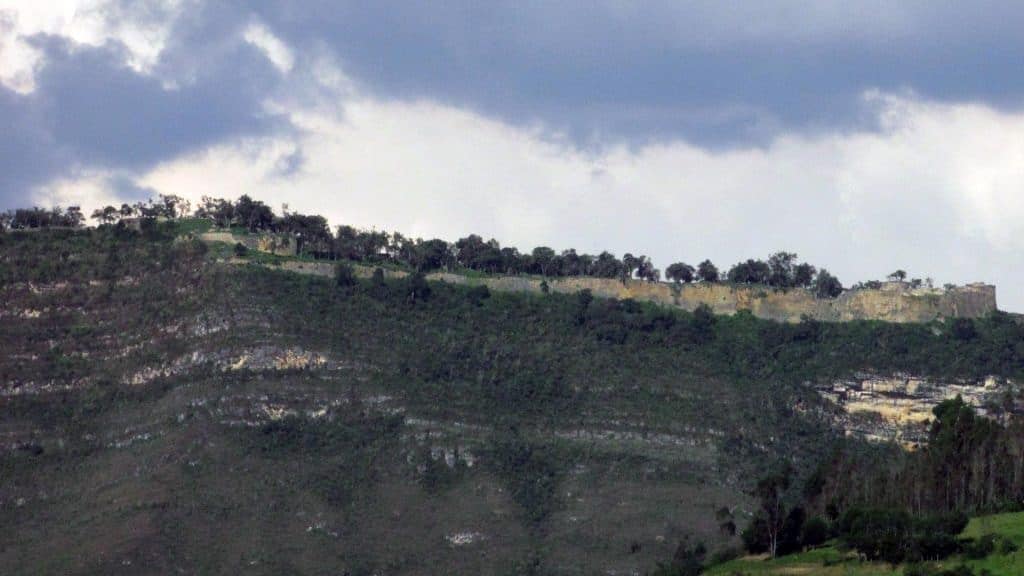 Plan on bringing warm clothes and be equipped for all kind of weather : rain coat, warm vest, a cap, dress in layers so that you can take off an put on clothes easily. Don’t forget sun screen and some water. Kuelap is situated at 3 000 m altitude, so the sun can be very strong.

On our trip to Kuelap, in the Amazonas Region in Northern Peru, once we arrived at La Malca, we paid our entrance tickets (15 soles per person), registered and went one last time to the bathroom (which were very clean by the way) and had a look at the orchidearium. Right here as well we met our guide of the day (in our case it was Abraham) who would guide us through the visit of Kuelap.

Going up to the fortress is an easy walk. The trail was paved in 2014 and every 500 m there is a shelter to have a little break, hide in case of rain or just enjoy the beautiful view. Abraham explains us on the way that Kuelap was rediscovered in 1843, but only in 1979 the Ministry of Culture started to take care of the fortress by installing guards at the entrance to protect the site.

How small we are !

We arrive at Kuelap from the Southern side where the wall is just impressing with ove 20 m of height. We know today that these walls were not constructed at this height right away, but a continuous superimposition of “live layers” makes its current height. Like many pre-inca cultures (see as well the Moches on the Northern coast, close to Trujillo with the Sun and Moon Temples), the Chachapoya civilisation buried the house up to a certain height at the death of the family Chief and then reconstructed again above that. 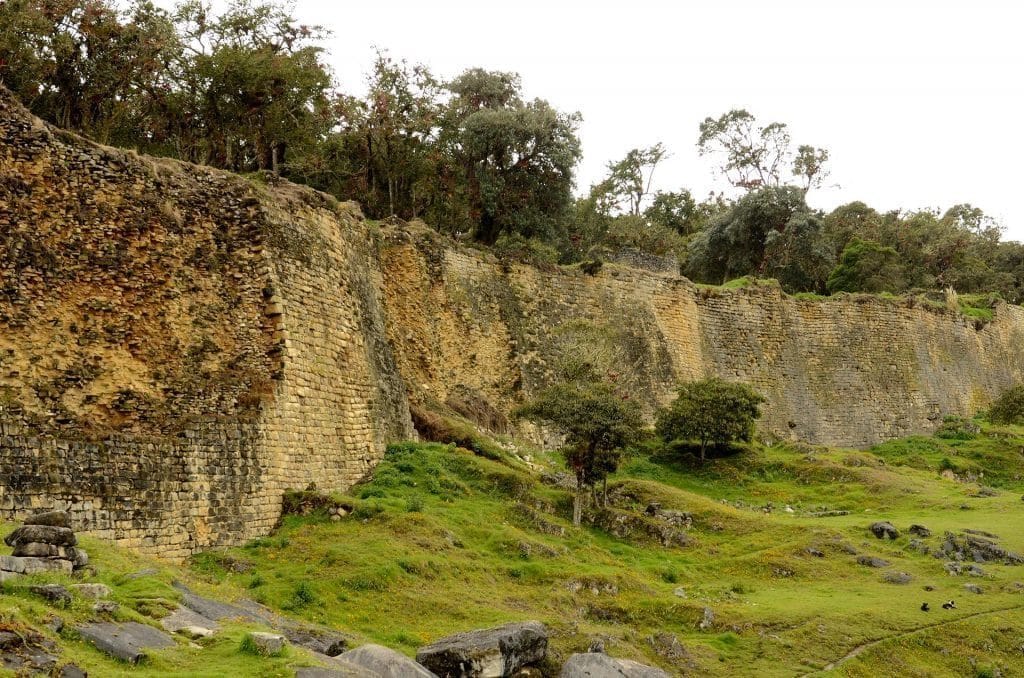 The governments of different countries, such as China and Japan helped to realise research on Kuelap, but up to today, only 20% of the area have been investigated.

The entrance of the site 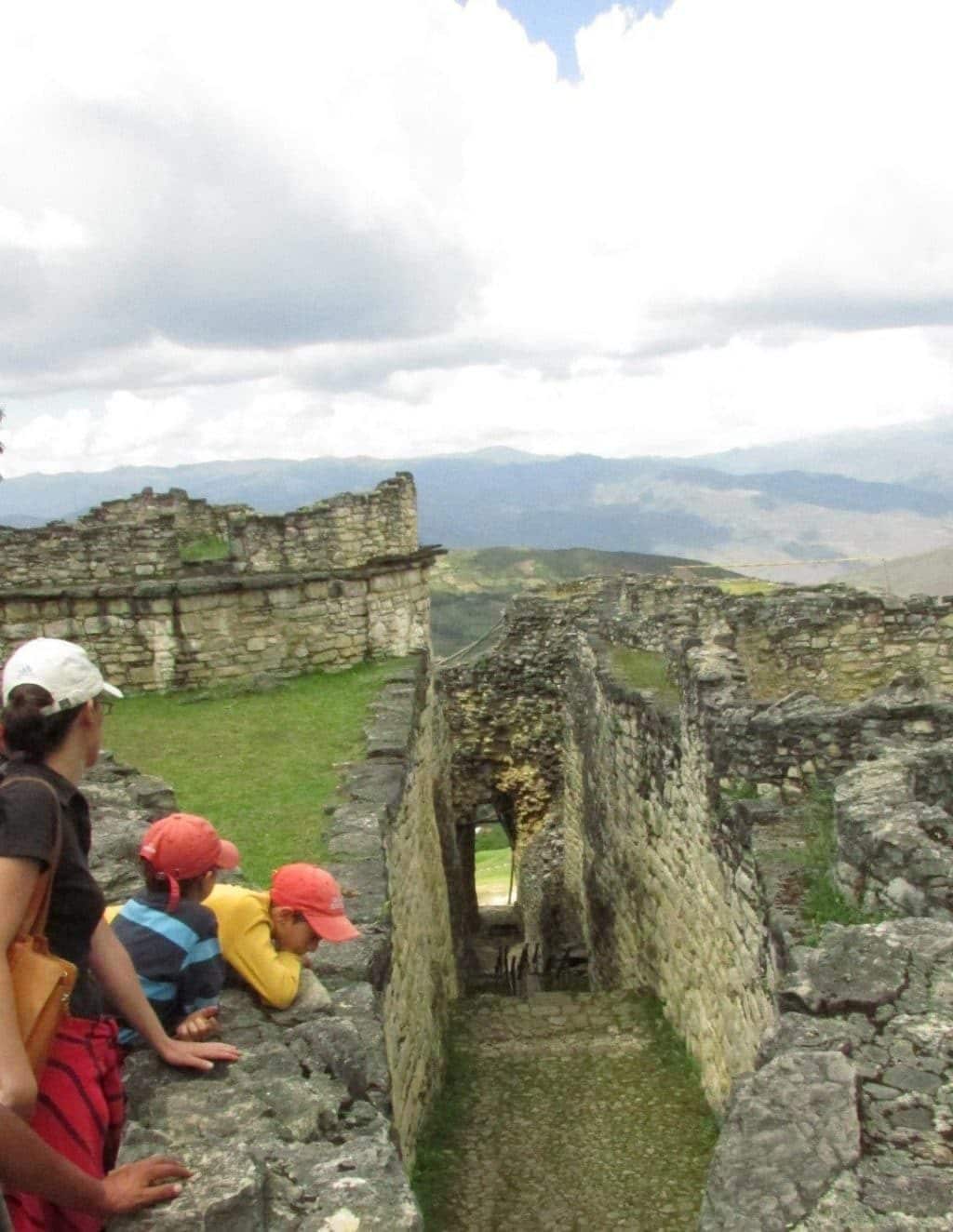 The site entrance today is what is called the entrance number 3, which was at that time the delivery entrance for
water and food
.  By climbing up, we can even see the traces of the hoofs of lamas that got “printed” in the stones. The spectacular entrance number one that you can see on all the official pictures is currently closed to the public for security reasons. It is held by stacks because of the risk of collapse. It definitely is time to protect the site as it deserves it.

The first level and the round houses

Once we are inside the fortress, we are on the first level, where the people lived. Here you will find most of the round houses that are so typical for the Chachapoya culture. Only one was reconstructed with a thatched roof so that we can better imagine the village at ancien times. The Peruvian government doesn’t want to reconstruct the historical monuments, only keep them in a sufficient good shape so that people can visit them. We don’t know enough about the way the houses were constructed and a reconstruction could easily falsify history ! On the first level there are 420 houses, but according to recent investigation, the archaeologists believe that there were more houses that collapsed and that they only start to find traces now. In each house lived a family, about 8 people. Traces of big milling stones, sometimes a fire place (although it is believed that the cooking was done in an adjacent area) and also 2 to 3 graves were found in each house. 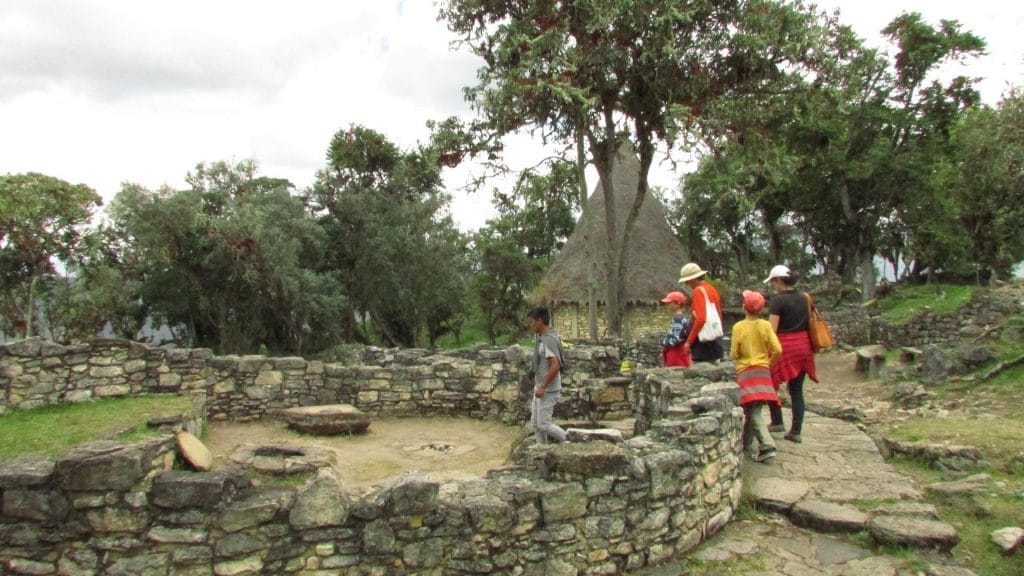 As indicated above, the Chachapoya buried their dead within their house, covered the ground and constructed again on top. The graves were just round holes of about 50 cm in diameter and about 1 m deep with a flat stone on top. The funeral ritual consists in taking out the viscera of the body and put the body in fetal position before holding it together with strings and putting it in a jute bag on which the Chachapoya drew a face. In the grave you would also find ceramics, but no gold or silver like in the Inca tombs. (Just to remind you that the Chachapoya culture lasted from 400 to 1500 after JC and is much older than the Inca one.) The Chachapoya believed in reincarnation. This is why it was certainly very logical to bury someone in a fetal position in the ground (Mother Earth) awaiting that he will be reborn again.

The houses of the most important people were decorated with diamond-shaped or zig-zag designs that represented the divinities of the Chachapoyas: felin, snake or condor. 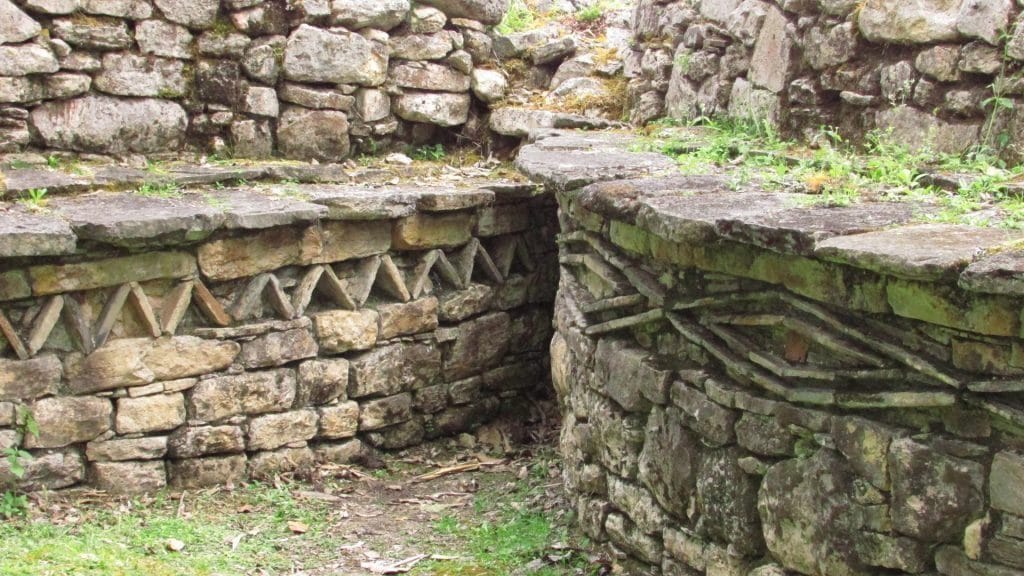 This part of the citadel is not cleaned yet and still invaded by vegetation, tress with bromeliads and wild orchids. The ambiance is just mystical. From one second to the other the weather can change. Between sun and hot, clouds above and below us (keep in mind we are at 3 000 m altitude!), light rain and wind, on this day, we had everything !

We continue on the second level, where only the most honorable people of the citadel lived. We can not visit the Southern part on this level, as archaeologists have found an inca tomb there and now it is closed to the public. But we can observe a rectangular ruin that is as well from the Inca occupation period. Remember that the Chachapoya would construct their houses in a round shape. On this level there are 4 Inca ruins and a Chachapoya tower on the North end, the highest place on the fortress, but that you cannot visit.

Back on the first level we continue walking towards the South, by passing the famous entrance number one. On this part of the fortress the ruins have been cleaned and restaured where it was necessary to keep them in shape and not to fade away. A ruin of a round house still shows its 4 meter high walls and openings that could be described as windows.

We arrive on the Southern end on the first level and find what is called the “Tintero”, a monument that looks like an inverted cylinder and in which the remains of bones have been found. Supposedly it was a highly religious place that was used for human sacrifices. The most surprising fact is that even bones from BEFORE Jesus Christ were found which would indicate that the place was inhabited much longer than initially thought. 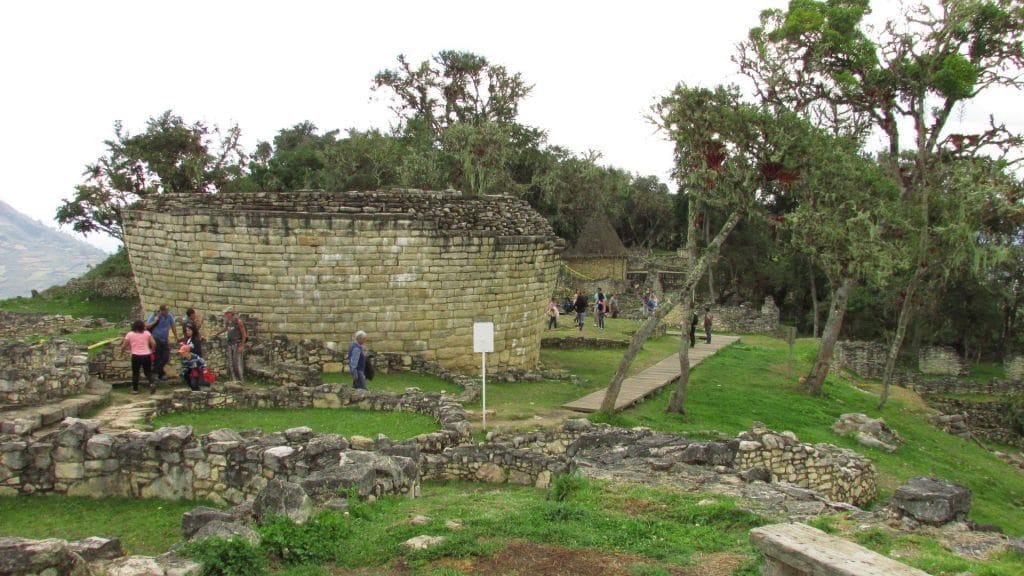 On an outside wall of the Tintero you can see a face that seems to smile, but our guide explains us that it is a felin, one of the gods of the Chachapoya. There are another 14 faces in the hallway of entrance number one, showing felins and snakes, but there is no access to the public.

There we go, we finished our tour and go back to entrance number 3. Entrance number 2 is not really an entrance, but more like an exit that goes to an outside cimetery of the citadel. It’s through this entrance that the Chachapoya left Kuelap under the Inca occupation.

We walk back to La Malca and are completely charmed. Unbelievable that this fortress exists and that we only know so little about it. So many questions stayed with answers – but isn’t it this that keeps alive the myth ?

For more articles to consult :