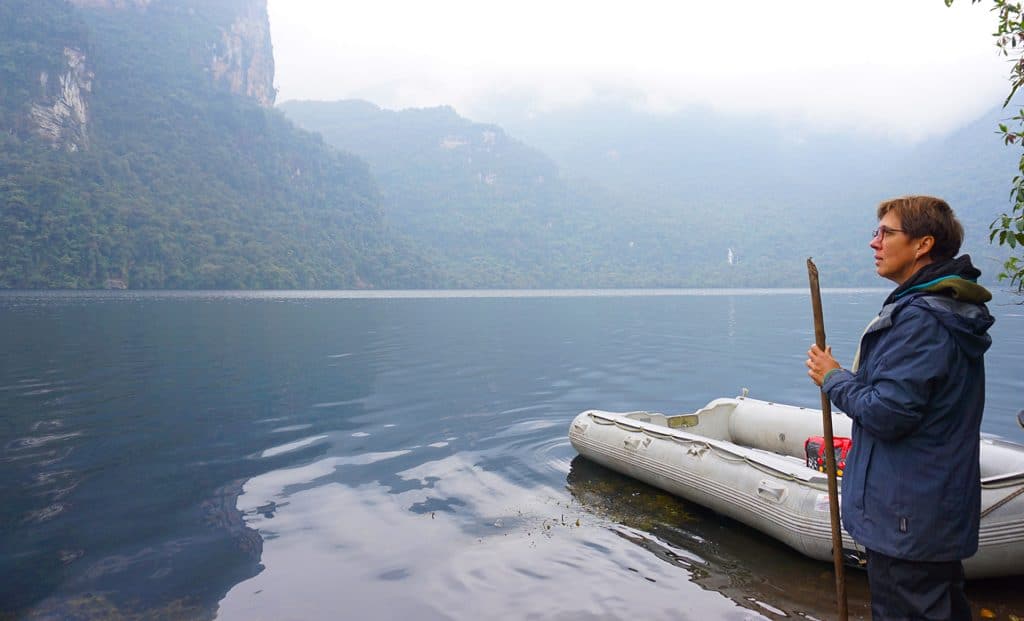 Lake of the Condors, the greatest trek in Amazonas Region, Northern Peru

Do you know the Lake of the Condors? Not yet? It is a great paradise to explore beautiful remote and mythical landscapes. An ideal destination for nature lovers, history and outdoor adventure.

Why should you go to the Lake of the Condors? If you are thinking of visiting Peru, I recommend you to visit the north. It is a new tourist destination, a new option, I promise you that you will love it. As well as the Condors’ Lake there are many more places to explore.

I have many things to tell you about this beautiful and interesting place. But first I want to introduce the group that we conformed for the expedition and visit to the Lake of the Condors. There are three tourists from Germany, two local guides from the town of Leymebamba in Amazonas region (Lenis Valqui and Santos Días) great guides and chefs, and me.

When you go to the Lake of the Condors, you leave for 3 days minimum. You can stay longer and discover even more. We are on the 3 days-trek. I will go explaining day by day and by adding historical information about the place.

I remember that we all woke up very early to get ready with the things we had to take. We had slept in the house of one of the villagers with whom we are working on the “homestay” project in Leymebamba town. 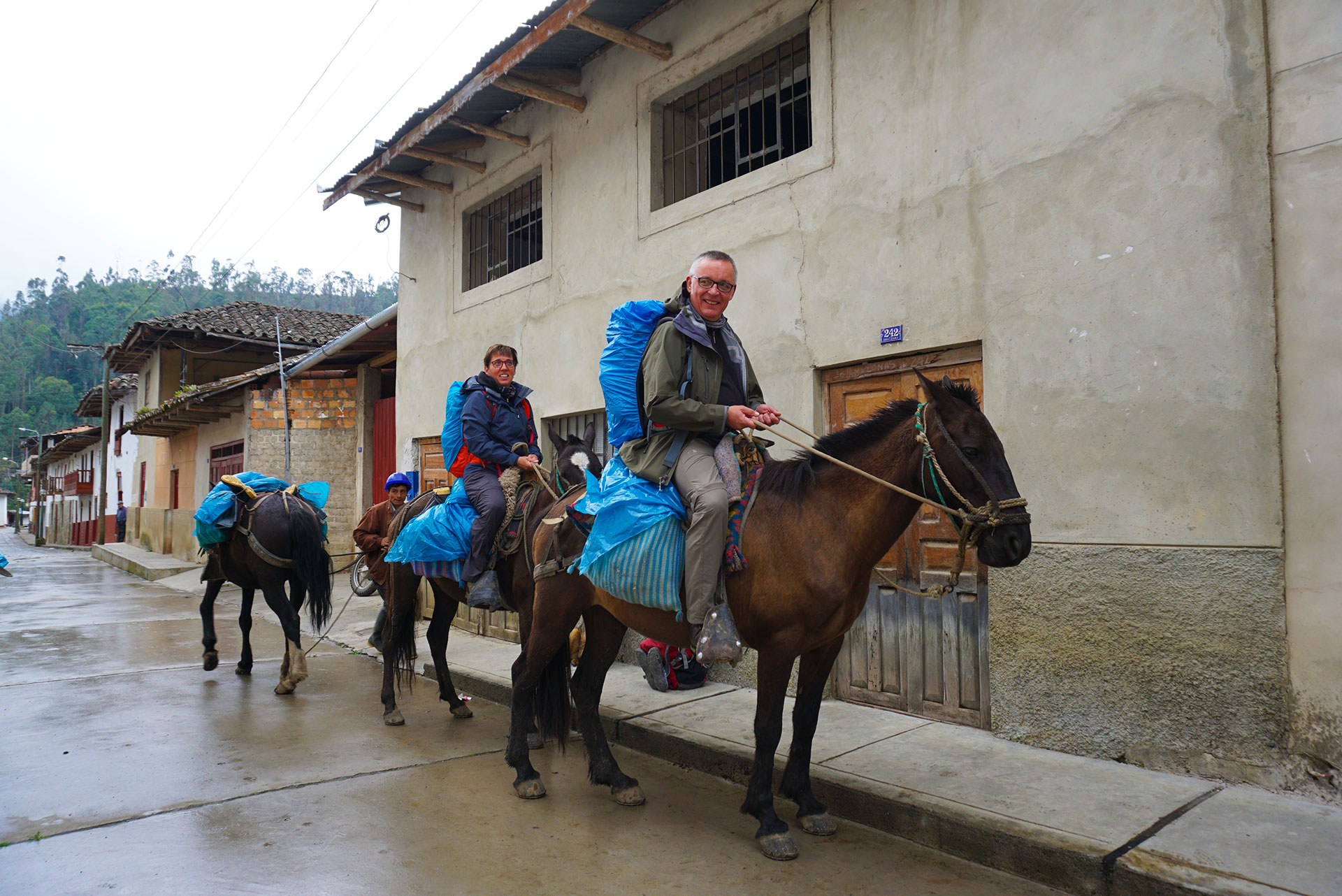 The road was getting harder, it was raining and it was very cold. The first 10 km we went on horseback and then we had to walk because the road was slippery and dangerous. At noon we made a stop to eat and recover energy, we ate fruits, chocolate and 2 sandwiches that the guides had given us.

We were still more than 20 km away, we were all wet and very cold. We crossed beautiful forests and landscapes at 3 000 meters above sea level, but we could not see much because of the fog that covered all the way. If we had gone without a guide we would have been lost, the fog and rain was a problem to find the way. It is advisable to always go with a local guide.

We were all tired, wet and cold, and at every moment we asked: How long is it to get there? We are already close? After 20 minutes we heard one of the guides say we arrived! Our face reflected joy and relief because at last we had arrived.

The night was cold. We only wanted to be near the fire and have something hot. The guides prepared the dinner for everybody. It was a delicious omelet with noodles and tea. The cabin where we stayed, had six rooms and each had four beds where visitors usually stay.

After breakfast we started the visit to the Condors’ Lake and the mausoleums that were around the lagoon. We left at 8 in the morning and returned almost at 5 in the afternoon.

Just 10 minutes from the cabin, you get to the Condors’ Lake overlook at almost 2 900 meters above sea level. But, to reach the lake, we still had to walk down for more than 15 minutes. This lake is surrounded by beautiful landscapes, still virgin forests with a rich diversity of flora and fauna.

The adventure had already begun, but there was still much more … we crossed the lagoon paddling in a boat, the scenery was incredible and magical. The Condors’ Lake is 3.5 km long and between 100 and 80 m of depth. Among the cliffs there were some evidences of tombs that could only be seen at a distance.

To get to the mausoleum, you must work for it

We paddled around 20 to 30 minutes to cross to the other end of the lake, where we ascend to the mausoleums. We climbed more than 100 meters through the forest, there were times that we needed ropes to be able to climb. After 50 minutes we arrived at the mausoleums, tired but happy with this new experience.

From the mausoleums we could see the whole valley and the majestic Condors’ Lake, we all enjoyed the place, we took pictures and one of the visitors from Germany asked some questions:

Why do we call this place The lake of the Condors?

According to historical data, the first one to use the name of “The Lake of the Condors” was the explorer Gene Savoy in the year 1970. He and a team of divers explored the lagoon in search of possible submerged offerings. There are no condors in the place. But, at the request of the authorities, they changed the name to “Mummies’ Lake” in 1997. Currently, locals and tourists use the name “The Lake of the Condors”.

Who built the mausoleums?

The Condors’ Lake was part of the Chilchos territory, a group of ayllus “people”. They formed part of the Chachapoyas culture (800 AD to 1470 AD). To the north side of the lagoon there is an archaeological site known as Llaptacocha “village in the lake”. The archaeological excavations determined that it was a residential area occupied by this group of ayllus “people”. It could have been built in 1200 AD. Contemporary with the mausoleums. The exploration in the Condors’ Lake showed that there were other intact funerary sites and residential settlements. In addition, there are two nearby lakes: Quintecocha and El Plomo, with abundant vestiges of burials and houses, but to visit they take much longer. 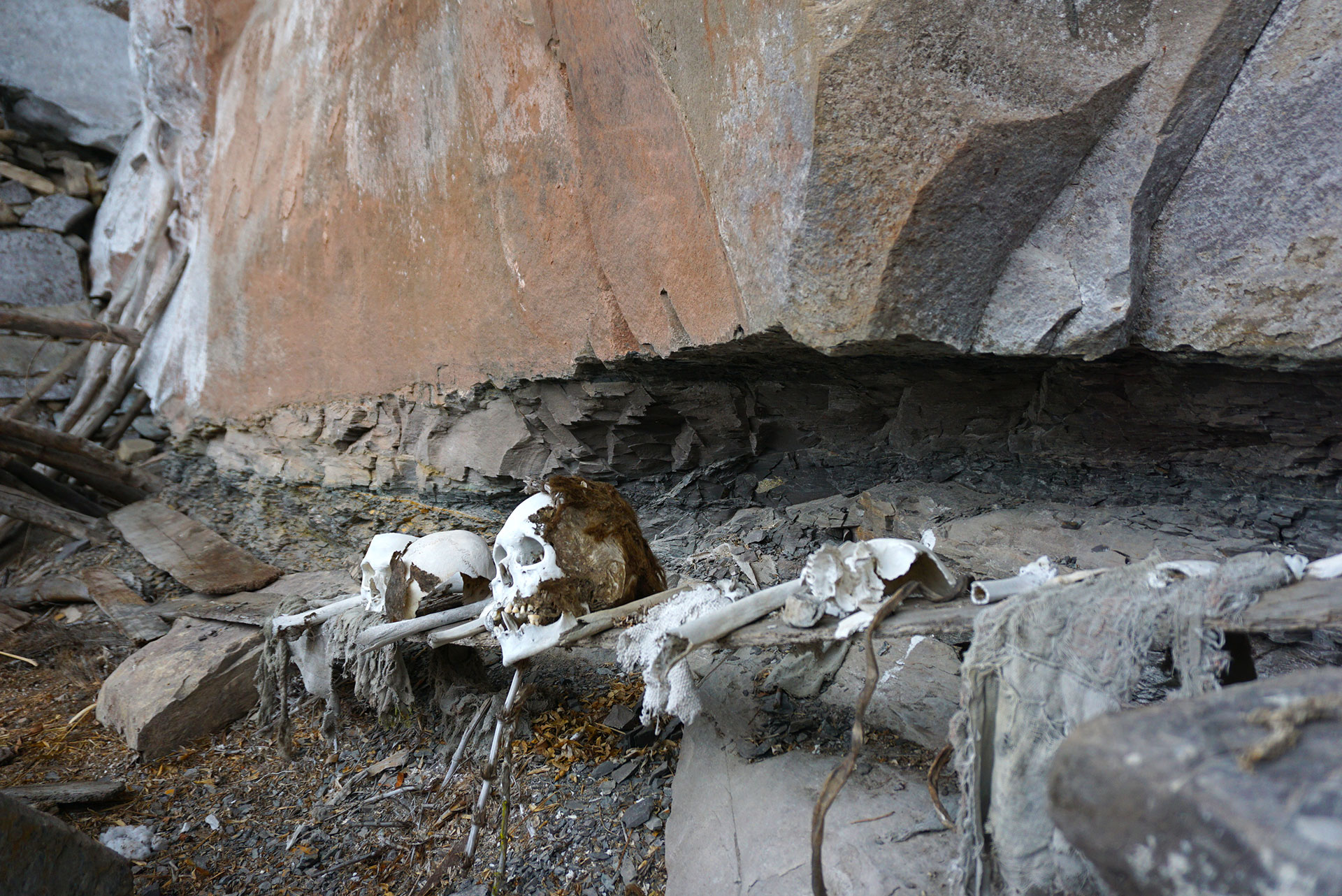 How was this place discovered?

A group of workers found the mausoleums of the Lake of the Condors in November 1996. The same group of people desecrated the mausoleums, opened burial bales with machetes in search of supposed treasures.

The authorities of the Leymebamba town were aware of the illegal activities of this group of workers recovering many things stolen. It was possible to recover textiles, ceramics, mattes, glasses and wooden plates, and funerary bales.

In the year 1997, the Bioanthropology Foundation Peru Mallqui Center developed a project to study the place. But, due to many factors the archaeological objects had to move to Leymebamba town. 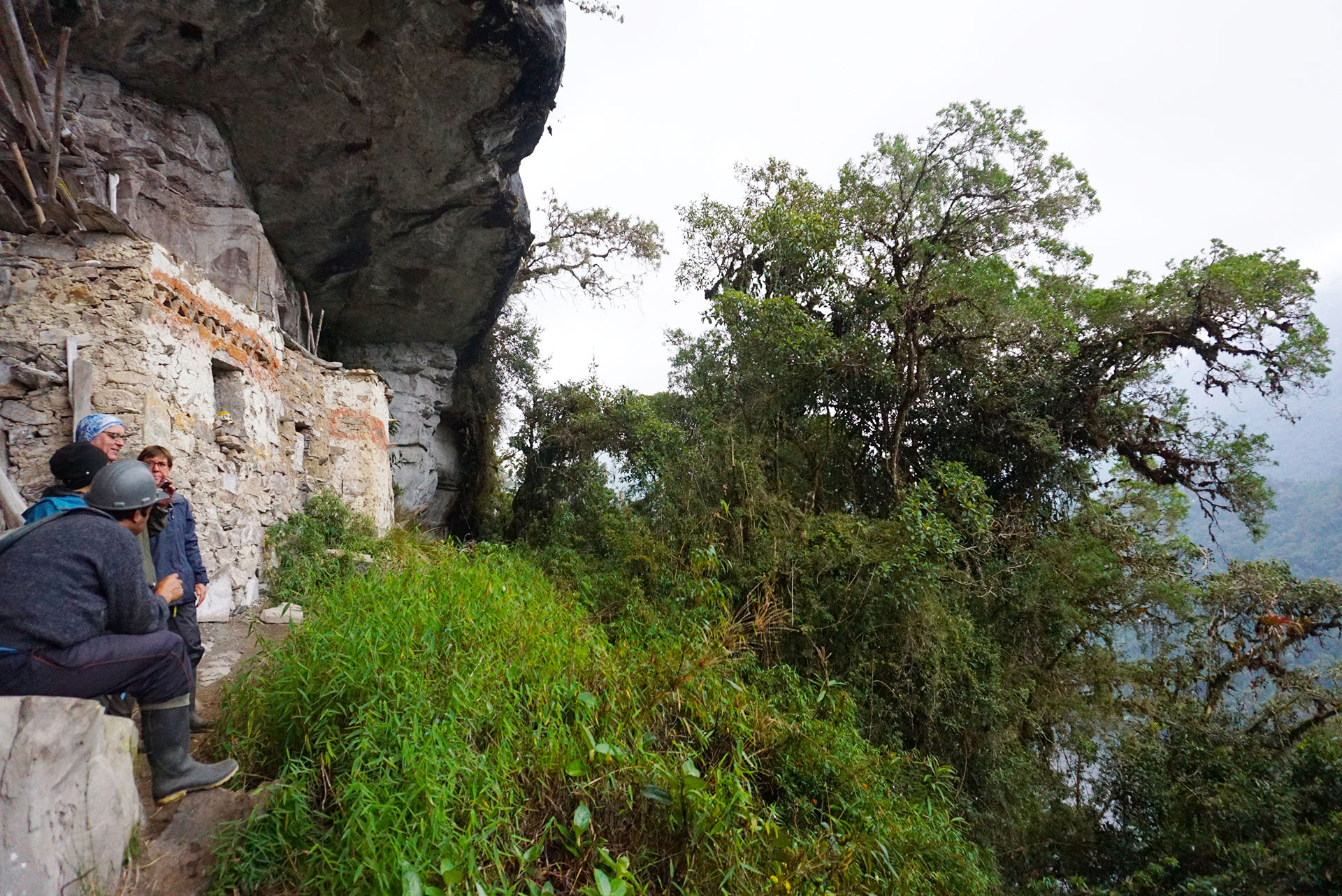 What did the scientists find in the Mausoleums?

The materials recovered in the Condors’ Lake included more than 2 300 archaeological objects, among which 219 mummies stand out.

According to the recovered evidence, they indicate three different stages or periods:

The Incas conquered the Chachapoyas, who reused the mausoleums to place their dead. 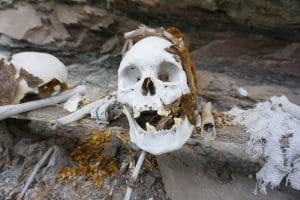 Mummies! Studies indicate that the Chachapoyas did not embalm their dead. Evidence suggests that the Incas were the ones who introduced the techniques of evisceration and embalming.

The conservation of human remains in the Condors’ Lake is extraordinary, despite the wet and rainy weather. The mausoleums have a dry and cold micro climate, which contributes to the conservation of organic remains. 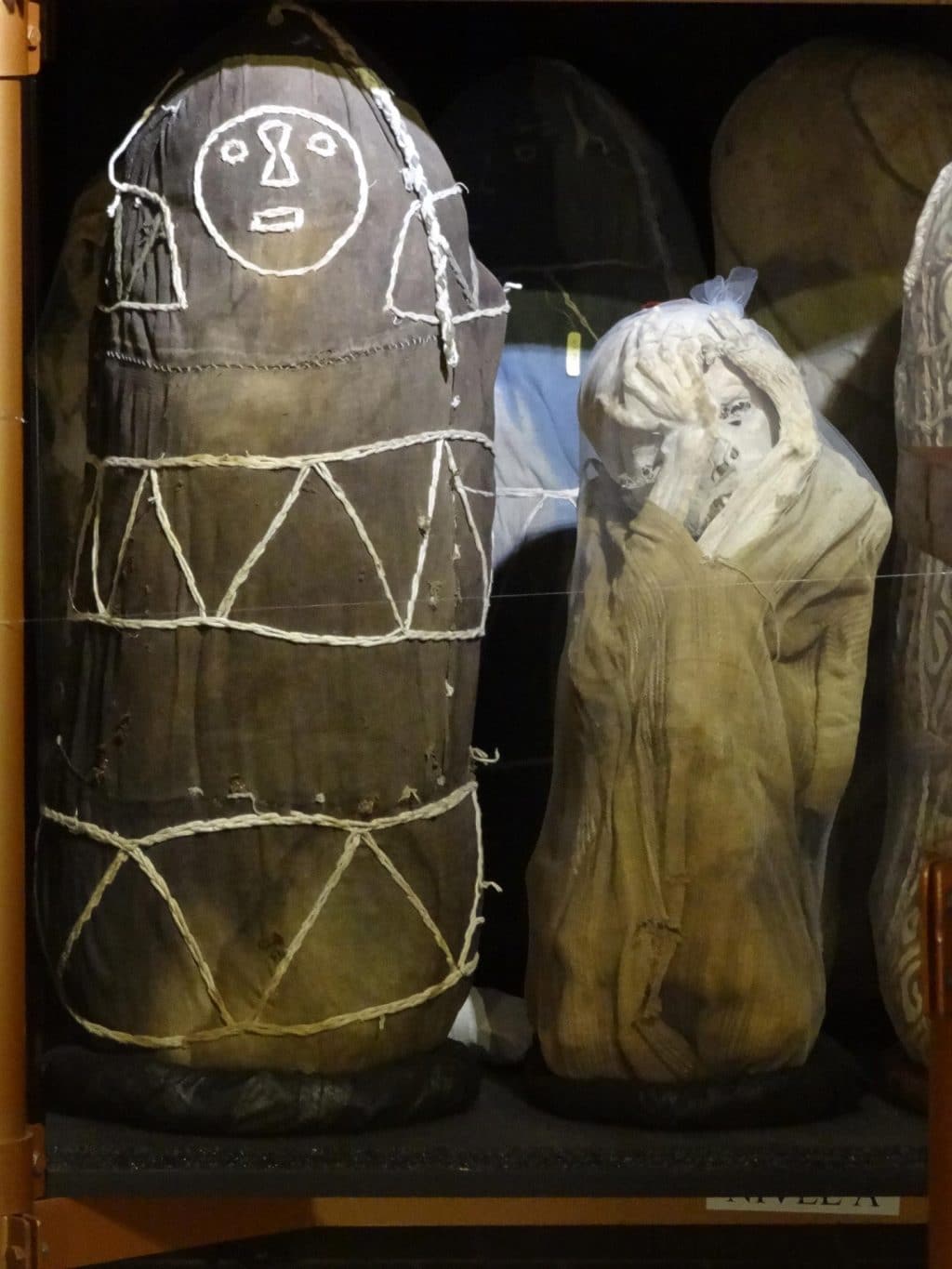 And the adventure goes on…

It was time to return to the boat, the day was cloudy and humid. On the shore of the lagoon Mr. Lenis and Santos, our guides prepared salad with tuna, it was delicious. After lunch we went for a boat trip accross the lake. We had a lot of fun because we tried to fish.

One of our guides told us if we do not fish today, we do not have dinner! I rowed and the others fished. Well, I’m not very good at rowing, I almost made the boat hit a tree. Ah! You wonder if we fish? I only tell you that we had delicious fried trout. The day was over, we were all tired and needed to rest. It was a great day, it did not rain, but it was cloudy. Well, now we’re all going to sleep, until tomorrow…

Last day: time to hike back

The horses are ready, we already had breakfast, all our things are ready, it’s time to leave. The head filled with souvenirs, each minute that passes takes us away from this so beautiful and interesting place.

We left at 7 in the morning, happily it did not rain that day, but still the road was hard. The first 5 or 6 km we went on horseback and then we had to walk for more than two hours. From the viewpoint we could see the whole valley of the lake, it was so beautiful and spectacular.

Mountains and rock forests were our farewell scene. Beautiful landscapes covered by the fog were revealed during our journey. We made a stop for lunch, the last we would have together. We all say it was a great experience, but it was difficult too. The return was faster than we thought, we arrived around 3 pm in the afternoon. We were tired, but we went to visit the museum. That’s where you can see all the objects recovered from the lake. If you want to know more about the Leymebamba Museum.

Trek at Lake of the Condors, a great time

It was a great experience for everyone, it was not easy: the walk is tough, you can go horseback riding, but it’s still difficult. If you are a lover of outdoor adventure, and want to have new experiences, this place is ideal for you.

How to get there?

If you plan to visit to the Condors’ Lake, you should know that the road is rugged and requires a big physical effort and take into consideration the following things: