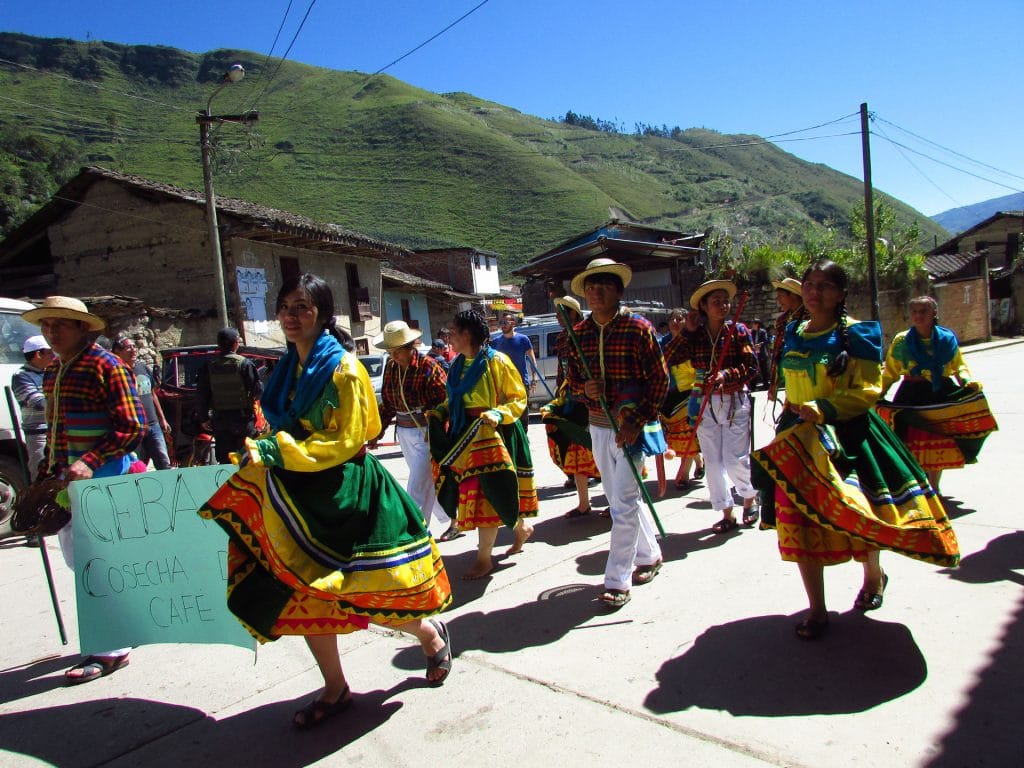 Everything you need to know about Leymebamba

Leymebamba is at an altitude of 2,200 meters. Here is where the Utcubamba river, which is strong and dangerous in Chachapoyas, finds its source. The whole valley that leads to it is peaceful, green and surrounded by vertiginous mountains. 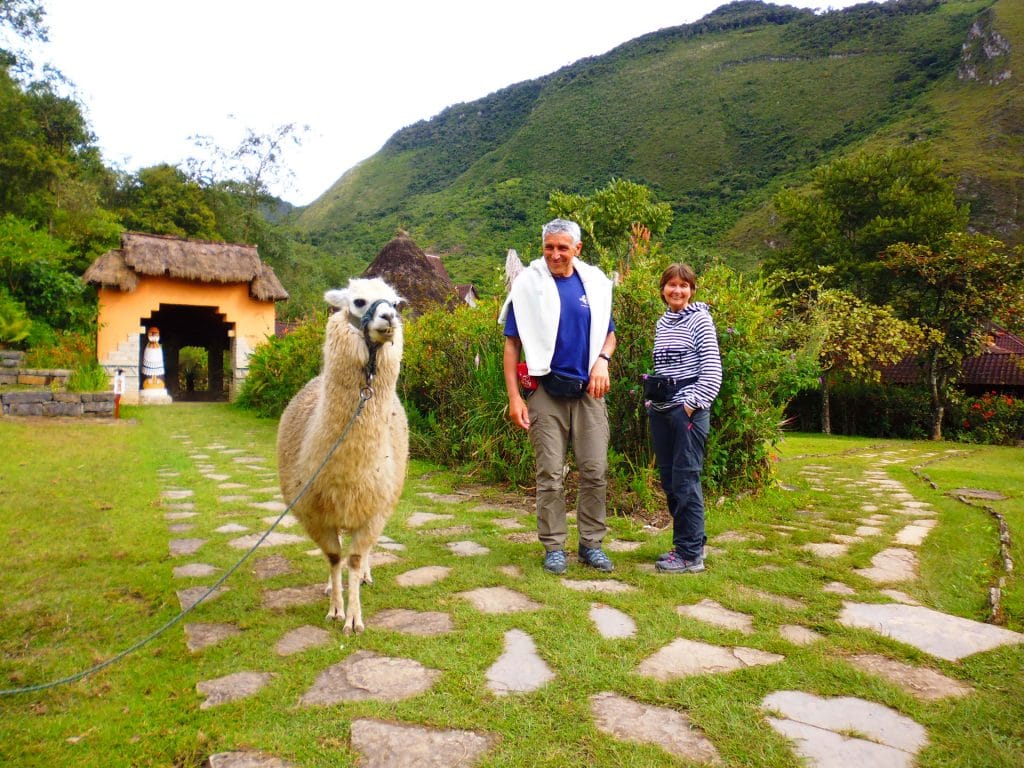 Development of tourism in Leymebamba

Leymebamba is an agricultural town at the end of the Utcubamba Valley. Until 1997, the only source of income for its inhabitants was the agriculture. But the discovery of a mausoleum on the cliff of the mountain, in front of the Laguna de los Cóndores, a 10-hour walk from Leymebamba, has changed its destiny.

The locals helped the archaeologists to remove more than 200 mummies, and they learned a lot about their own Chachapoya culture and the influences of the Inca culture. For many of them, this discovery was a revelation.

What to do in Leymebamba?

The main square of Leymebamba invites to walk, sit and admire the church of large stones. See the combis that connect Leymebamba with Chachapoyas, drink coffee or talk to the locals.

Take a look at the craft shops in the square and do not miss lunch at one of their restaurants.

While visiting the Leymebamba Museum, you will see objects of wood, ceramics and cloth that were found in the Mausoleum of the Laguna de los Cóndores. Among them are cups, wall decorations, vases and musical instruments.

Miguel was part of the local team of excavations at the archaeological site. Then he began to study the drawings and objects in detail. He made a wooden replica but was not very happy with the result. However, after the opening of the museum, the demand for souvenirs was felt … and Miguel’s replica was selling! Then, he made a new one, then another, and the demand was still strong. The Leymebamba museum asked him to make replicas for the exhibition and they hired his help.

Today, it sells decorative or useful objects, such as a coat rack, a bedside lamp inspired by the Chachapoya culture style, keyrings, replicas of Kuélap, the fortress of Chachapoyas. He works on request and even sends to Lima. 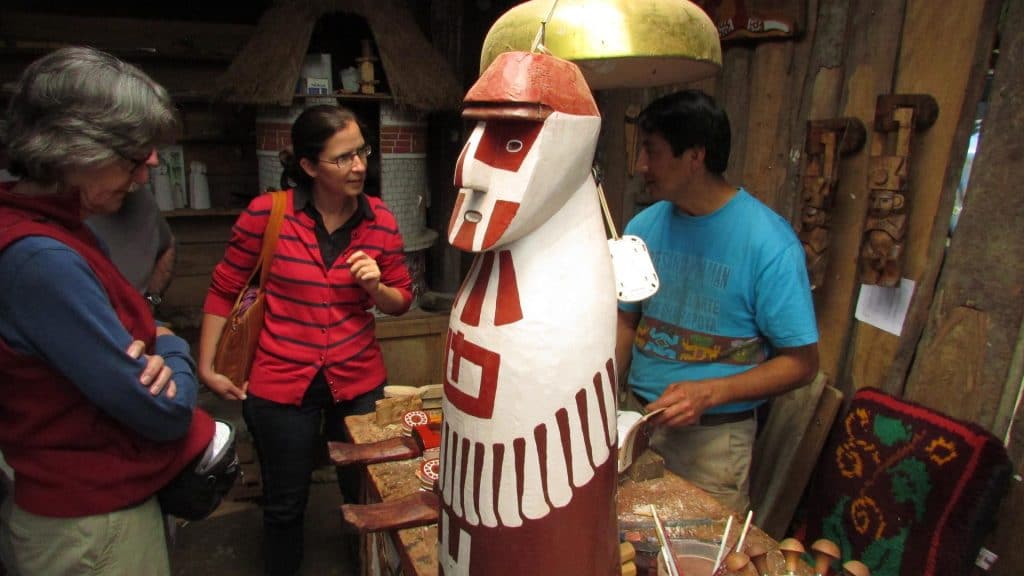 Discover the association of women weavers of Leymebamba

Other people were also inspired by the discovery of the archaeological site of the Laguna de los Cóndores: the women of Leymebamba, this time with the tissues.

In fact, always in the villages of the Amazon region in the Andes of northern Peru, women weave and weave at the same time as they take care of domestic tasks. It’s almost their second nature!

It turns out that one of the women had the patience to study the tissues found thoroughly. She counted the threads. And he updated the manufacturing process of Chachapoyas fabric with its colors (brown, red, black and yellow) and geometric patterns. The association of women weavers was born. Today there are many women in the village involved and produce fabrics of different widths to make belts, bags, tablecloths and even larger items, such as bedspreads or tablecloths. Meanwhile, they have diversified the colors and you can find fabrics in green and blue tones.

It is possible to see them at their place of work, on the way to the Leymebamba museum. There, they explain the manufacturing process of fabrics. The latter is not done at all with a large loom. They use wooden sticks to keep the threads in order. 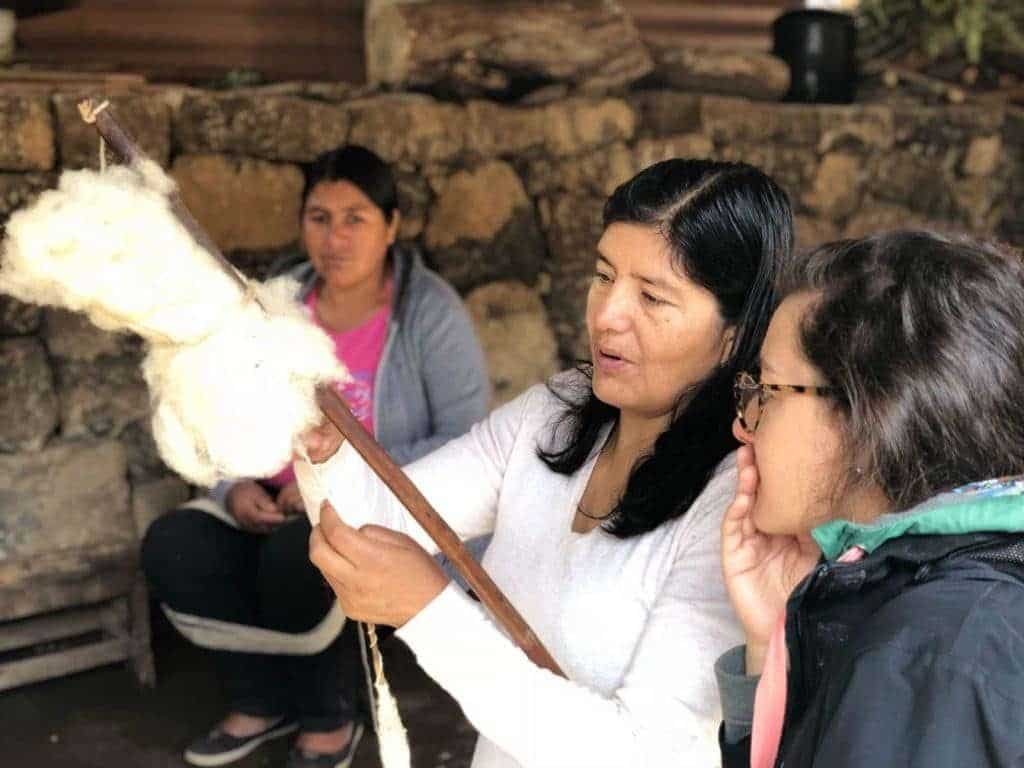 The Leymebamba museum is a little further south of the village. It is 10 minutes by car and 45 minutes on foot from the square. The town of Leymebamba is the owner of the museum and was constituted in the Civil Association. The Mallqui Administrative Center provides administrative and professional work.

The place is very well arranged: orchids, sculptures, house with thatched roof. This is where you can admire the archaeological discoveries of the Laguna de Cóndores, which includes 219 mummies and a unique display of Quipus.

Most of the pieces exhibited in the museum cover the Chachapoya period, as well as the era of Inca rule in the region. There is also a room devoted to traditional continuity in the region and the dangers of deforestation in the way of life of indigenous populations. 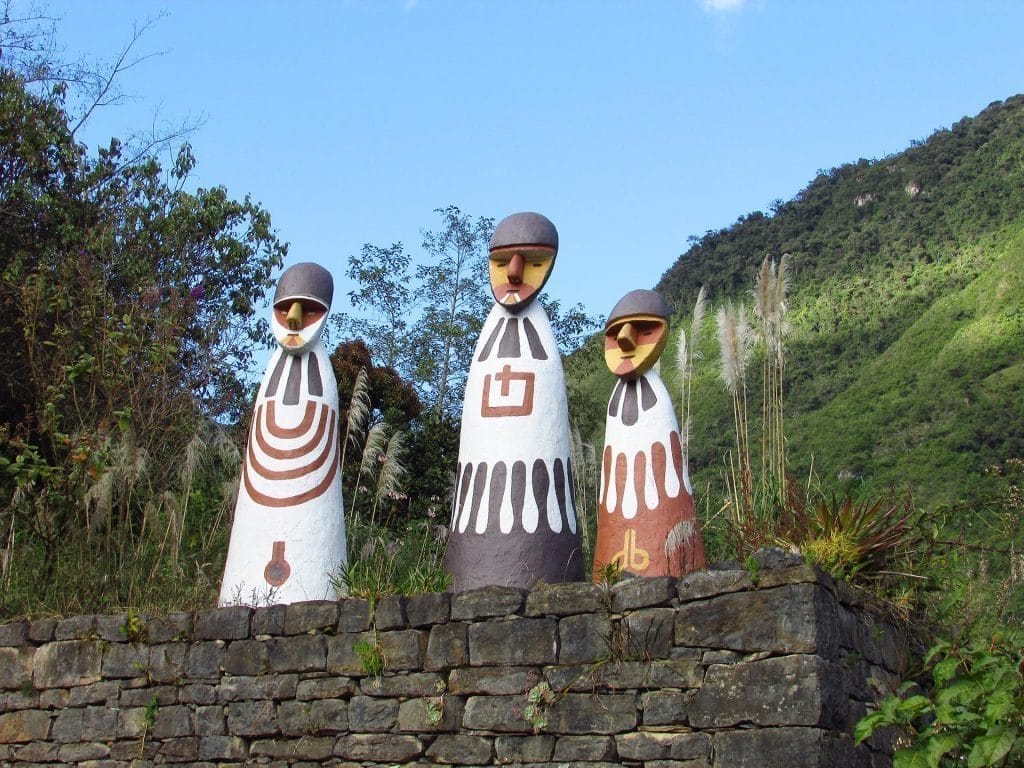 An unexpected discovery in the origin of the museum

Leymebamba is the closest town to the Laguna de los Cóndores, where the farmers have come across a real archaeological treasure. When working the land, the inhabitants discovered, in 1997, this important necropolis. Unfortunately, these remains of the Chachapoya civilization quickly fall into the hands of grave robbers. However, they renounce the site, disappointed that they did not find precious metals. Archaeologists Sonia Guillen and Adriana von Hagen arrive a few days later to the scene, in time to save the necropolis.

The Leymebamba museum is built quickly, with the urgency of having a suitable place to store this treasure. This work was done by the Mallqui Center. It was supported by the international community, including Austria, Finland, Italy and the United States. The main assistants also came from the Institute of Bioarchaeology, the Von Hagen Family and the Discovery Channel. Thanks to the collaboration between local and international communities and archeology teams, many objects were exhumed and the museum was created.

This is built respecting the techniques of local constructions. Its architecture is reminiscent of the typical round houses of the Chachapoya culture. The garden will be a delight for nature lovers: depending on the season, we can admire many species of orchids.

The opening of the museum took place in June 2000 in the presence of the Austrian Minister of Education, Dr. Elisabeth Gehrer.

The excavations carried out at the site of the Laguna de los Condores allowed to unearth an impressive collection of funerary and everyday objects. The majority corresponds to the Chachapoya period, from the 11th to the 15th century. A part also dates from the Inca-Chachapoya period that begins with the capture of Kuelap around 1470.

In particular, they find Quipus, a complex knot system. They look like big necklaces, but actually they allow to count. They belong to the period of Inca domination, a civilization that ignored writing!

Many ceramics from different cultures are also exposed. This shows, in addition to the Inca influence during their invasion of the region, the “commercial” exchanges between the Chachapoyas and other inhabitants, especially from the North of Peru.

In the five rooms of the museum there are also explanations of the main archaeological sites of the region, such as the Karajia sarcophagi. They reproduce as models and life-size at the entrance of the museum. 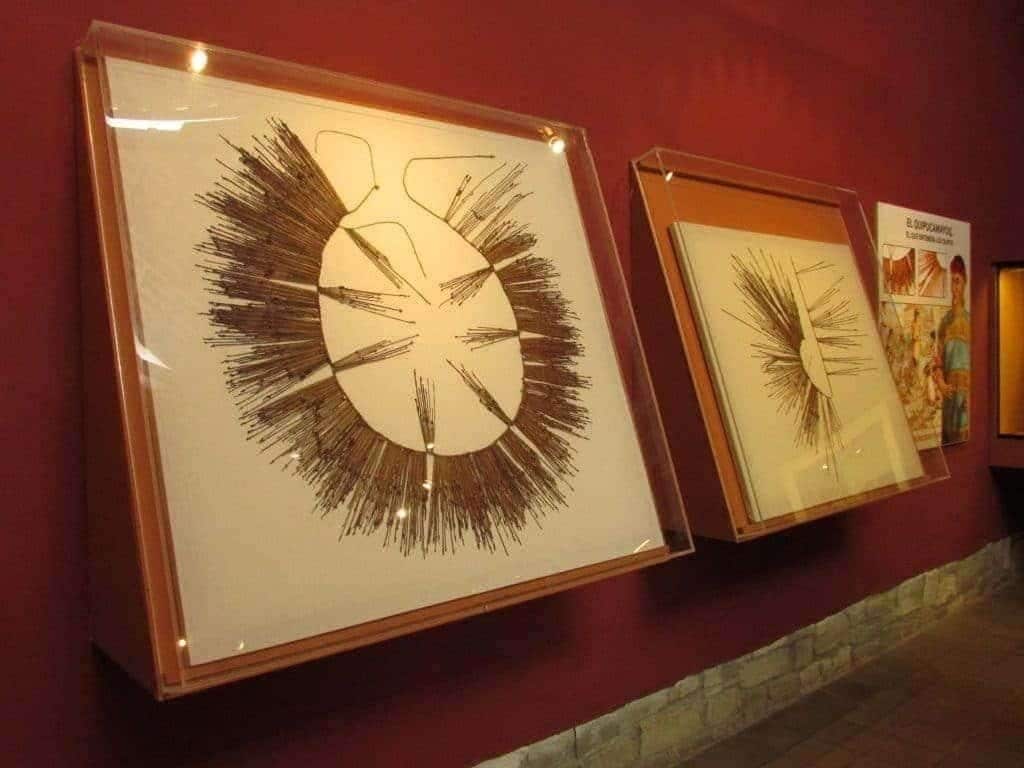 The treasure of the museum: the mummies

The most impressive part of the museum is the “collection” of more than 200 mummies in excellent condition. To ensure their conservation, they are exposed in a dark room. The temperature and humidity correspond to those of the mausoleum where they were deposited almost six centuries ago.

When we think about mummies, we often think of Egypt. But the Chachapoya also have a way to keep their dead. The technique has also evolved. If at first the body was allowed to decompose before making a “bunch of bones” that were wrapped in cotton, then the Inca influence is felt. The body is first emptied of its organs to avoid decomposition. Then we close the holes with cotton. After a period of “drying”, the body is placed in a fetal position. Finally it is wrapped with linen before placing everything in a cotton shroud decorated with different patterns.

This technique has allowed the mummies to defy the centuries and reach us with hair and teeth in good condition. Imagine then: 600 years and all your teeth! Although most of the body remains in its shroud, the few visible mummies are enough to make us feel a chill in the back! 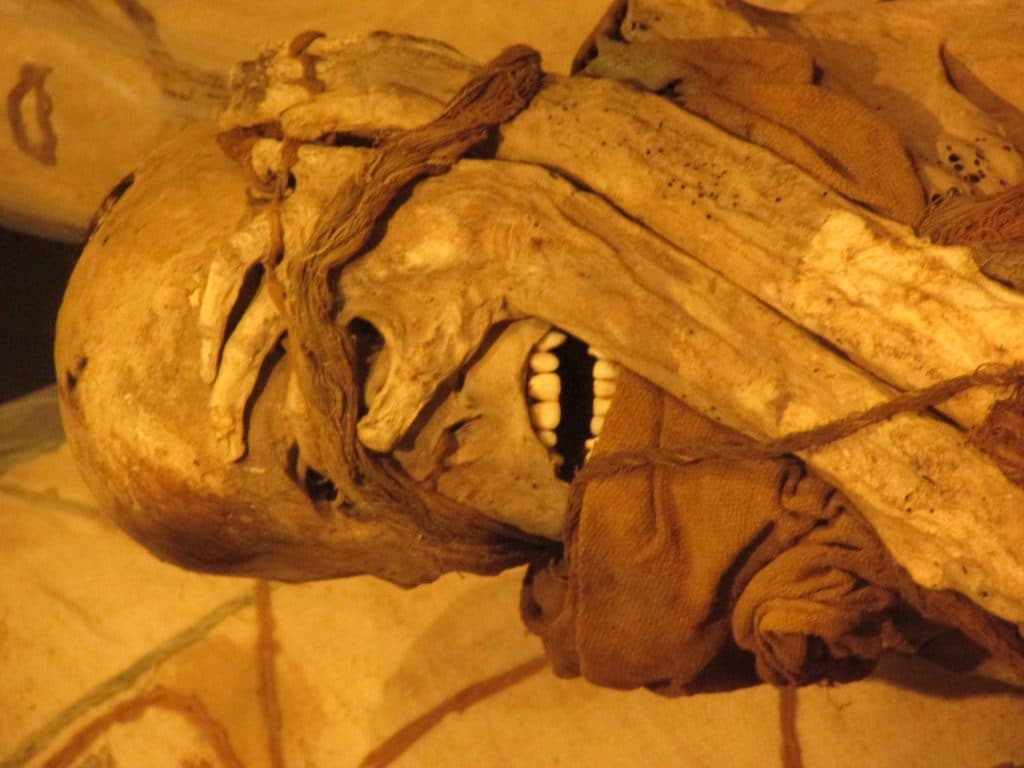 In the Plaza de Armas of Chachapoyas, you can hire a tour to visit the Revash mausoleums and the Leymebamba museum. With Turismo Explorer, it will cost you 110 soles, including transportation, visits and lunch.

Otherwise, you can take a taxi or colectivo to get to Leymebamba, which is 2h30 south of Chachapoyas.

Maybe you’re lucky and you’ll cross the town of Hierba Buena on market day. You can not miss: the local villagers come mainly on horseback. Then, instead of having rows of cars, you find rows of horses. The market is the main source of purchases and sales for people living in this region.

The entrance to the Leymebamba Museum costs 15 soles.