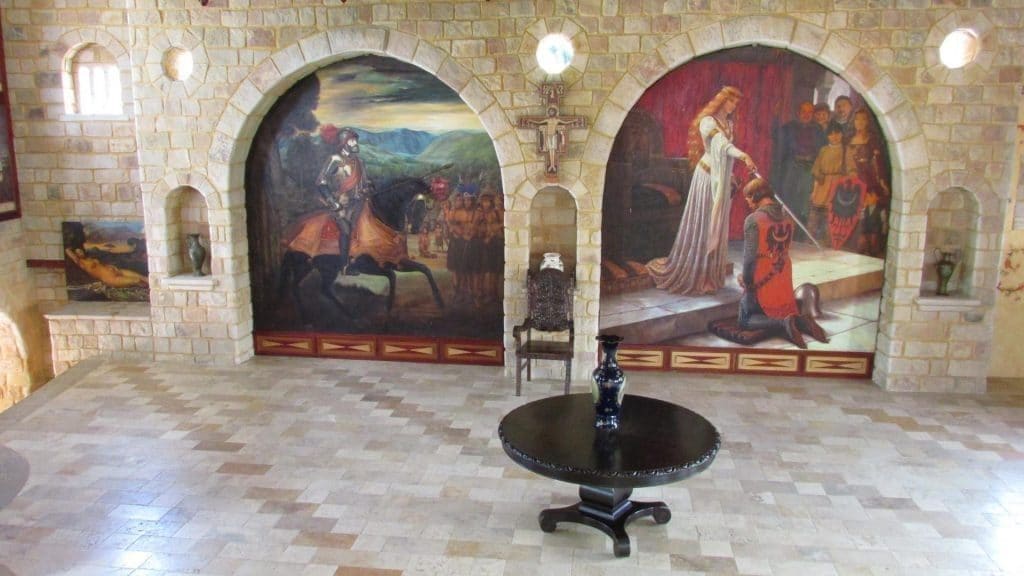 The Castle of Lamas

I already mentioned the village of Lamas, located a few kilometres outside of Tarapoto, in the San Martin region in northern Peru. Today I will talk more about the famous medieval Lamas castle, which you absolutely don’t expect to find here at all, in the Peruvian Amazon.

Why a medieval castle in Lamas ?

As you can imagine, this castle is not genuine. There were no medieval lords at the entrance of the jungle! It is a rich Italian, M. Nicola Felice who made his dream come true – and he still lives in a part of the castle!

Mr. Felice was in the San Martin region, working in the tobacco industry, when a strong earthquake hit the region in 2005. As he had completely fallen in love with the Lamas hill and village, that reminded him of Europe, he decided to build a medieval castle that has a great sentimental value for him.

He built the Lamas castle with natural stones from the region, moulded by hand and according to his ideas. The castle is built on five levels and at each level there is a magnificent view of the valley of the Rio Mayo and its surroundings. Also it is much cooler in the castle towers than below in Lamas, which is very nice.

According to the owner, the castle represents the meeting of two worlds, the European world and the world of Native Americans.

Initially, the castle was completely private, but at the request of the visitors of Lamas, Mr. Felice opened a part of the castle to the public in 2007.

Inside, the Lamas castle is decorated with frescoes of Pompeii, and with replicas of medieval paintings. Made by a young painter of the region, Geens Archenti Flores. For over two years, he painted the walls with acrylic Renaissance figures, like Dante Alighieri (Author of the Divine Comedy) the figure of the God Bacchus and many religious paintings. On the roof, there are 195 birds of the area with their names.

In many parts, there are stained glass windows, light seeping slowly and it offers beautiful colours inside. Some medieval style furniture can be found in the rooms.

A little kitsch detail is the horse´s head at the poolside. But I assure you that it just gives a mad desire to jump in the water (which unfortunately it is not allowed).

There is also a painting of Atahualpa, the last Inca.  Another one shows the meeting point between the Incas and the Spaniards in Cajamarca.

In Lamas, there are plenty of other places of interest to visit. Do not forget the Chanka Museum, the highest point of the town and a visit to the Warmi Wasi association.

The San Martin region around Tarapoto, gives you already a vision of the rainforest, but it is much less remote. You do not need yellow fever vaccine. But nevertheless, bring repellent, sun scream and hats – because it is hot, very hot!