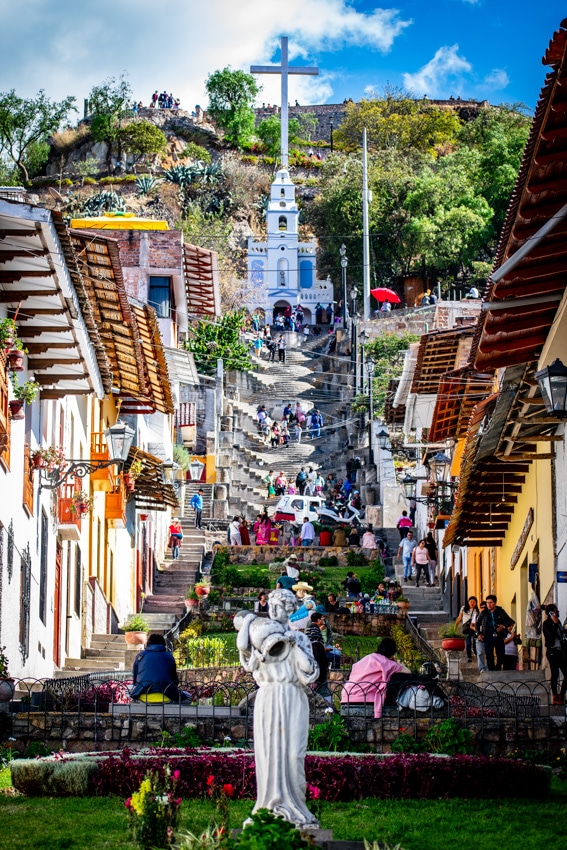 Everything you need to know about Cajamarca

The Cajamarca region is located inland in northern Peru. It is neighbour to the west with the coastal regions of Piura, Lambayeque and Libertad. To the east are the regions of Amazonas and San Martín. Cajamarca extends north to the Ecuadorian border.

It is in this region that traces of the first inhabitants of Peru were found in the caves that served as their home.

Enjoying a privileged climate, it is the most wooded mountainous region, as well as the first region producing cattle and dairy products of Peru. The tourism sector generates important resources for the region. This adds to the resources of agriculture and the mining industry. With the Yanacancha mine, Cajamarca has the largest gold mine in South America.

The Cajamarca region has a very interesting situation, at the crossroads of many roads. The Spaniards of Pizarro were not wrong to take this road from Cajamarca.

What to do in the Cajamarca region ?

In addition to the fact that Cajamarca was the scene of the historic encounter between two worlds, the region has many different interests, both archaeological, historical and natural.

Located at an altitude of 2,720 m and with a very pleasant climate, Cajamarca is the place where the Inca and Spanish cultures crossed before mixing. Cajamarca has one of the most important colonial architectural patrimonies of Peru. In 1986, the UNESCO named Cajamarca as a site of historical and cultural heritage of the Americas.

What to do in the Cajamarca city ?

Among the most important monuments are:

To have the most beautiful panorama of the city and the whole valley, nothing better than the Santa Apolonia hill. Previously it was called Rumi Tiana, which means “stone seat” in Quechua. In addition, there are some vestiges of prehispanic buildings and the so-called “Inca chair“, which is formed as an ancient throne carved into the rock.

Do not hesitate to walk around the city! Sometimes it is possible to enter some courtyard of houses or hotels that offer an interesting idea of the architecture of the colonial era.

A little outside the city are the Inca baths. These thermal waters above 72°C contain minerals with therapeutic properties for the treatment of bone and nervous system diseases. There are, among others, private pools and public pools. The Legend says that the Inca Atahualpa rested there shortly before his confrontation with Pizarro. 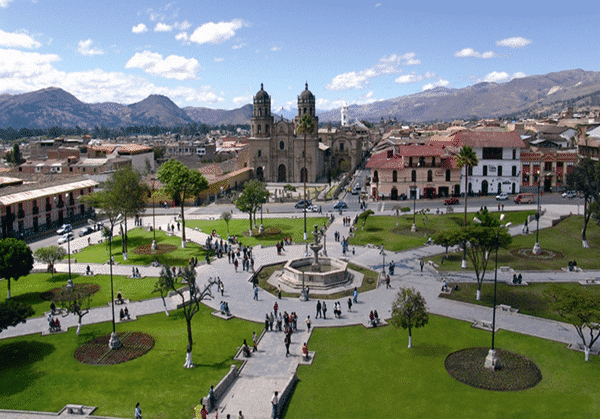 The history of Atahualpa

It was in Cajamarca that the meeting between Inca Atahualpa and the Spaniards of Francisco Pizarro took place in November 1532. A meeting that will change the world. In fact, this organized meeting will mark the beginning of the end of the Inca Empire and the advent of Spanish rule over a large part of the South American continent.

The Spaniards, 180 in number, will trap the Inca and his army of 40,000 men! An incredible story, but that will lead to a massacre for the Incas. This is a maneuver as improvised as it is bold. Who could foresee that the Inca would throw the Bible to the ground saying that he did not hear the word of God?

The native ruler will be saved for a simple reason: Pizarro and his men demand from the Inca people the payment of a ransom. In fact, near the Plaza de Armas, one of the largest in Peru, is the famous “rescue” room. The Inca Atahualpa had filled this room with gold and silver to pay his ransom, the most expensive in history – in vain.

The Spaniards condemn the powerful sovereign to death. They take advantage of the accusations like the polygamy but also the fratricide that weighed on Atahualpa against his half brother Huascar. The latter was on the throne of Cusco when he was in Quito, in what is now Ecuador.

The rescue room is the only vestige of the Inca culture in Cajamarca. This room is now protected from bad weather with the help of a modern structure. The place has become sacred, you no longer enter. In fact, there would be real blood on the stone where Atahualpa was executed.

Cajamarca also knows how to have fun with its famous carnival. It is one of the most popular festivals in Peru that takes place every year in February-March. This carnival has gained great fame thanks to the joy that reigns there, its music and its colors and the implication of the neighborhoods of the city in the organization of numerous parades, dances and meals. These festivities can last a whole month.

Near the central square of Cajamarca, in the place called “rescue room“, you can buy a “pass“. It will allow you to visit several places of interest in the city starting with the “rescue room”. From there, you will visit other more recent monuments, dating from the colonial period, including the church of Belen. 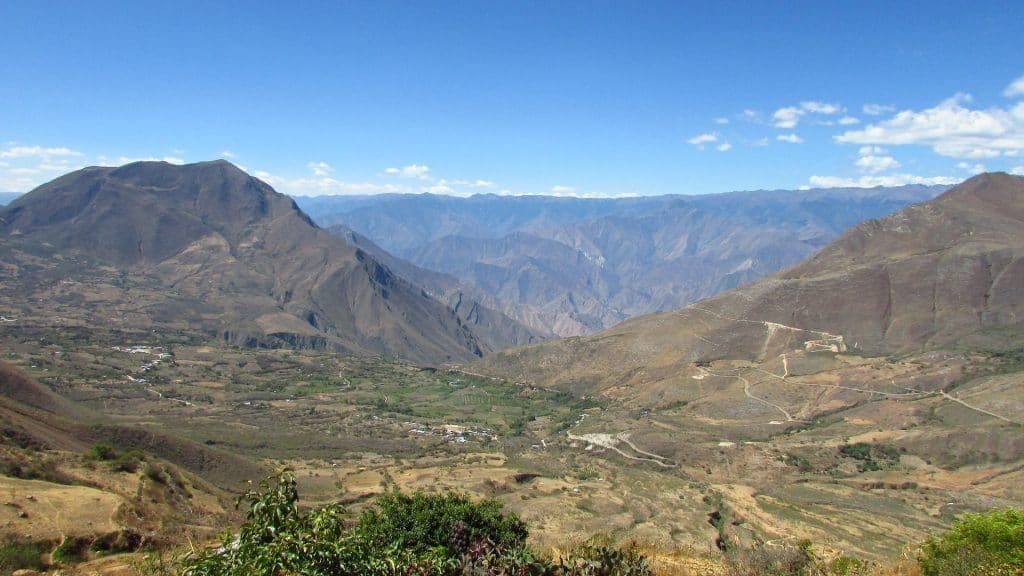 In addition to the colonial monuments that can be found in the city of Cajamarca, there are many pre-Inca remains to be discovered in the area. We recommend here 3 archaeological sites to see in the area.

The famous necropolis, called Ventanillas de Otuzco, is located 8 km from the city of Cajamarca. It looks like large square or rectangular niches, carved into a large rock wall of volcanic origin. The culture of Cajamarca buried their dead, often with their families.

We don’t know the exact time when the necropolis was used. Some specialists, however, believe that it belongs to the culture of Cajamarca (300 to 800).

25 km away there is another remarkable site: Combayo. It is very little attended by tourism agencies because it is further away from the city of Cajamarca. It impresses with the breadth of its funerary niches and its relative inaccessibility.

Our full article to discover the Ventanillas de Otuzco 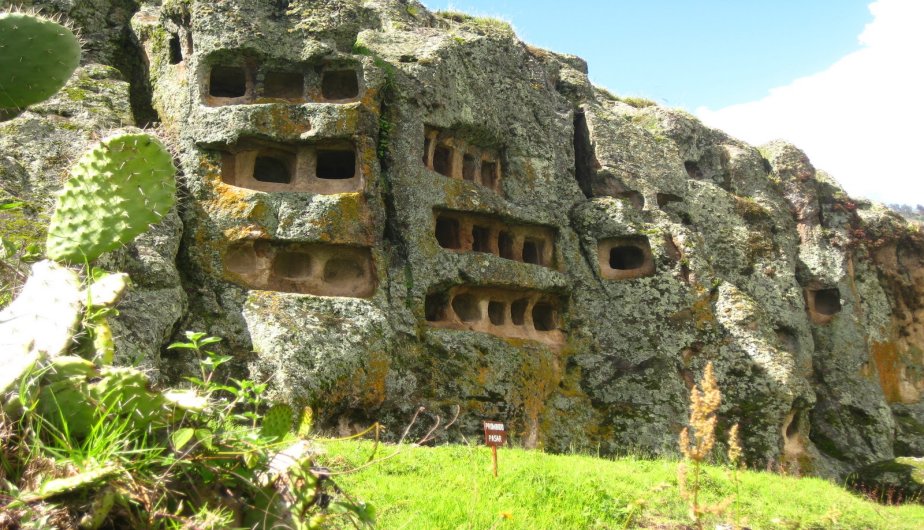 Discovered in 1937, Cumbe Mayo is another important site. Located 20 km from the city of Cajamarca, it is supposed to have been a ceremonial center where the water would be venerated. It is believed to be very old, approximately 1,000 or 1,500 years old.

There is an aqueduct of 8 km long, 30 cm wide and 50 cm deep. It carried water to the Pacific Ocean through a channel cut in stone. The canal fed several population centers from the mountains, including what would become Cajamarca.

There are also interesting petroglyphs whose importance remains a mystery, as well as a splendid stone forest and caves where very old engravings have been discovered.

Kuntur Wasi represents a fabulous testimony of the pre-Inca period. The center of Kuntur Wasi, or the house of the Condor, dates from 1100 BC. It was a ceremonial center with multi-storey platforms.

Structures and sculptures that show the influence of another important civilization: Chavin. In fact, we found the use of themes of felines and snakes in particular. A kind of reinforcement for those who have visited the Ancash region, including Huaraz, still in northern Peru.

Kuntur Wasi also shows us an excellent example of community management. After the excavations started in 1988 by the Japanese University of Tokyo, the approximately fifty families that make up the village protect and manage this group, whose origins go back more than 3,000 years.

Kuntur Wasi is a full day tour. It takes several hours to get there from Cajamarca.

Discover nature through farms and haciendas

The Porcon Farm is 30 km north of Cajamarca. This is the perfect example of a cooperative system that works successfully. You can stay there overnight, participate in rural tourism. You will participate in agricultural work, breeding, weaving, but also forestry. In fact, following a reforestation program initiated in the 1980s, this area has more than 10,000 hectares of pine forests.

The place can be found quite commercially during peak hours. Religion is also omnipresent with extracts from the Bible everywhere. But apparently, this is one of the secrets of their success: religion has united them.

Hacienda La Collpa is dedicated to raising livestock, 15 minutes by car from Cajamarca. There you can buy cheeses, natural yogurt and a delicious milk dessert called manjar blanco. 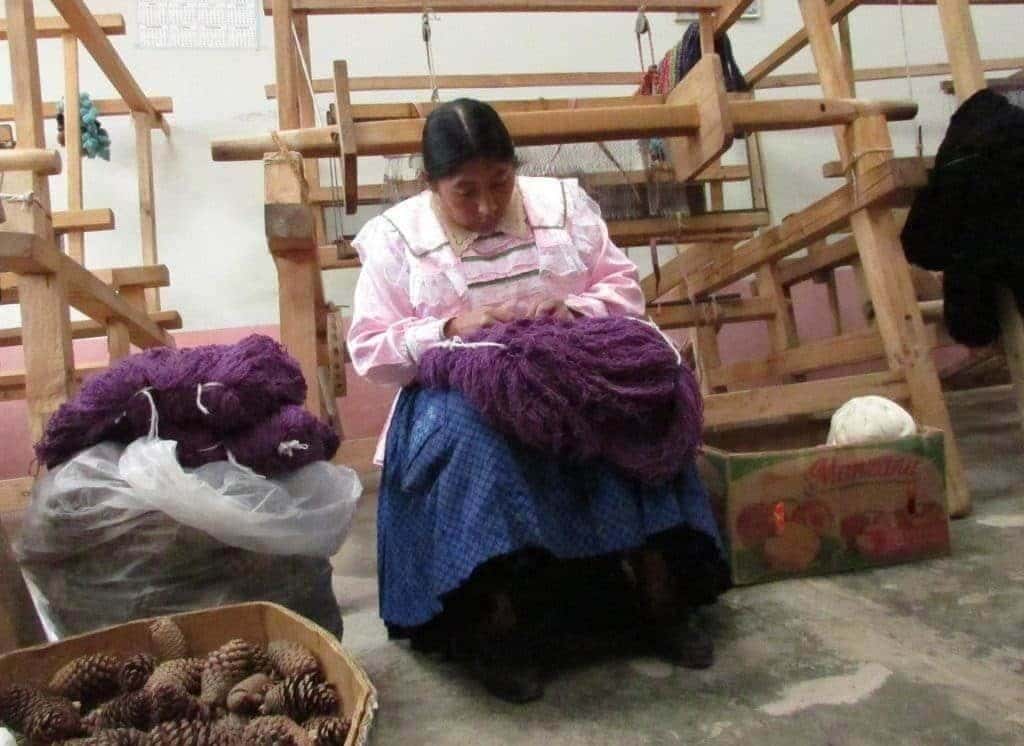 Traditional activities of the Cajamarca region

A strong tradition of breeding

The inhabitants of Cajamarca are traditionally breeders. There are excellent cow cheeses in the area.

This activity caused significant deforestation. More and more land is needed to create pastures. This reputation has spread to other areas of the North, where many Cajamarquinos have gone into exile.

Some tensions arise because of this activity. New pastures are created along the currents. Some of these streams feed the giant waterfalls of the Amazon. The most important thing is that they feed the population of the lower valleys with potable water. This is the problem.

Gold is not a new activity in Cajamarca. Already in the seventeenth century, the mineral was extracted in the region.

It is a fact that this activity brought prosperity and development to the city of Cajamarca. Its population has more than doubled in approximately fifteen years. The mine also provides important subsidies to certain tourism and community projects in the region.

The Yanacocha gold mine – the largest one in South America – was discovered by a French geologist in the early 1980s. It was operated until 1993 by a North-American consortium. Although this employs more than 8,000 people, this is a large-scale ecological disaster, since this open pit mine covers an area of 10,000 hectares.

The company wanted to expand the existing mine. This would have involved the drought of 4 lagoons, the disappearance of hundreds of springs and 260 hectares of wet meadows. When it came into conflict with local agriculture, there was strong opposition from the local population. After serious incidents in July 2012 that resulted in 5 deaths, President Humala agreed to suspend the project.

How to get to the city of Cajamarca?