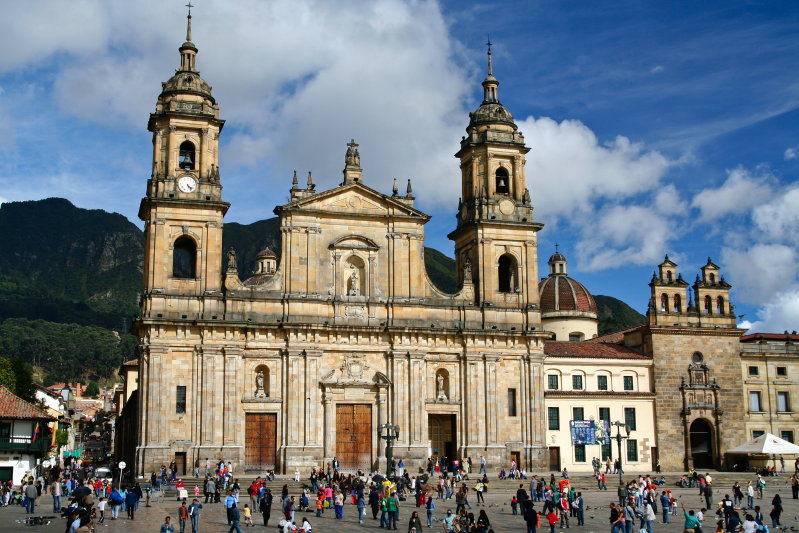 Top 7 sites to visit in Colombia

Colombia is a country that has been attracting a lot of attention since the disarmament agreements with the FARC in 2016. Which is normal, as there are so many different archaeological and nature sites to visit in Colombia !

I am often asked if it is safe to travel to Colombia, and I always say, “But, yes! “. Take the same precautions as in other Latin American countries, especially in big cities, but as soon as you travel off the beaten path, Colombians are open, endearing and true!

In a country twice as big as France, you find completely different ecosystems and climates, which is precisely one of the interests of a trip to Colombia. From the Andes with snow-capped peaks, the green Amazon, the coffee zone, deserts and beaches, there is something for every traveler.

To give you a little overview of the places to visit, we have prepared our list of favorite sites.

Medellin, the second largest city in Colombia, is a modern city and honors its nickname “City of Eternal Spring” (also like Trujillo in northern Peru)! Today it has 4 million inhabitants and is definitely part of your itinerary in Colombia.

Famous for its history of narco traffic, the city still has much more to offer than its past 25 years. Today blends tradition and modernism, it’s a booming city and you’ll love meeting Colombians, their passions and their dreams.

Between theater, street art, flower market, salsa dancing in the street, all this mixed with colonial architecture, you could stay easily several days in Medellin. For those who are just passing through, you will have to make a choice!

Do you know that Medellin was considered a city in the year 1813? It became capital of the Antioquia region in 1826. The city center today is a mixture of different influences, colonial, artistic, definitely one of the sites to visit !

Here you will find some colonial remains of the Spanish, such as the Santa Cruz Basilica and Villa Candelaria, but also the Museum of the Colombian painter Fernando Botero (recently exhibited in Aix en Provence at the Cantini Museum in an exhibition with Picasso) and the Fernando Botero square with 23 of his sculptures. 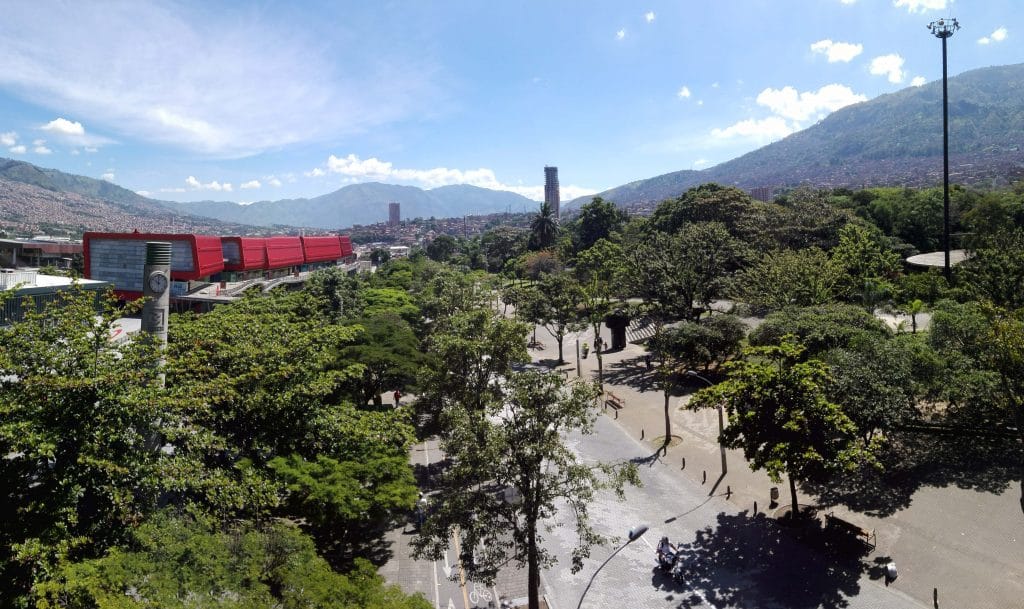 2) Community Tourism in Guajira and the desert

Guajira is a peninsula on the highest point of the South American continent, not far from the border with Venezuela. The landscape is semi-desert with large sand dunes and the sea as the horizon!

This region is very different from the rest of Colombia, which is more like an Andean region. Here is the territory of the Wayuu ethnic group. They live there, far from the rest of the world, still rooted in their traditions. They speak their own language, in addition to Spanish. You will definitely see Wayuus women weaving mochila bags or hammocks. Know that it takes up to 4 weeks to make one bag!

To get there, you must organize yourself or go through a local agency. On the way you pass by lunar landscapes, breathtaking, between salt flats, desert villages and surf spots. But don’t worry, mass tourism has not arrived here yet. It is one of these sites where you will feel out if time. You will probably sleep in a hammock in a homestay, under the stars and enjoying a lactic lane illuminated like nowhere else (light pollution is virtually non-existent in Guajira).

Enjoy sunsets over the sea while sitting on the dune. The flight of pelicans will leave you speechless. 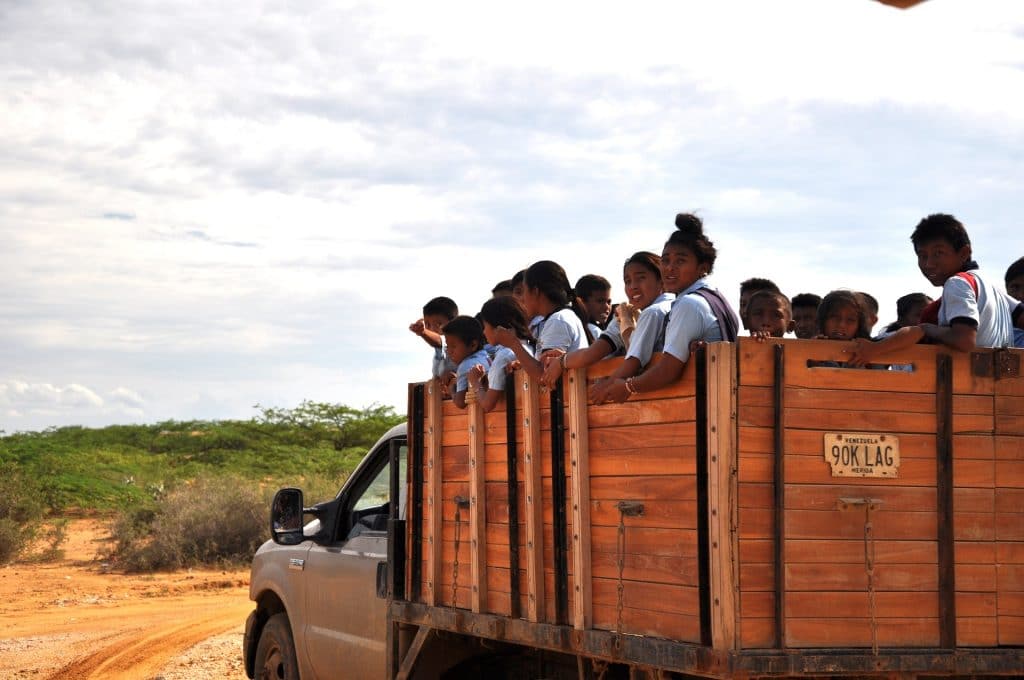 3) Salento and the Coffee Zone

The village of Salento is known for its colors, alleys and sweetness of life. Take the time to stroll through the alleys with colorful houses in a colonial style, typical for the region of Antiquioa, which is one of our favorite sites in Colombia.

From Salento you leave for the Cocora Valley which was a high place of rubber production at the beginning of the 20th century, before dedicating itself to coffee.

The valley is known for Quindio’s wax palms, an endangered palm species that can reach 80 m and 100 years. It is an endemic species of Colombia, refuge for different bird species such as the “conures with golden cheeks”, parrots that have green and yellow feathers forming an ear.

If you have time, plan on staying in a coffee hacienda to see how they grow coffee and produce on the premises. 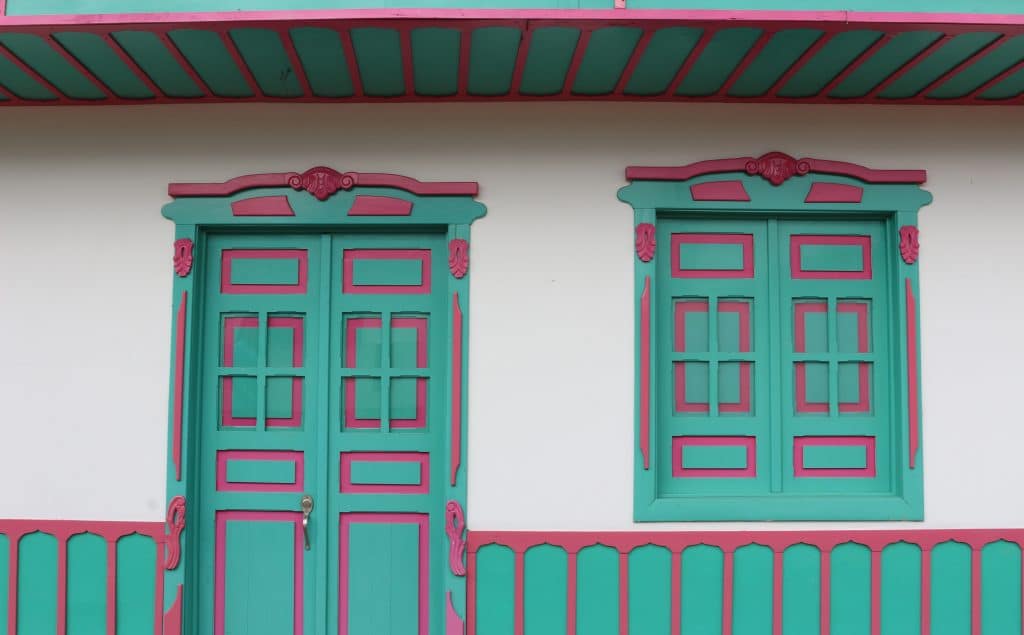 Cartagena, on the coast of the Atlantic Ocean, changes from the rest of the country because the atmosphere is more African-American than Andalusian. Within the colonial city center are so many different sites to visit, impressions to take in.

Here, people live by and for music. The Palenque culture has its own language as well as their own social, medicinal or religious practices. This influences their music and their songs. Moreover, the Palenque village of San Basilio (70 km from Cartagena) was listed by the UNESCO as Oral and Intangible Heritage of Humanity in 2005!

From Cartagena you discover the natural park of Corales del Rosario and San Bernado, spread over more than 120 000 hectares. The coral spans 197 km2, which makes 72% of the coral of the Colombian Caribbean. For the scuba divers between you, the Atlantic coast is a pure marine-life show. For the non-divers, maybe you want to commit to protect turtles? 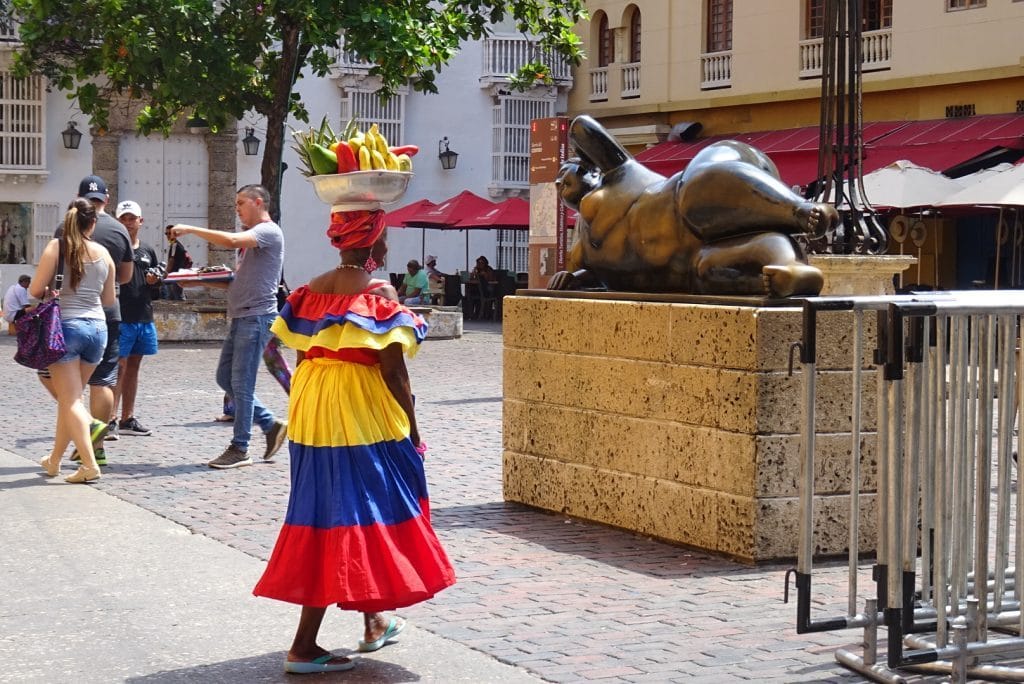 Bogota, capital of Colombia, will captivate you with its diverse culture. This city of 8 million inhabitants is located in the highlands of the Andes at 2 600 m which gives it the title of the 3rd highest capital in the world (after Quito and La Paz).

There are many sites you shouldn’t miss on your visit to Bogota. Visit the main museums of the country and stroll in the colonial district of La Candelaria. In this historic district the colorful houses are rather well preserved and the walls are decorated with street art paintings.

Unlike Medellin, the Spaniards were very interested in the current Bogota. Indeed, the pre-Columbian culture of the Muiscas worked gold in a beautiful manner and the Spanish were conquered. Today you can admire the most beautiful pieces at the Museum of Gold, still in the district of La Candelaria. You will see the amazing goldsmith works of the main pre-Columbian civilizations, but also their lifestyle and culture before the arrival of the Spaniards in Colombia.

Take the time to discover the Plaza de Bolivar with its public buildings such as Primada Cathedral, City Hall or the Palace of Justice and the Capitol. All in a Spanish colonial style that reminds many of Cusco, the capital of the Incas in Peru. Apart from the buildings, the Plaza will also seduce you with the ambience of the street vendors, the pigeons, the happy huzzle buzzle. Take a seat in a cafe and just breathe.

The other must-see museum is the Botero Museum, right next to the Gold Museum. In addition, the entrance is free!

Don’t miss to climb to the top of Cerro Monserrate with the cable car, you will have a superb view of the whole city! 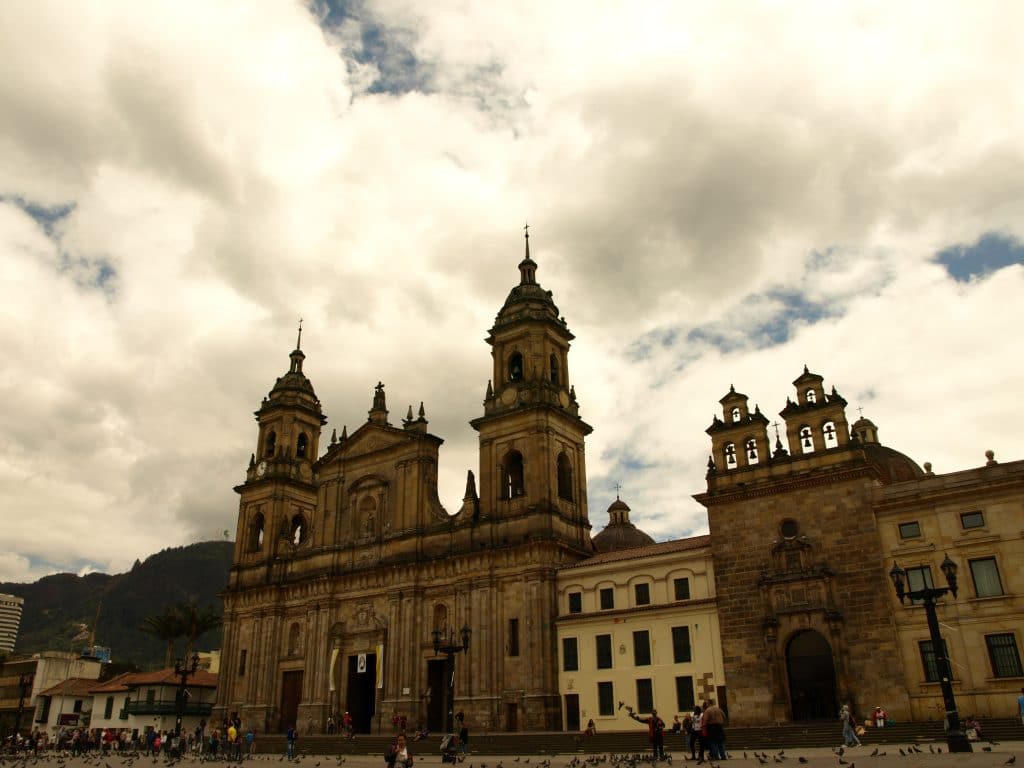 The Archaeological Park of San Agustin is one of the main archaeological sites of Colombia and covers 35 km2, listing hundreds of megalithic statues, the most impressive exceeds 6 meters high!

The park was declared a UNESCO World Heritage Site in 1995 and is the world’s largest necropolis in terms of surface area. In truth you do not have only one, but two parks – that of San Agustin and that of Alto de los Idolos and Altos de las Piedras.

You will discover more than 300 monumental sculptures. Archaeologists believe that they are religious monuments with a funerary function. Indeed, we know very little of the origin and reason why they were built. In addition, most of the site has not been searched yet!

The statues represent animals like monkeys or elephants, but also men and abstract forms, carved from volcanic rock. Their size ranges from 1 to 6 meters. They are witnesses of a civilization that had its apogee during the first eight centuries of our era, the San Agustin culture.

Allow at least two full days to visit the park because it is really worth it. In addition, access to San Agustin is not easy and takes time, so you better take time to enjoy the place..

Located on the Colombian Caribbean coast, the Tayrona National Nature Park is another site to visit in Colombia. Well, it is a bit of a victim of its success. Surrounded by mountains and tropical forest with a paradise beach, you can imagine that the Park is popular with national and international visitors. We recommend you to visit it in the off season. Believe me, you will love it!

It is since the year 400 that the natives are present in this region of Colombia. It appears that there were 3 000 inhabitants in the plains of Tayrona. Four indigenous communities still belong to Tayrona National Park. They still live on their ancestral lands, considered as heritage of humanity.

Today these 15 000 ha (including 3 000 maritime ha) are the refuge for 56 endangered species. For ornithological enthusiasts, know that you find more than 400 species of birds, 40 species of bats or almost 60 species of mammals.

You might want to choose between relaxing or hiking in the nearby jungle. The landscape is incredible and the nature just spectacular. 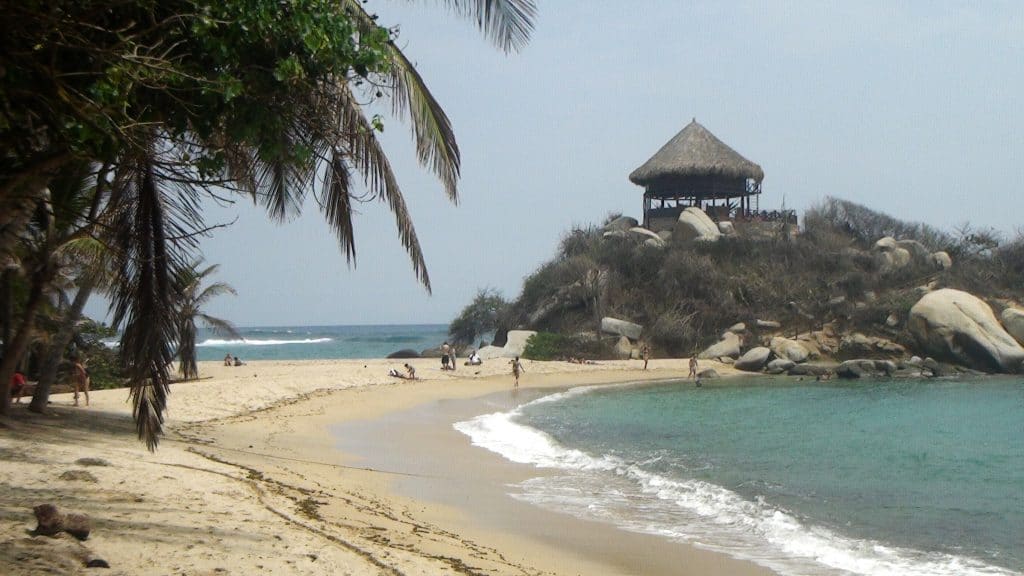