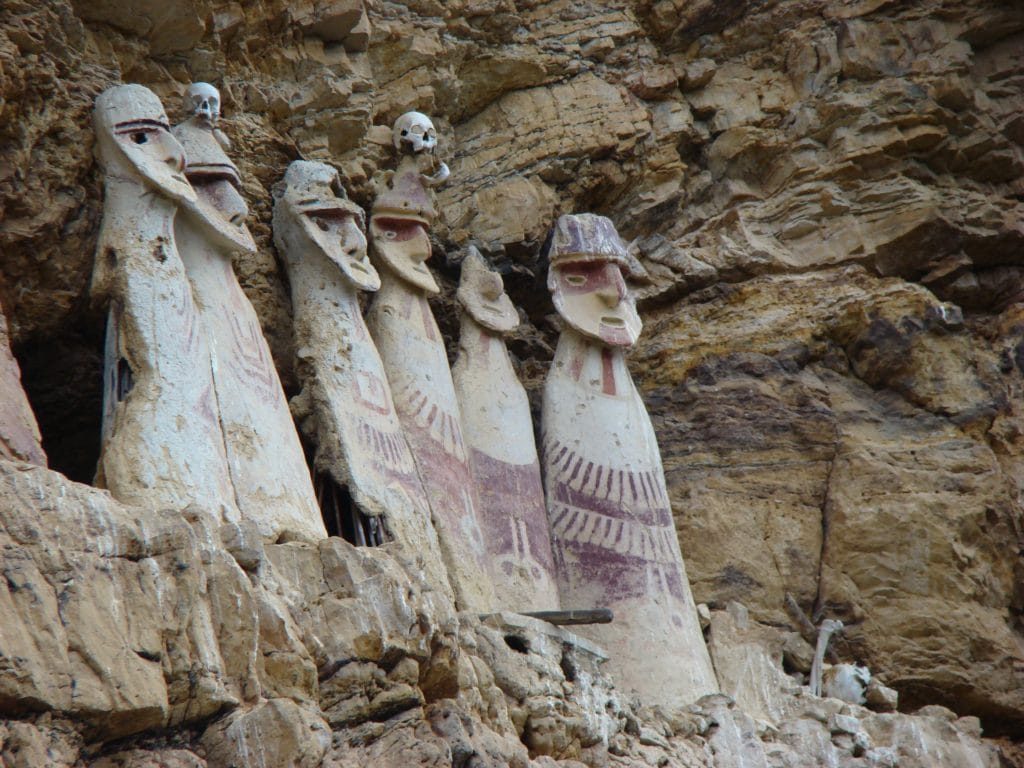 The Sarcophagi of Karajia are a collection of sarcophagi, found in the province of Luya, in the Amazonas region of northern Peru. These sarcophagi are unique in their type and careful elaboration.

The funerary ritual of the Chachapoya

The Chachapoya had several levels or burial classes. The first level is represented by the sarcophagi, then the mausoleums like those of Revash or as in the Laguna de los Cóndores, a little further south.

According to the Chachapoya funerary tradition, these sarcophagi have human forms and measure 2m50.

The Chachapoyas buried their important dead always in inaccessible places where they were previously protected from looters. In addition, the sarcophagi are oriented to the east (and therefore to the sunrise) and are always close to the water. The Chachapoya took care to respect its parameters to allow them to be reborn. This is valid for the Karajia, the Laguna de los cóndores or other sacred places of the Chachapoya. In addition, the sarcophagi sometimes became a village because the people of Chachapoya thought that the dead always watched the living.

The funerary ritual was mentioned for the first time in the Peruvian Mercury in 1791. But it was not until 1985 that a tour led by the Peruvian archaeologist Federico Kauffmann Doig allowed to locate the site of Karajía. It is the largest set of sarcophagi known today and remains intact. 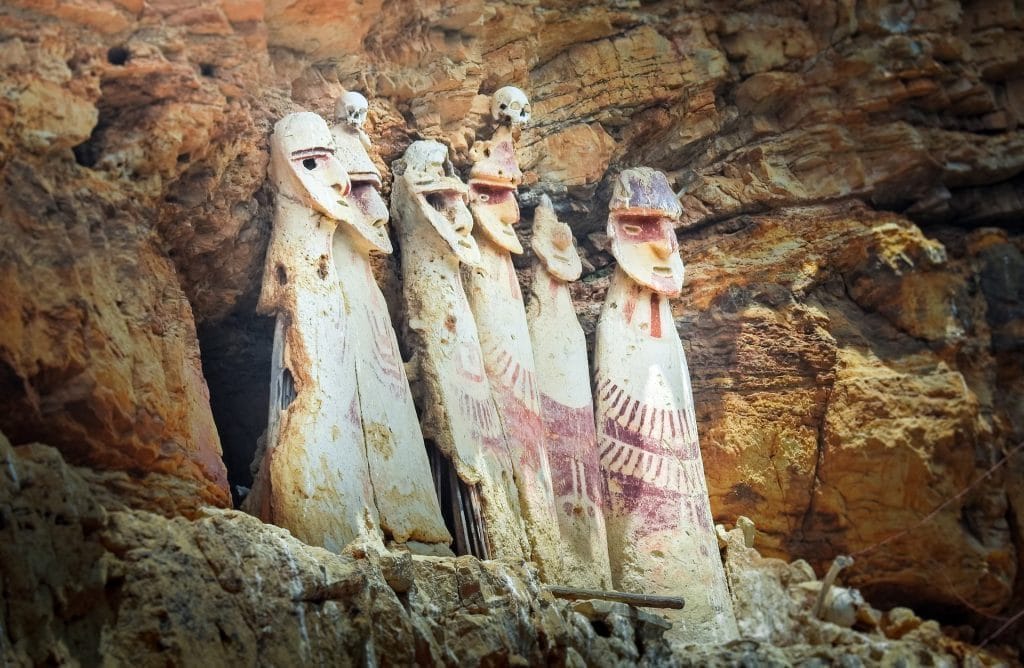 In Cruz Pata, if you wish, you can rent horses to go down to the Sarcophagi of Karajia. In fact, the road is not easy: the descent can be steep, there are stones and slippery ground. The descent takes about 25 minutes. Only once you pass the small shelter for travelers will you finally be able to see the sarcophagi. Do not look for it in the front, but on your left, on the side of the mountain. 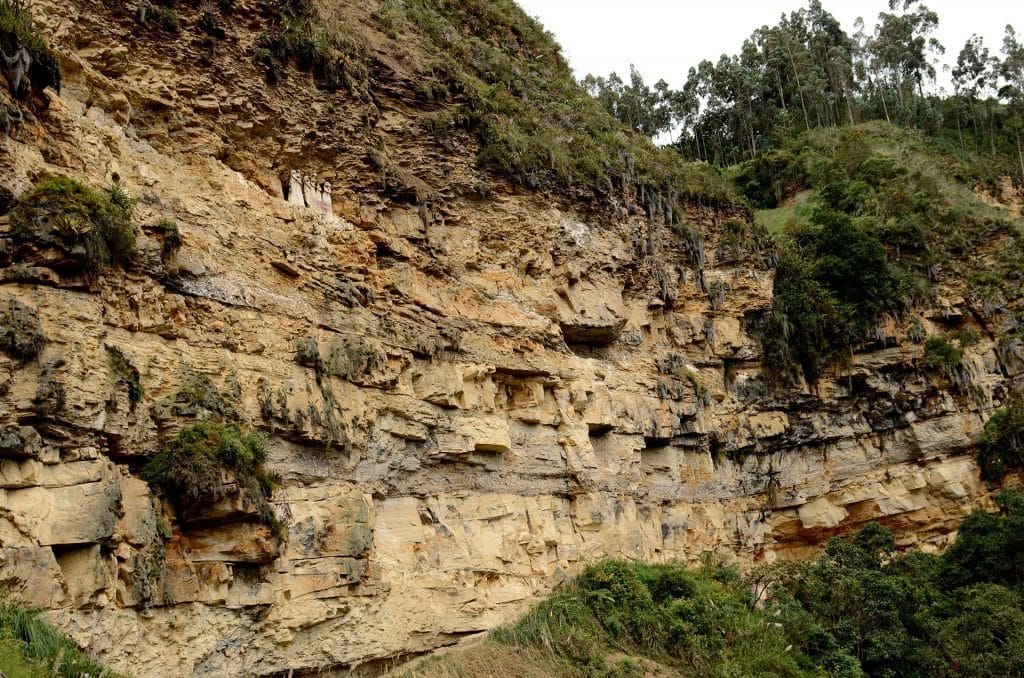 These sarcophagi were made of straw and mud. According to a dating of Carbon 14, the sarcophagi of Karajia date from 1460 to 1470, just before the conquest of the Incas.

However, as with almost all discoveries in the region, very little is known about their purpose, the mummies contained, etc.

Who is buried in the sarcophagi of Karajia ?

In each sarcophagus there was a mummy in a fetal position. Only very important personalities of the Chachapoya society had the honor of being buried there. It is believed that one of Karajia’s sarcophagus contains the high official of Kuelap. 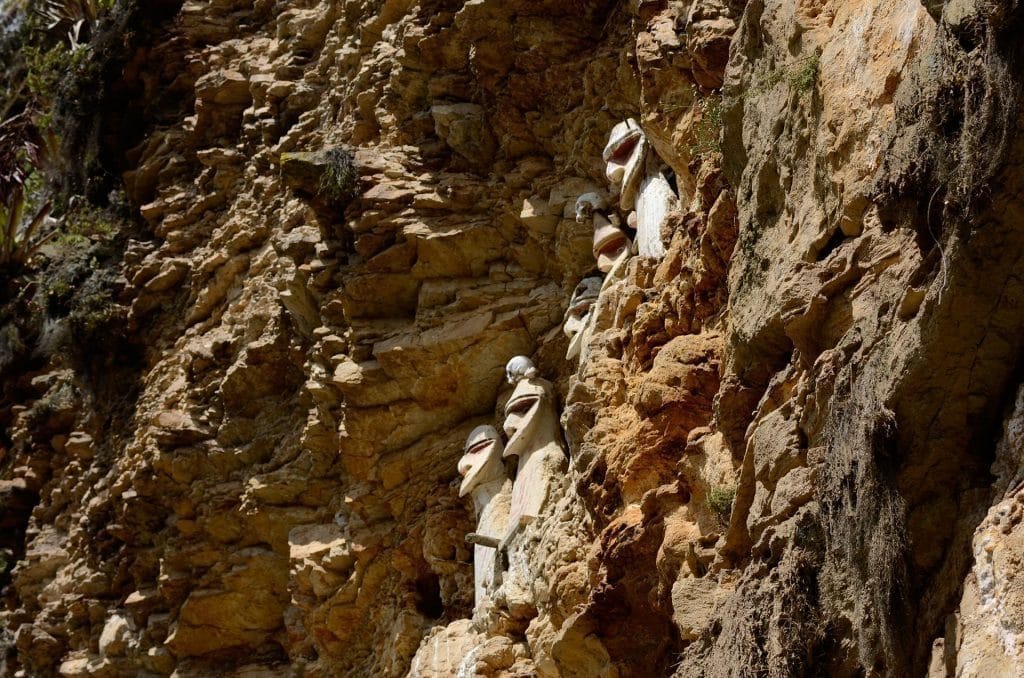 Sarcophagi of the 1st Category

Nowadays six sarcophagi remain in the site. The seventh, which was on the right side, fell, probably during an earthquake. The largest of the sarcophagi is more than two meters long. Each of them has a big head with a dominant chin. According to archaeologists, this represents the Chachapoya: it is supposed that they were tall, white skin and “European” appearance.

The characters have a decoration that resembles necklaces. At the height of the waist, there are decorations with feathers, to show the adoration of the birds, but also its proximity to the sky.

In terms of sex, especially in the two mummies on the right, we can see a symbol that could represent a male sex, which would show us the sex of the person buried in the sarcophagus. The personality on the far left shows in the same place a rectangular sign with a point in the middle. Would this represent a woman? We do not know, but the theory is extremely interesting, because revolutionary. In fact, only the highest dignitaries of the Chachapoya culture were buried there. Having a woman among them would mean that the woman’s place was very different from that of the Inca culture, for example. Among the latter, women were mainly destined to take care of the family.

Above two of the characters, you can see a skull in the head. This means that they were warriors.

Sarcophagi of the 2nd Category

The Karajia are not the only sarcophagi on this mountain. In fact, a little more to the right, you can see in an opening made in the mountain an elongated mummy.

On the left, this time, we see the remains of a sarcophagus that was looted in the 80s. In fact, although they have been placed in the height, the looters have managed to access some sarcophagi. However, the Chachapoya did not leave gold with their mummies, which allowed to preserve the sarcophagi.

If we continue a few meters further to the left, on the other wall of the mountain, we can see a beautiful sarcophagi of the 2nd category. It was placed in a niche in the mountain, closed with clay and painted with faces on the outside. 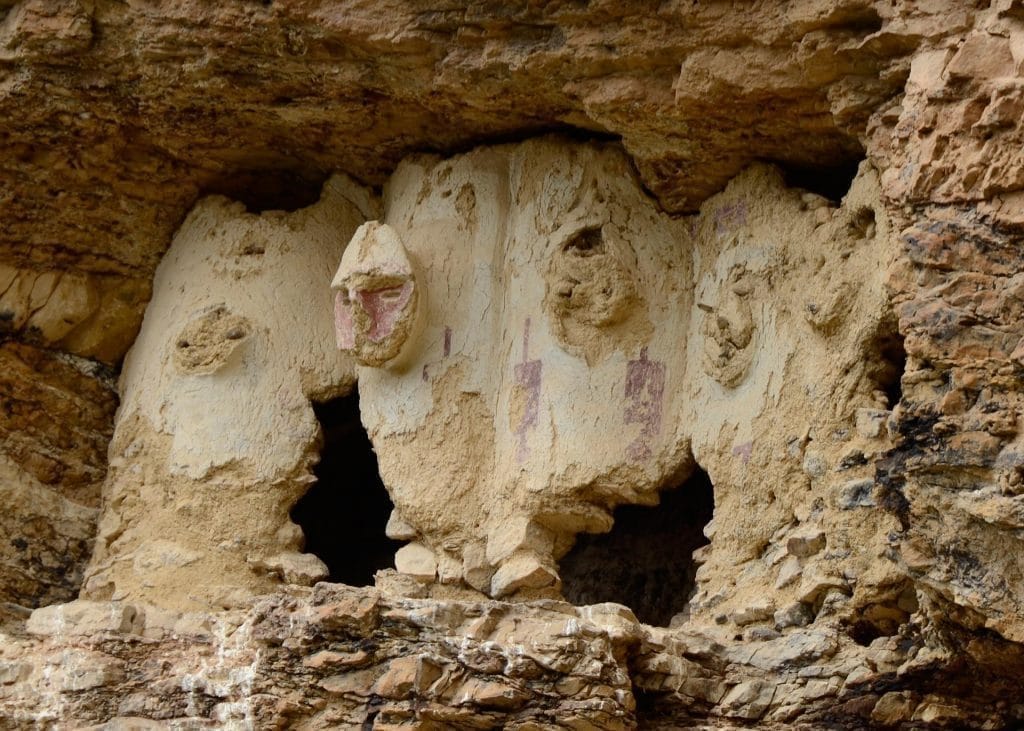 How to get to Karajia ?

The sarcophagi of Karajia are 1h30 from Chachapoyas.

We can go to Cruz Pata by private car without any problem. The stone path to Luya is in very good condition, and even between Luya and Cruz Pata (40 min), we drive very well, even without having a 4×4.

Arrive at Cruz Pata, you must go to the register and pay the entrance fee: 5 soles or 1.65 dollars.

Carry a pair of binoculars or a camera with a good zoom. Therefore, you can see the details of the sarcophagi that your guide will explain.