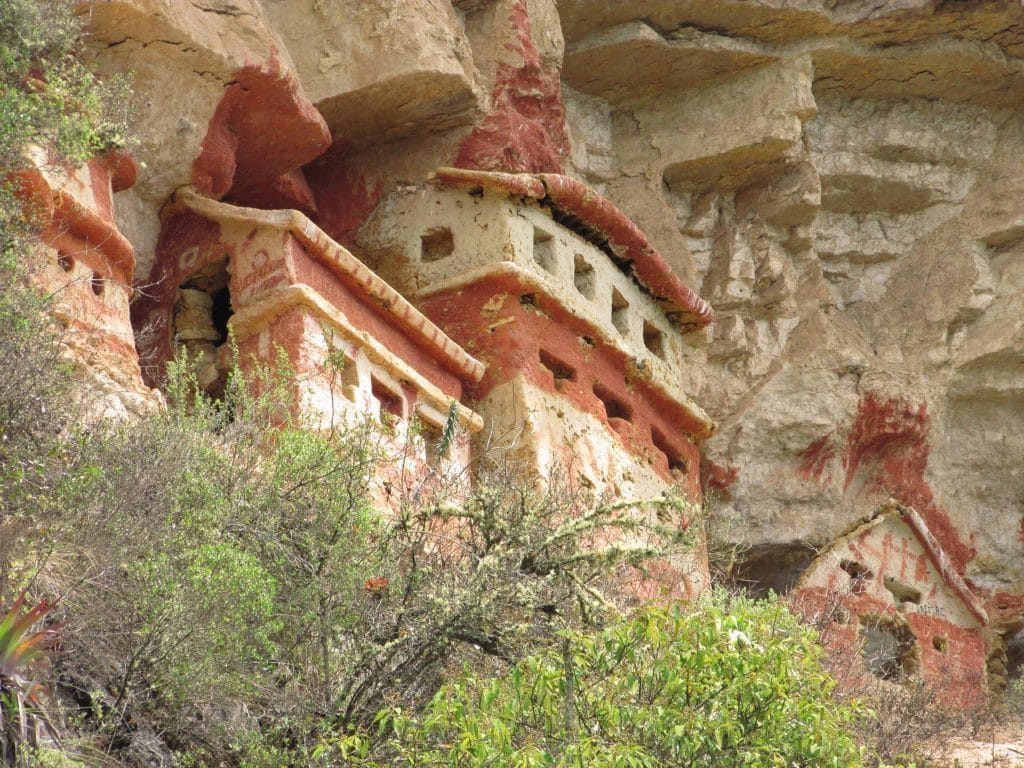 60 km south of Chachapoyas is the funerary complex of Revash, in the district of Santo Tomás, province of Luya. Revash is the name given to a group of mausoleums that is divided into two sectors.

At an altitude of 2,800 m, the mausoleums are located in a cave excavated at the height of the limestone rocks of Cerro Carbon.

Most of the houses in both areas were built side by side. They seem more inhabited houses than mausoleums. But these are the last houses of the deceased Chachapoya. In fact, this is confirmed by its content, its location in a remote region, difficult to access and the fact that they stand on the edge of a precipice.

The arrival to the Mausoleums

Made in 2010 by the inhabitants with the financial assistance of the State, the road is in good condition. The 1.5 km to the Mausoleums were paved with local stones in just 3 months. We walked silently for 40 minutes. The last 10 minutes are on a soil road.

You can see orchids and bromeliads. Your guide will also show you native trees of the region and tell you the story of the village of San Bartolo in the Amazonas region of Northern Peru.

On your head, you will see a small house of the Chachapoya dead. But the royal mausoleums are still a little further away.

Only once very close you can admire the first complex located in the mountain, with its beautiful cave paintings.

A little further down there is a rest area from which you can see very well the second complex, which can be admired in all the photos of Revash, more red and more like a “house”. 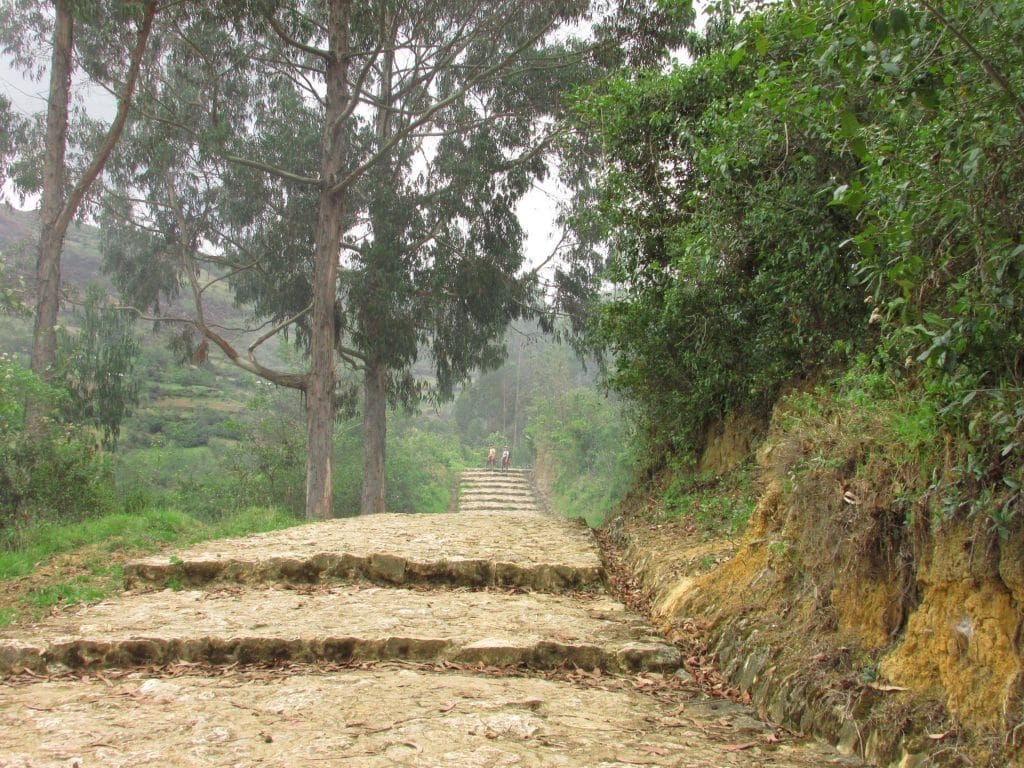 The height and shape of the houses vary. The houses are always adapted to the wall and the space of the cave in the rock where they are located. They can have one or two floors and there are only side entrances. Sometimes, between one mausoleum and the other, there is a wall in common.

The height of the houses is a little over one meter. It is tall enough to drop mummified corpses in a sitting position. The houses are almost intact, but unfortunately the mummies that were there were removed by man or eaten by the rodents.

The facade opens to the south, while traditionally the funerary buildings of the Chachapoya are to the east.

The houses are made of a mixture of stone and clay. Its roofs are only symbolic because they are protected by rock. They are painted red and around there are cave paintings, also in red. This color comes from the seeds of the achiote fruit.

The drawings come from concentric circles and images of camelids (llamas!). There are motifs that represent a cross in low relief, better known as “Andean Cross”, the Andean cross or “chackana”. We can also see “T” and “rectangles” whose meaning is always an enigma. Some scientists are trying to identify the designs that decorate the mausoleums and rock walls. The concentric circles would be symbols of life to accompany the living. Chakanas are associated with power and war: therefore, they are related to death.

Several objects have been found inside these mausoleums. Thanks to them, we can know that they were the prestigious and powerful collective residences of deceased people. French archaeologists Henry and Paul Reichlein believe that the construction of this village of the dead took place in the 14th century.

But apart from that, we know almost nothing about these mausoleums. Another mystery of the Chachapoya culture . Remember: they built the walled citadel of Kuélap and the Sarcophagi of Karajia, also in the Amazonas region. 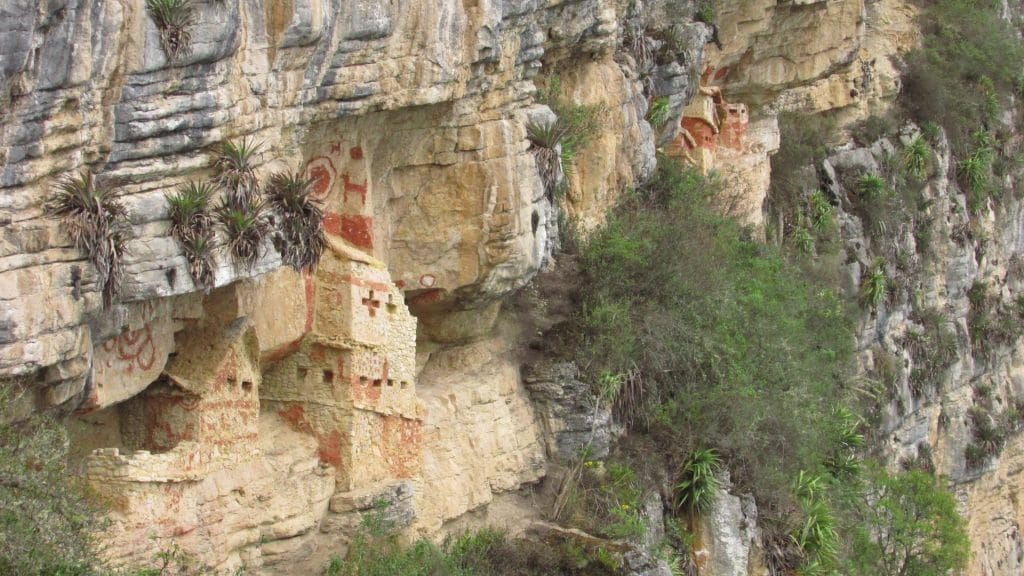 How to get to the Revash mausoleums ?

From Chachapoyas it takes 1 hour and 30 minutes to get to San Bartolo, in the province of Luya. From San Bartolo we walk along a stone path for 1.5 km until we reach the Mausoleums of Revash.

With your own car, you can also stop about 45 minutes before San Bartolo. From there, take a 4.5 km mini-trek to climb the Mausoleums of Revash.

The entrance is to the tourism association, which is well indicate for the place of Revash: 15 soles for an adult, 3 soles for a child.

You can also have a guide – orientador for 30 soles.