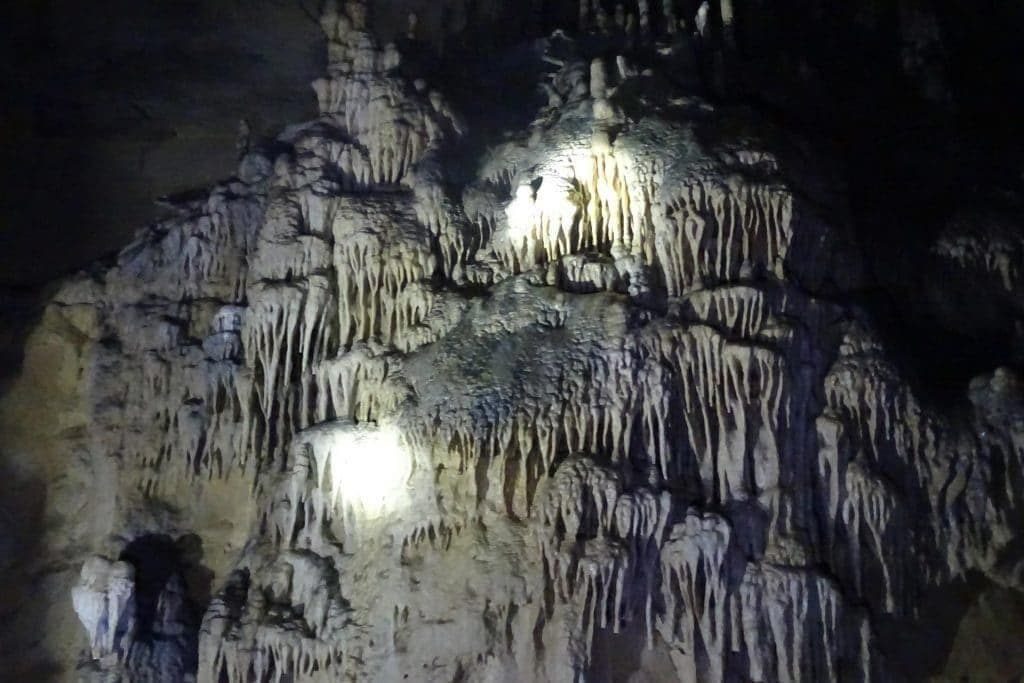 Quiocta and Vaquin: searching for lost fishes in the caves of Northern Peru

It was on invitation of our friend Stefan Ziemendorff that we went exploring caves. Stefan is the German explorer known as the “discoverer” of the famous waterfall of Gocta. Do you remember ? Gocta is one of the highest waterfalls in the world, located in the Amazonas region.

So we decided, my boys and myself, to spend a day in the caves of Quiocta and Vaquin, in the region of Lamud, Amazonas region, North of Peru, for an unusual expedition. 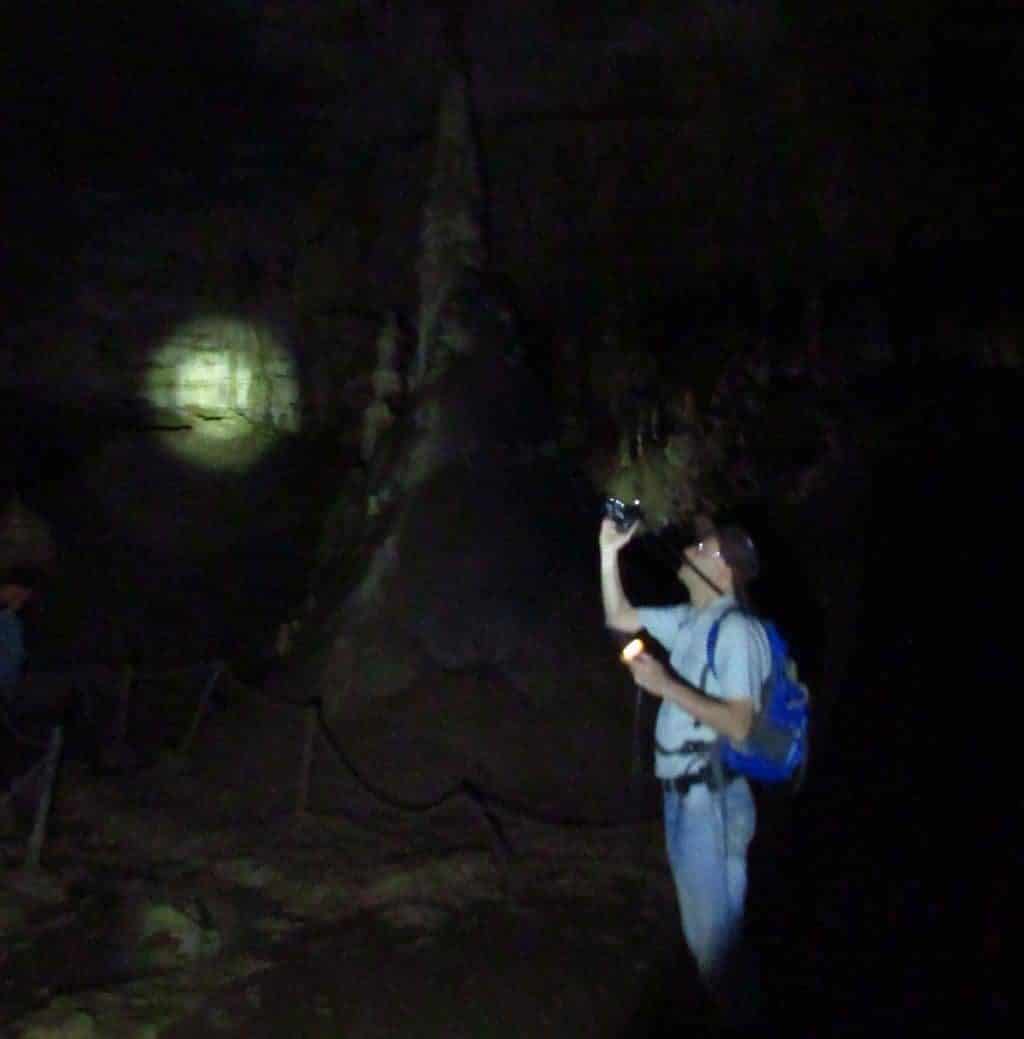 We go to Lamud at 8 am in the morning with Kleimer one of the guides of the city and a friend of Stefan. Lamud is located just under 40 km, or 54 minutes from Chachapoyas, capital of the Amazonas region.

First, we descend towards the valley of the Uctubamba River, before ascending to Luya then to Lamud. We are at 2,300 meters, just like in “Chacha”.

We wait for the opening time of the Tourism Association Office. In fact, we need the lamps provided by the association to be able to see in the caves. You should know that here in Northern Peru, the caves are not equipped with light like in Europe, you have to bring your stuff. Don’t forget the rubber boots. Otherwise, the association rents them as well. They are well equipped.

Once equipped we take our car and start to climb, first to San Cristobal del Olto and then to the caves of Quiocta.

At the entrance of the cave, we first pay the entrance. Kleimer distributes lamps to each one. The boys are excited. Here we are at 2.700 meters altitud. We enter the cave and turn on the lights.

The purpose of our visit today to the caves of the Lamud region, I can let you know now, is that we are in the search for a small fish that only lives in caves. We want to capture it and bring it back to the University of Chachapoyas to identify its species.

The cave of Quiocta is a regularly visited place in the region. You will often find a combination of day’s trips, which include the Sarcophagi of Karajia, and the caves of Quiocta.

The journey inside is relatively muddy and we are all very happy to have our boots. 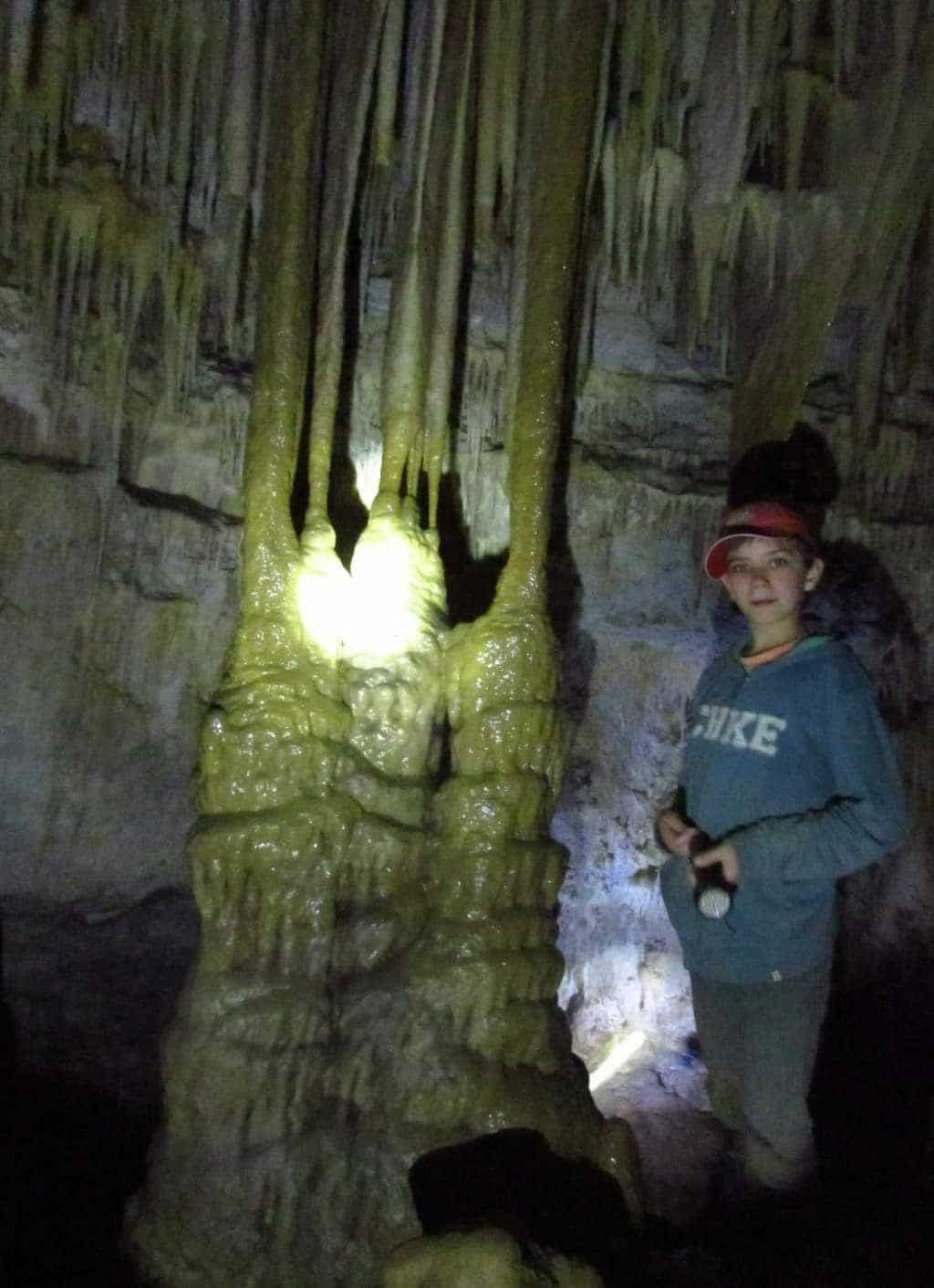 The caves of Quiocta are also known for their stalactites and stalagmites. Under the light of our lamps, appear these mineral cathedrals whose construction, by size, lasted millennia, tens of thousands of years. In fact, for the construction of 5 meters high, how many average years would it take, knowing that a stalagmite grows 1 cm every 100 years.

All this seems so fragile.

We can’t miss the presence of a large colony of bats. And yes, there are many, many. They, of course react to the light of our lamps, some pass very close to our ears.

However, let’s not forget the purpose of our expedition, the fish of the cave. In the cave, there are several water points. Our friends, the fishes, can pass from one point of water to another through their ability to crawl.

But today, in Quiocta, even being the first visitors, there is no trace of this strange animal. We go back to the entrance; we meet several groups of tourists who start their tour of the cave.

Back in the car, we have an appetizer, some sandwiches and fruits.

On the way to the second cave of the day: Vaquin

We hit the the road again for ten minutes, always upwards. We park the car by the side of the road and put on our boots again.

After several hundred meters through fields, you come to the entrance of Vaquin cave. This cave is not visited, or very rarely. The water of the two caves (Vaquin and Quiocta) are linked.

Kleimer distributes the lamps again and we enter this new cave. At the entrance, we find an owl hidden in a crack of the rock. We continue our progress, walking is easy because it is less muddy. 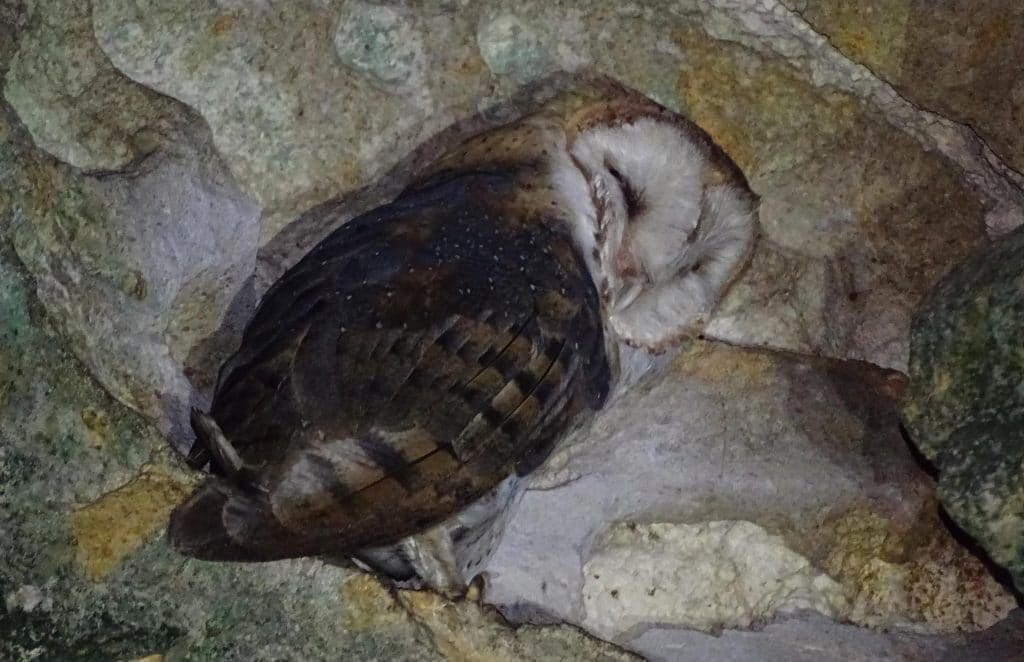 Less than 5 minutes later, a first puddle with water and yes, it is our fish ! We are only 80 meters from the entrance of the cave.

Equipped with a net, we catch this specimen. It measures about 6 cms. We put it in one of our containers with a little of water in which it was. Stefan completes the official form and then we are going to deliver it to our biologist friends at the University of Chachapoyas.

We have to do things in a scientific way so this expedition can be recognized as the discovery of a new species. 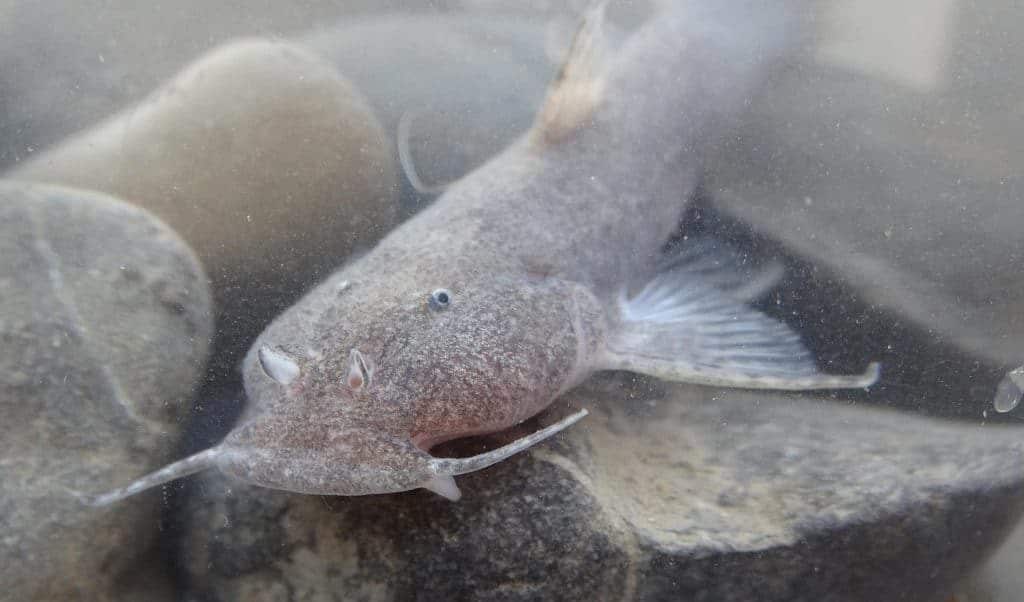 We take some photos. To be true, this fish looks like a kind of catfish. But we know that they are several species of catfish found in the different rivers of the region Amazonas. Is our species already known ? This is the question we came to look for here.

We continue even further in the cave and in the second puddle of water, we find new specimens of this fish, a little larger. We collect a new sample, taking advantage of the skill of our friend Kleimer.

The water in the Vaquin cave is clearer than in Quicta, there is also less mud. Maybe because there are no visitors ? Could be, as here in every point of water, we meet our little friend. If we could not find any specimen in the Quiocta cave, here the species is more abundant. We finally have them ! What a happiness !

We continue to advance. The cave forms a bottleneck. You almost have to continue face down, this leads to an underground lake.

It is beautiful but there is no way to continue, we didn’t take our inflatable boat. After enjoying the show, we have to return.

We go back on our steps in silence. Stefan, always good for a new idea, brought the things to make a torch. We set fire to a cloth soaked in kerosene and thus iluminate the interior of the cave. Guaranteed effect! 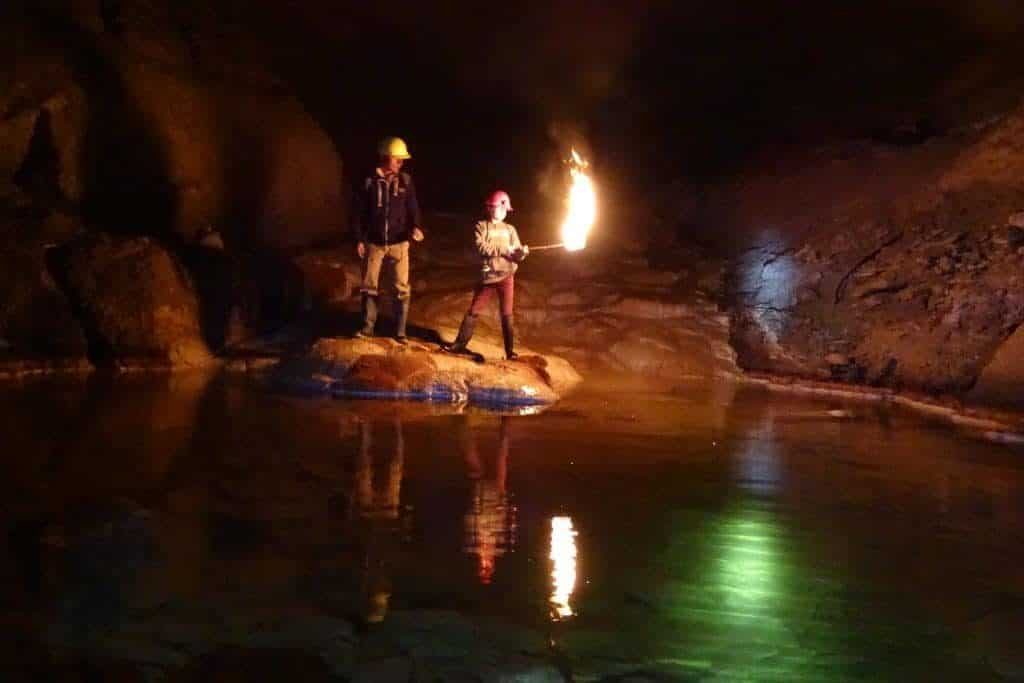 And off we go to the university!

We leave the cave very happily. We prefer this cave than the other one. Event if it is true, that there are no stalagmites or stalactites.

It is already past 4 pm, and we still have to go back to Chachapoyas. To officially deliver the fish to our biologists friends from the University.

We leave our friend Kleimer in Lamud and then we return to Chachapoyas.

We go directly to the National University Toribio Rodriguez de Mendoza, where our biologist friends Fernando and Rascon are waiting for us.

They will put several specimens of our fish inside formaldehyde. After that, they will send them to the coast, Trujillo specifically for identification. Only then will we know if it is or not an unidentified new species.

We have already planned a next expedition with our friend Stefan Ziemendorff, in the search of another cave species, a species half-spider, half-scorpion.

There is a lot of adventure that you can live in the Chachapoyas region in Northern Peru! See you soon for new adventures!