The Pyramids of Tucume are located in the Lambayeque region, 40 km from Chiclayo, the capital of the region, on the north coast of Peru. The landscape in this region is arid and dry, interrupted by green oases of agriculture, mainly rice.

This remarkable archaeological site covers an area of 220 hectares and has 26 pyramids.

The Lambayeque were excellent architects and builders. They erected the first pyramids of Tucume since the year 1000. It is believed that the creation of all the buildings of the site lasted for 4 centuries.

The truncated pyramids were richly decorated with friezes representing gods and maritime scenes. The largest pyramid is Huaca Larga: it measures 700 m long, 270 m wide and 30 m high. Its upper terrace is equivalent to 7 football fields. This is the largest pyramid in South America.

In addition, all the bricks used have a mark, which may be different. The pre-Inca civilizations did not have a writing system, but they used symbols, especially to mark property. Therefore, these marks would indicate the original brick factories. There must have been more than a hundred.

The pyramids were built around a mountain, Cerro la Raya, nicknamed the Purgatory. It would come from the conquerors, who threw those who did not want to submit from the top of this mountain. It is interesting to note that the pyramids are organized like the surrounding mountains.

As the region of Tucume is a desert, the Lambayeque also built long canals to carry water from the rivers beyond the site.

The residents of Tucume Pyramids

It should be known that in Peru, and especially in northern Peru, civilisations are older than the Inca culture. The Lambayeque culture (from 700 to 1400) has its origin in the Moche culture (between 100 and 700). they inherited their talent as artisans in metal and ceramics, but also as weavers. In fact, it is one of the civilizations that created the most beautiful goldsmith’s pieces, working the metal with great skill.

The Lambayeque civilization flourished as sailors and merchants. The sea was very important to them. In fact, according to the legend, Naymlap is the founder of this civilization, to which the Lord of Sipan belongs. Naymlap would have reached the coasts of the Lambayeque region in a reed boat braided with nobles and servants.

Some historians, including Thor Heyerdahl, have speculated that these people migrated from Oceania to Peru. Naymlap then takes power in the Lambayeque Valley and becomes a king. This figure is represented in many archaeological sites belonging to the sphere of cultural influence of Lambayeque, but also in the golden tumi, sacrificial knives. It always appears with the slanted eyes and the wings of a seabird.

According to the chronicler Cabello de Balboa (16th century), the name Lambayeque would even derive from the name of this mythical character.

The Tucume pyramids were not built to serve as a tomb, unlike the Egyptian pyramids.

In its halls, archaeologists have exhumed remains of food, bones of Llama and bones of fish: the base of the diet of the Lambayeque elites. Excavations have also uncovered the remains of a 35-year-old man with his jewelry and headdress. So he was a member of the ruling class at that time.

Therefore, the pyramids of Tucume served as a place of residence, a palace for these gentlemen. Tucume was going to be a particular city with 26 lords on top of 26 pyramids. Archaeologists believe that the latter shared control of several sites in the valley.

The Lord received priests and courtiers in the corridors at the top of their pyramids. But there were also kitchens, workshops, sheds and a large outdoor space, surely reserved for religious ceremonies.

At that time, it was thought that the mountains had religious and magical powers. When building a pyramid, the Lambayeque built a copy of the mountain. Therefore, they could enjoy the same supernatural powers that would allow them to dominate the forces of nature. The lords who lived on top of the pyramids were considered demigods, capable of mastering these powers.

The gods sat in the mountains and the lords lived on top of the pyramids.

The social pyramid never expressed itself so literally: the Lord is at the top.

Occupation of the site

There are traces of occupation on the site that range from the Lambayeque culture to the Inca occupation. Two buildings testify this:

The abandon of the site

In 2005, archaeologists discovered 119 bodies that had the same marks on the cervical vertebrae. Then there were many human sacrifices, necessary in times of crisis to appease the gods. The increasing number of human sacrifices led to the belief that something was happening that the lords could not control.

As the sacrifices were in vain, they set fire to the cursed pyramids to purify them and left the city. In fact, throughout Peru, fire was used to purify.

The Tucume Museum is spread over 4 rooms. It explains in a playful way the culture of Lambayeque, its customs and religious traditions, the living conditions of the inhabitants and their beliefs. In fact, they believed in a celestial life, a life on earth and a life after death. All this is very well represented in many drawings and reproductions in ceramics or fabrics. 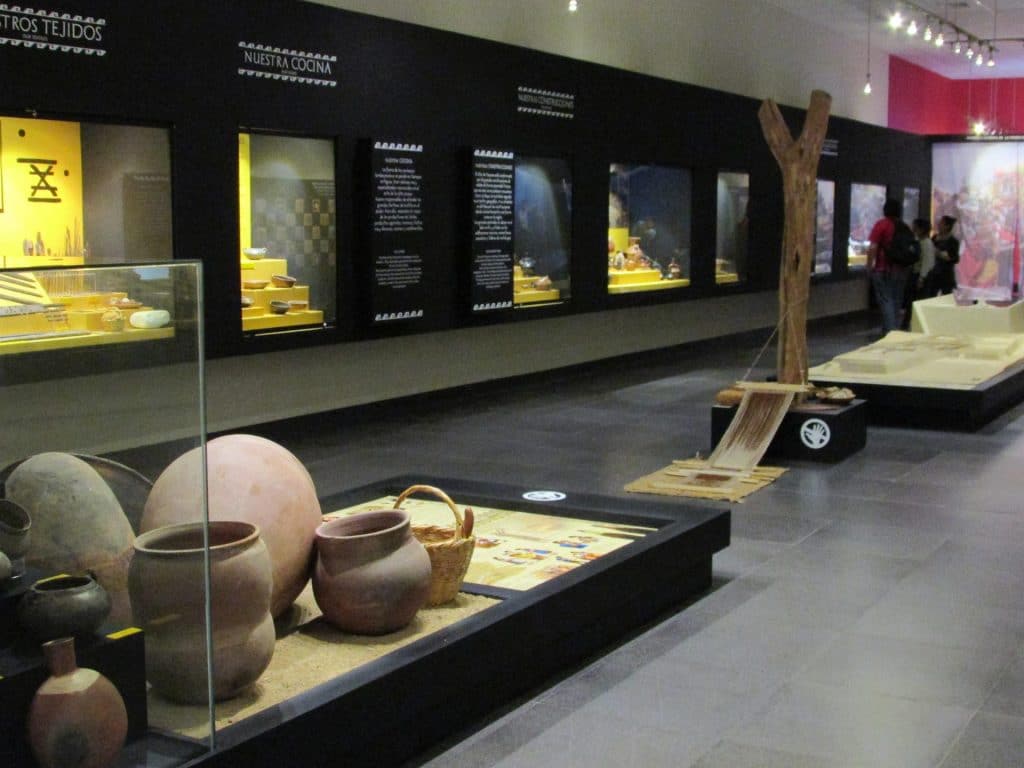 If you are already in Chiclayo, take public transportation to reach Túcume in 30 minutes.