Today we begin a new day of discovery in northern Peru. We meet with Philippe, co-founder of Phima Voyages who will take us to see the famous sarcophagi of Karajia.

These sarcophagi are part, with Kuelap and the Gocta waterfall, of the main attractions of the Amazonas region. In fact, northern Peru is for now considered by travellers as an extension of a trip to the south. This is the reason why most visitors spend only 3 or 4 days in the North, the famous Machu Picchu remains the priority for a first trip to Peru.

As you may have read the previous articles, there are many other things to visit and 15 days are not enough to discover!

The trip between Gocta and the small town of Cruz Pata, starting point of the walk takes about 1 hour 30 minutes by car. We pay our entrance fee, write our names in the visitor’s register and are ready for the 20-minute downhill  hike through the Peruvian fields. Just behind the last corner, we see the sarcophagi. 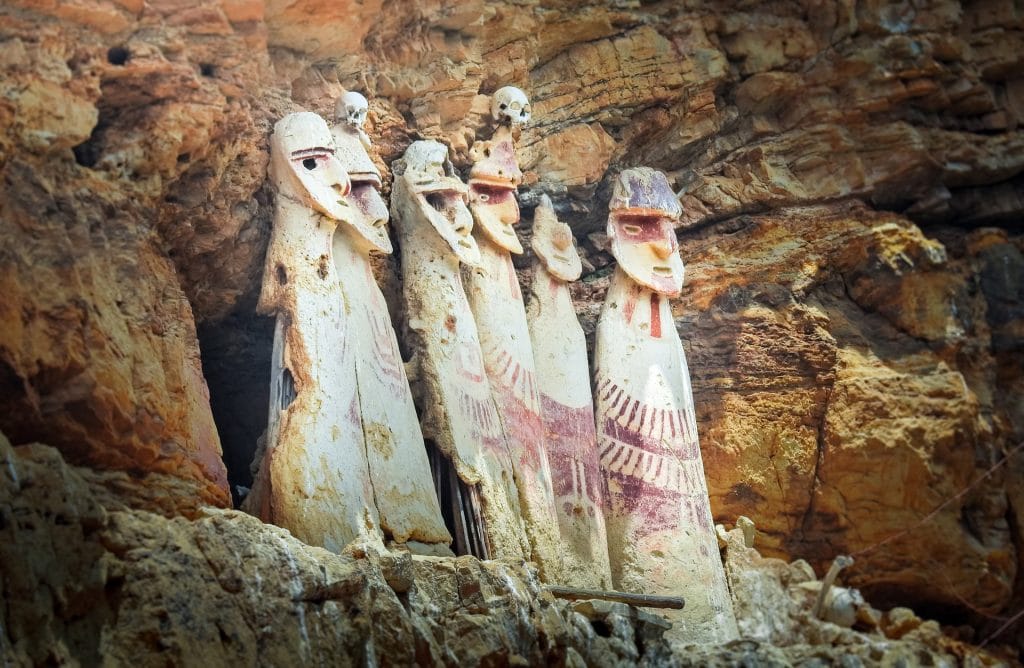 Like the Revash mausoleums, they are located high above in the cliff, in the cracks of the rock, this position allowed them to escape the looting.

The sarcophagi of Karajia represent human forms and are about 2.5 meters high. There are six in total. Its structure is of bamboo, covered with a mixture of mud and straw to give them this singular form. The head represents a funerary mask and their bodies are painted red and white with different geometric patterns.

The heads of two of them are decorated with a skull, which archaeologist say they would be great warriors. Within each sarcophagus, a mummy could be inserted in fetal position. According to the Chachapoyas culture, only the highest dignitaries were entitled to this privilege.

On the same cliff, there are also smaller sarcophagi slightly less developed, which probably served as a burial with other dignitaries. The following video shows the locations.

After having admired these stunning creatures for a while, we slowly walk back. It will take us a little more time (about 30 minutes) since the ascent in full sun is a bit rough.

We take the car for an hour to reach the city of Lamud, where we will spend the night at the hotel Tambo Sapalanchan. This hotel, with the Estancia Chillo and Gocta Lodge, are our 3 favourite accommodations.

Just enough time to leave our baggage and we continue with the next visit of the day: the caves of Quiocta. To enter the cave, you must first be equipped with boots and headlamps. We make a stop at the association’s office that manages the cave to get our equipment and our guide. It is actually forbidden to enter the cave alone.

After a trip of half an hour and a 5-minute walk, we arrive at the entrance of the cave.

Once inside I understand the need for lamps because the cave is not fitted and therefore the only light will come from there. I admit that I am not very calm because we do not see beyond our feet that literally sink in the mud. (For that reason we wear the boots !) We also understand very quickly that for the safety of our camera equipment it is better to store it in our backpack.

Little by little, as we advance in the cave, the guide shows us several curiosities such as bones and skulls, but the most impressive are the numerous stalactites and stalagmites that sprinkle the cave. The cave is huge and really beautiful. And finally, the fact that the cave is not illuminated adds an element of surprise in the discovery and the atmosphere is a bit mystical. 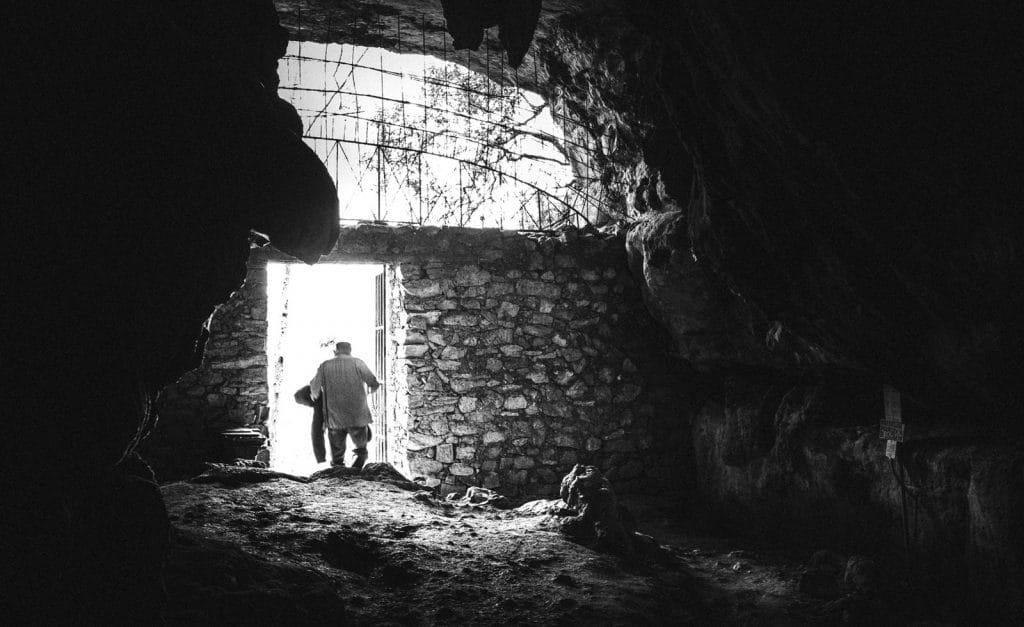 After a one-hour visit, we leave the cave and realise that we are totally covered with mud up to the knees.

Back in Tambo Sapalanchan and after a shower, more than necessary, the owners wait for us for dinner.

Nora and Paul, both from Lima, fell in love with the Amazonas region and decided to open a hotel 3 years ago. This is not a classic hotel, in the sense that the ten rooms are distributed in small houses. Each house has a huge bedroom with super thick mattresses. Nora has thought of everything, even a full set of bathroom items including a hair mask, what a luxury! 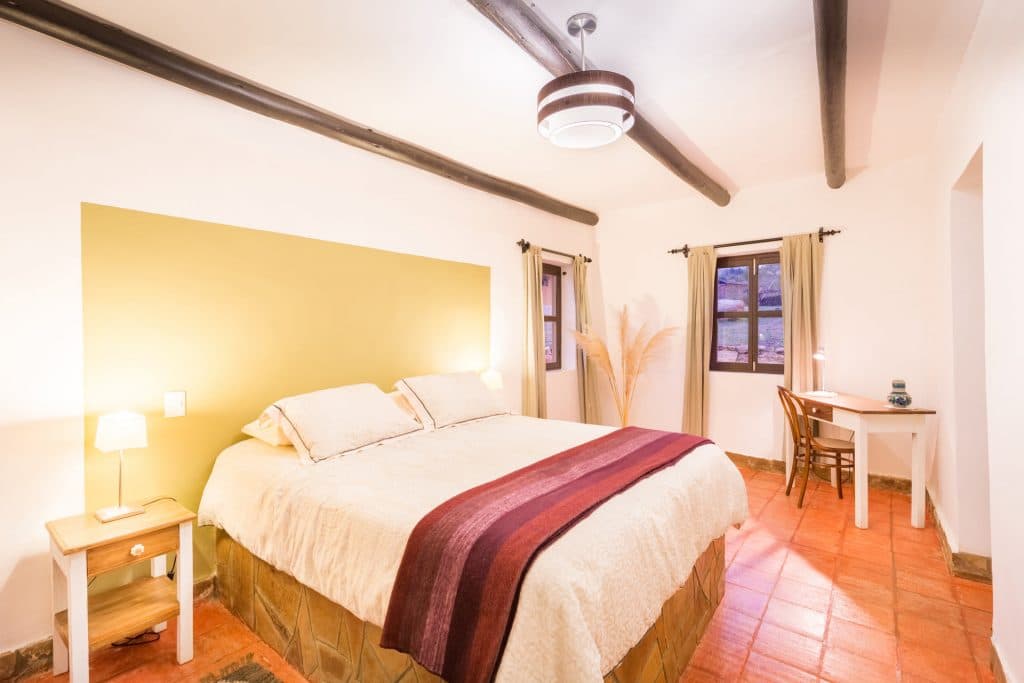 As for Paul, he later tells us that he was a chef in Lima before. Well, we will not be disappointed. Because the chef makes us more than happy with the preparation of homemade pasta just for us. The dinner menu: Fettuccini with pecan sauce for one and alfredo sauce for the other + a big piece of carrot cake. And yes, Nora also makes delicious cakes that she sells in Chachapoyas.

It is not necessary to say that after all that, the bed is waiting for us with open arms! 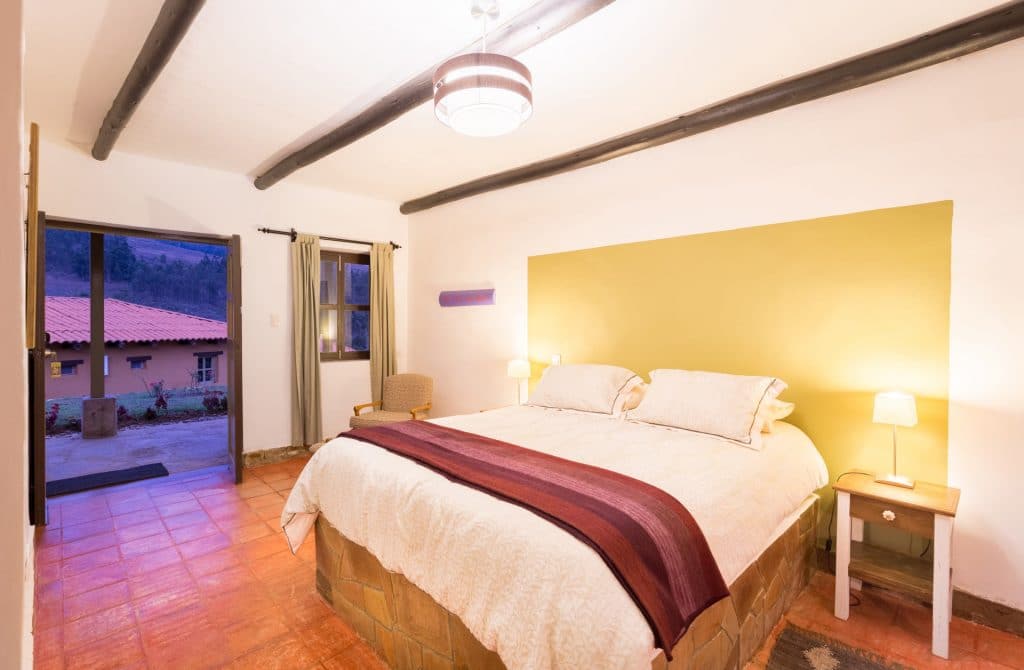 The next morning, we had a huge breakfast, with a small surprise for my partner. He choose to drink an artichoke tea! Apparently, the Peruvians often take this before breakfast since it has medicinal properties, but it is very bitter and not at all to my taste !

In the kitchen, Paul has decided to share his experience and offer cooking classes for the guests. Thanks to Phima Voyages, we have the opportunity to participate in them !

So we put on the aprons and the caps. And off we go for about 1 hour and a half of preparation ! With the help of Paul we prepare the following menu. A starter with quinoa salad, lomo saltado (typical Peruvian dish made with meat) and a dessert with condensed milk and lemon. We are going to try these recipes (that we received translated into French by Philippe and Martina) once back home. 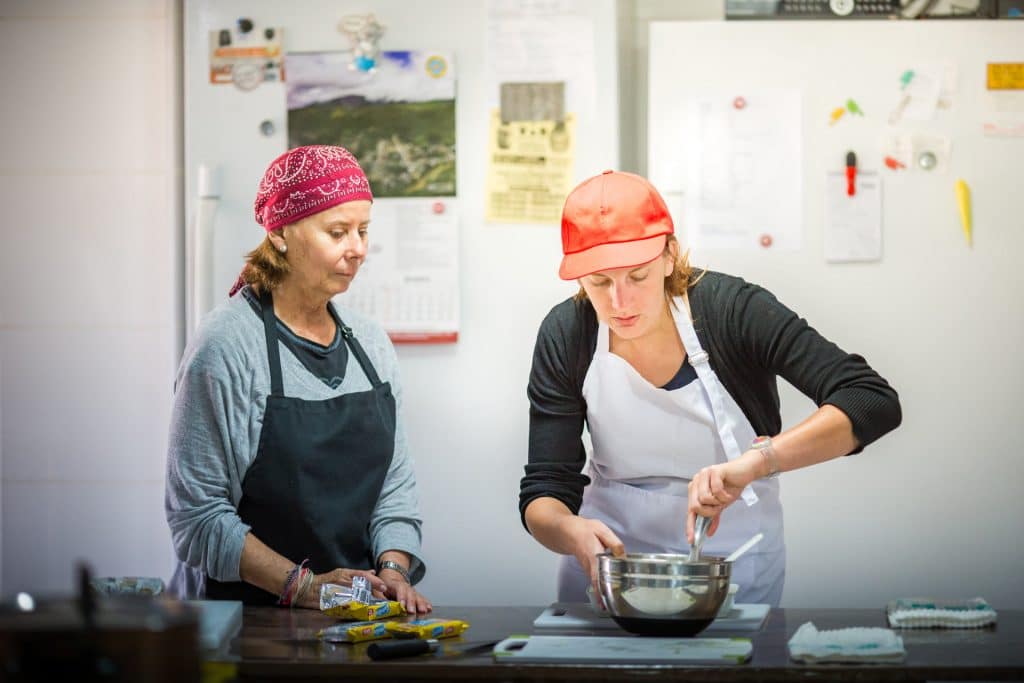 I have to recognize that everything was really delicious! Also, at the end of the meal, as it was my birthday, I had a great surprise ! I got a huge piece of chocolate cake just for me and they sang “Happy Birthday” in Spanish. I was really touched. Nora and Paul are adorable.

Unfortunately, this was already the end of our stay in Lamud, and we must return to Chachapoyas for new discoveries.

Caves of Quiocta: Departure from Lamud, or go to the hotel Tambo Sapalanchan with Nora and Paul.

This article is an English translation of the article of Voyage Peru: Recit de voyage: Sarcophages de Karajia