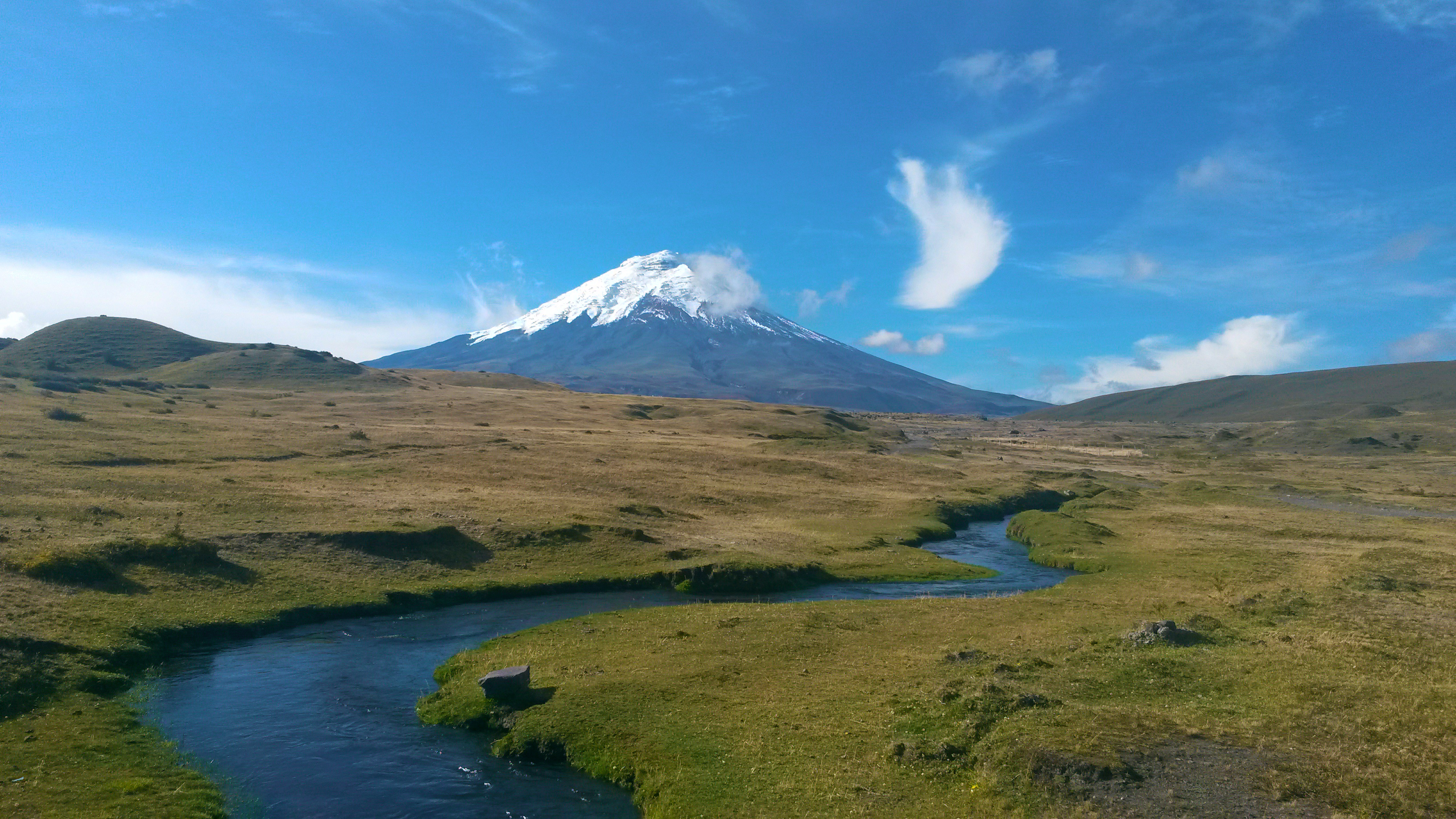 That National Parks in Ecuador you absolutely have to visit

Located south of Colombia and north of Peru, Ecuador is a rich and sublime country with varied landscapes. Between the Amazon rainforest, the Andes and the Pacific Ocean, this destination is not without charm. This is one of the countries in South America where you can visit the most beautiful national parks. Are you tempted? Come and meet endemic and rare fauna, unspoiled nature, paradise-like beaches and volcanoes with a surprising ecosystem. Here are some tips to ensure you don’t miss any of the national parks in Ecuador during your stay.

This national park is considered one of the most beautiful in Ecuador. It covers more than 28,000 hectares, which allows it to offer an incredible wealth of landscapes as well as an extremely varied biodiversity. Cajas National Park is located not far from the colonial city of Cuenca, so it is the perfect place for a day trip or more from the city.

Whether you like hiking, bird watching or nature photography, Cajas National Park is for you. It is full of viewpoints from where you can observe magnificent landscapes, including huge valleys carved out by glaciers and many lakes where the mountains are reflected. The Cajas National Park has more than 250 lakes. Also, more than 1,502 species of birds and almost 145 plant species have been identified inside the park.

The best way to discover Cajas National Park is to do one or more trek (s) or hike (s).

For example, you can take the hiking trail that crosses the Llaviucu Valley and goes up to the viewpoint Tres Cruces. This path takes about an hour and a half and will allow you in particular to discover the tropical forest of the Llaviucu Valley (where you can meet toucans) as well as Lake Llaviucu. As for the watchtower, it is located at around 4,200 meters above sea level. Up there, the climate changes to become less humid and colder. You may have the chance to come across alpacas and llamas.

Another hiking trail allows you to discover no less than ten lakes. It takes between two and three hours and climbs to over 4,000 meters above sea level.

To visit Cajas National Park, you can book the services of a guide, who will take you on the most beautiful hiking trails and tell you about the park, its fauna and flora. Through a local agency, you can benefit from transportation to get there, a guide and a meal for only around fifty euros.

2. Cotopaxi National Park, one of the most famous national parcs in Ecuador

This park was created in 1975 around the Cotopaxi volcano, in order to preserve the flora and fauna established on the sides of the volcano and in its surroundings. It covers more than 40,000 hectares and encompasses four different climatic zones: the humid forest, the páramo of the Andean highlands, the tundra and the eternal snow. It is recommended to visit Cotopaxi National Park between July and December, when the temperatures are milder and can reach twenty degrees. The rest of the year, temperatures are much colder and can drop to minus ten degrees. We therefore recommend during this period to visit other national parks in Ecuador.

Cotopaxi National Park also offers extremely varied landscapes, between forests, glaciers and lagoons. You can visit it on foot by taking the many hiking trails or by bike, following the paths.

There are many things to see within Cotopaxi National Park. From the José Ribas refuge, more than 4,800 meters above sea level, you will have a bird’s eye view of the Cotopaxi volcano. During your visit, you will also be able to see ruins testifying to the passage of the pre-Columbian civilization of the Puruhaes. If you are passionate about astronomy, spend the night in one of the park’s refuges or camping spaces and take the opportunity to go to the astronomical research centre at night: from here, you can enjoy be surrounded by nature, far from the city lights, to observe the stars.

Cotopaxi National Park is also known for its diverse flora and fauna. With a little luck, you will be able to see deer, pumas or, more rarely, condors. Just open your eyes!

This volcano culminating at an altitude of more than 3,900 meters has existed for over 40,000 years. This has allowed it to shape and evolve over the millennia, to become today one of the most interesting national parks in Ecuador.

The Quilotoa volcano is located south of the Western Andes Cordillera. Today it is inactive. This site is notably known for the very beautiful lagoon which is located inside the crater of the volcano. You can discover this natural wonder during a must-see trek for hiking enthusiasts. Known as the “Quilotoa loop”, this trek takes between three and five days and allows you to cross sublime landscapes, observe the volcano from breath-taking viewpoints and discover the incredible biodiversity of this natural Park.

The Quilotoa loop can be done on foot or by mountain bike. It starts at 3,920 meters above sea level in the village of Quilotoa. First you will visit its charming streets and its local craft market. You might then climb to the top of the crater of the volcano. The crater rises to more than 4,000 meters above sea level. Once you reach the summit, your efforts will be rewarded by the panorama of the summits of the Cotopaxi and Illiniza volcanoes. Looking down, you will also see the lagoon at the heart of the crater. You can even get there by taking a hiking trail that leads to the water’s edge. The hike takes half an hour. Once down, know that you are not allowed to swim in the lagoon. But there are other possibilities for activities, including the rental of paddle boats on site.

To make the most of the landscapes offered by the Quilotoa volcano, also follow the hiking path that will take you all around the crater. This trek takes four to five hours and is worth it for its beautiful views of the surroundings and the Quilotoa lagoon.

4. Yasuni National Park – one of the most talked about national parks in Ecuador

Located north-east of Ecuador, in the heart of the Amazon rainforest, Yasuni National Park has been an area preserved for decades. Indeed, this park was created in July 1979 and ten years later, it was declared a Biosphere Reserve by UNESCO. It is now one of the most important protected areas in Ecuador.

Its fauna and flora are extremely diverse, making it one of the richest nature reserves in the world. There are almost 110 species of amphibians, more than 100 species of reptiles, about 200 species of mammals, 610 species of birds and more than 260 species of fish. Many animals and plants present in this park are endemic to Ecuador or very rare and endangered. You will be able to come across in the Yasuni National Park animals such as pink dolphins, caimans, mongooses, jaguars, armadillos or bats. In terms of vegetation, more than 4,000 species are listed. They include some species of medicinal plants used in ancestral ways by pre-Columbian civilizations.

The best way to visit Yasuni National Park is to participate in an excursion organized by a local agency. In general, the excursions offered last two to three days. They offer to discover this natural reserve through a complete itinerary including many essential activities and experiences. For example, you will have the opportunity to travel in a canoe by following narrow black water canals. You can follow your guide on hikes, take part in night walks, visit a parrot reserve, observe the toucans or take a tour of the cultural centre of Napo.

Yasuni National Park not only has an incredibly rich biodiversity, but it is also recognized as an important oil deposit. Today, the park is protected by the Ecuadorian government. This is in order to avoid deforestation as much as possible due to oil exploitation. Since 1992, a safeguard plan has been put in place. Its objective is the preservation of the natural resources of the place by promoting ecotourism in particular.

This park opened in 1979. Located on the west coast of Ecuador, it encompasses two main areas: one maritime and the other terrestrial.

The maritime part of this national park essentially includes the small island of La Plata and its marine surroundings. If you visit Isla de la Plata between June and September, you may have the chance to spot humpback whales offshore. The waters of Isla de la Plata are also recognized as an ideal place for snorkeling. The small island is accessible by boat after a crossing of about an hour. On site, you can take a hiking trail that allows you to observe blue-footed boobies, a species of seabird very present on the island. From Isla de la Plata, you will also be able to enjoy very beautiful panoramas of the Ocean. If you are at the right time, scan the waters for a humpback whale!

On the land part of Machalilla National Park is Playa de los Frailes, a sublime beach but also very calm. A walking path will take you to other beaches: Tortua and Playita. You can come across red crabs as well as sea turtles.

Within Machalilla National Park, it is also possible to meet the community of Agua Blanca. Those members are relatively few (around 300) and remain very attached to Native traditions. It is the occasion to observe ruins dating back to the pre-Columbian period and which once belonged to the Manteña civilization.

Finally, Machalilla National Park is also known for its sulfur lagoons, where you can swim if you are brave. It is for sure one of the most diversified national parks in Ecuador.

6. Galapagos National Park – one of the best known national parks in Ecuador

The Galapagos volcanic archipelago was declared a National Park in 1959. Today, almost 97% of its surface is protected. This group of nineteen islands (of which only four are inhabited) and several dozen islets is located approximately 1,000 kilometres off the coast of Ecuador. Tourism in the Galapagos is highly regulated in order to best preserve the incredible ecosystem of this national park.

Classified as a “Living Museum and Showcase of Evolution” by UNESCO, the Galapagos Archipelago is located in the heart of a marine reserve that is among the largest in the world. It covers 138,000 km² and is home to a large number of fish, shark and sea turtle species, some of which are rare and endangered. This reserve has been classified as a “Marine Sanctuary”, which means in particular that fishing is prohibited.

A stay in the Galapagos Islands is a pretext for many activities: lazing on paradisiacal beaches with white sand and turquoise waters, snorkeling or diving among Manta rays and fish in the heart of the marine reserve, surfing or even watching black iguanas on the beach at Tortuga Bay, on the Island of Santa Cruz.

The must-see islands in the Galapagos are those of Santa Cruz, San Cristobal and Isabela. However, the lesser-known islands (Santa Fe, Espanola, Floreana, Fernandina and Bartolome) also offer very beautiful postcard-like landscapes.

To visit the Galapagos archipelago, the best way is to book a cruise that will take you to each of the islands. From the boat, you can enjoy beautiful views of the Galapagos National Park, the Pacific Ocean and the long beaches of fine white sand.