Floods in Peru March 2017, can you visit the country now?

Floods in Peru March 2017, can we visit the country now?

Now everybody is talking about Peru, but this time not because of Machu Picchu. Resident in the country, I have to mention the floods in Peru. Which now seem to paralyze our host country.

Let us return very slightly in time. An exceptional phenomenon El Niño was forecast for the end of 2015, early 2016. Lima even had to take the risk of denying the organization of the Dakar 2016.

In addition, for months they were preparing. The main works had been put in place throughout the country with a lot of money to show that we were organized.

They had even finished the school year a month earlier. Pupils were given over three and a half months of summer vacations. As a result, there were heavy rains on the coast, but it was not the announced disaster. Well, this was not so bad, right? and important works had been done such as cleaning rivers and the edges of the rivers to deal with the devastating effects of El Niño. At least that is what they had  told us.

El Niño 2017 : Surprise and lack of preparation before the arrival of the catastrophe

March 2017. We have not been informed about El Niño this year. But then in that case, what was happening? Where did the rains and the torrents of mud come from?

Even at first, we came to think that it was not the phenomenon El Niño. Probably to justify the lack of warning or prevention. However, the symptoms are well recognized, to know the warming of surface waters in the Eastern Pacific causing on the coast the torrential rains and also the very well-known landslides.

El Niño : An old and unfortunately too familiar phenomenon

El Niño is an integral part of the history of Peru. It is said that it was him that has caused the disappearance of pre-Columbian civilizations. Trujillo had already been largely destroyed in 1925.

This phenomenon mainly affects the coastal zone, which is the most densely populated. 77 % of Peru’s population is urban. Apart from Arequipa, the largest cities are on the coast, Lima, Trujillo and Chiclayo in particular. Sometimes, it has been built in areas of non-compliance with flood risks, regardless of any urban program, without any plan of drainage or evacuation zone of rainwater, which, as in all tropical countries can be very violent.

There is no doubt that like in most of the disasters of the past, we try to find the culprits, those responsible at least. You cannot always put everything on the back of the rampant elements. We have already talked about poor quality structures, misuse of money…

In short, if the weather should improve in a few days, the political storm should continue for some time.

Can I visit Peru now?

The answer is YES. Specifically, as the help has already begun. From everywhere, initiatives pop up to help raise funds for people who lost everything on the coast.

As for those planning a trip to Peru, do not cancel. What better way to help by bringing foreign currency? No, do not cancel; on the contrary, the people Peru that need your stay, will welcome you with open arms.

The affected areas are mainly the neighborhoods of Lima, the pacific south coast of Lima and the North of Piura.

However, as often during this phenomenon, affecting the coast does not necessarily reach the other regions. Peru is also Cusco, Arequipa, there is the region of Amazonas, there is Chachapoyas…

When you read “North”, you must remember that the Andes and continuing beyond to the east, is still the “North”. There are other regions, these include Amazonas where you can visit Kuelap and Gocta including the regions of San Martin and Loreto, the Amazonas river… All these regions are not affected by the disaster.

Although it is currently impossible to follow the coast by bus, these regions are however easily accessible by air, from Lima to Jaen, Tarapoto and Chachapoyas, or even Iquitos.

Yes, it is raining, but we are in the rainy season and this season has its fans and its charms. Do not leave Peru in the alarmist tone of the Embassy that often unfolds this great “Principle of precaution”.

You can help Peru with this event

For those who do not travel currently, you can help in another way. Many initiatives have emerged, I will talk about the Red Cross, or Flora’s initiative. (You have already read an article written by her in our blog.) 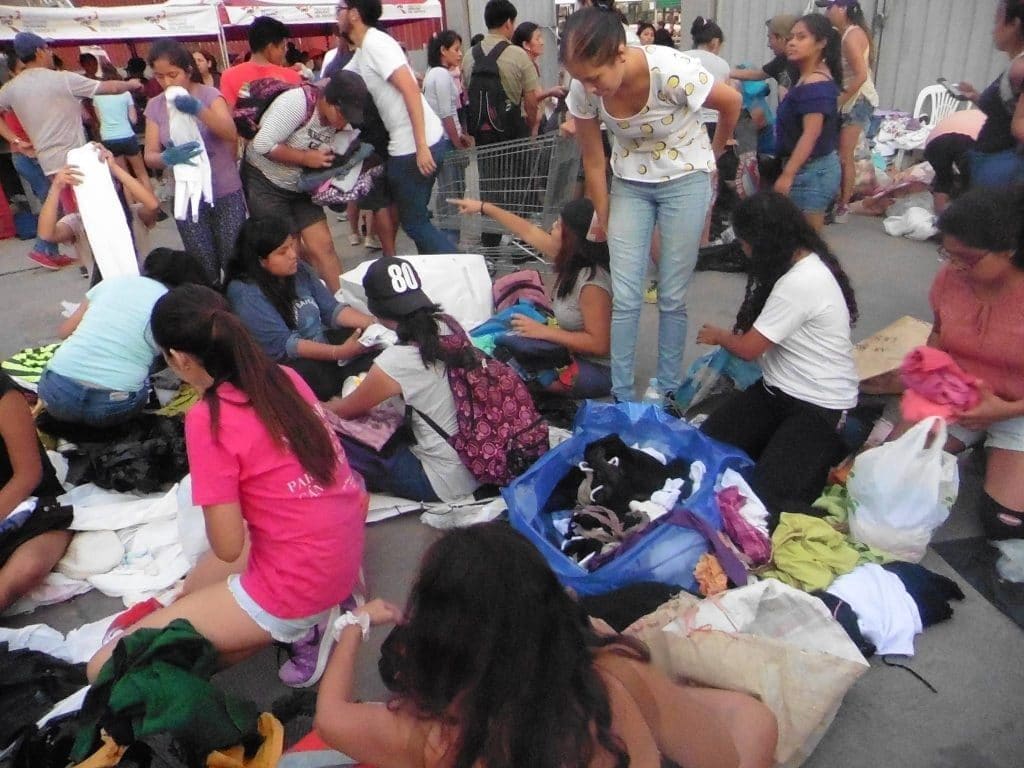 Inside the coliseum, the real work begins: all the donations received must be prepared. Here, we unwraps clothes and distribute them in tagged bags: woman-winter, woman-summer, girl-winter, girl-summer, boy-winter, boy-summer, etc,etc.

In Chachapoyas, and in many other areas not affected by the disaster, fund-raising events are organized, to collect mostly basic items, cloths for the people who have lost everything.

Tonight, Wednesday March 22, we will go to the concert on the Plaza de Armas of Chachapoyas, where everywhere can give clothes and shoes to the inhabitants of Trujillo.